Goddamn, this team fails and flails (as BB says)

history of employing an undocumented immigrant in his household for years

No problem for Trump though (i.e. Melania)

and not paying taxes until much later

And who the hell is called Puzder even.

The people who read the National Review are NOT the ones who voted for Trump in the Primaries and they’re not the voters that the “establishment” Republicans are afraid of.

It’s a sad day in America when someone who has spent his entire adult life marginalizing, weakening and cheating labor can’t even be secretary of it.

We had our own experience with a proto-Drumpf, 40-odd years ago. 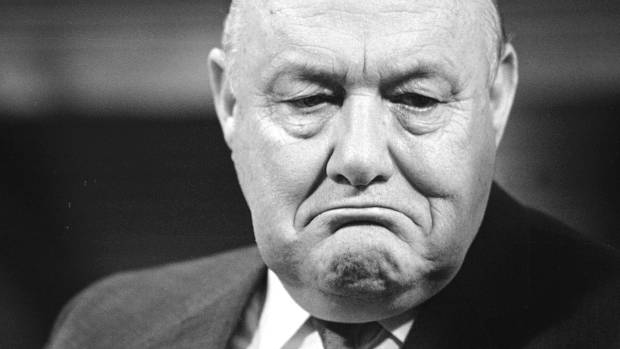 OPINION: Sure, he wasn't as outrageous. But he was rude, frank and once got naked at a cocktail party.

He lasted a very long time in office. What may be even worse, though, is the longevity of his support. If you read the comments^ below the article you’ll see there is still no shortage of folk who think the poison dwarf was wonderful. Sir Robert David Muldoon GCMG CH (25 September 1921 – 5 August 1992), sometimes known as Rob Muldoon, was a New Zealand politician who served as the 31st Prime Minister of New Zealand from 1975 to 1984, as leader of the governing National Party. Muldoon was a Minister of Finance (a portfolio he also held while Prime Minister), a prominent member of the National Party and MP for the Tamaki electorate in Auckland prior to becoming party leader in 1974. During his time as a member of parliament and ...

^ PROTIP: never read the comments on Stuff, unless you happen to enjoy weeping for humanity

Errrr… The National Review has been pretty far from Trump’s corner this whole time.

Donald Trump leads the polls nationally and in most states in the race for the Republican presidential nomination. There are understandable reasons for his eminence, and he has shown impressive gut-level skill as a campaigner. But he is not deserving...

They’ve toned it down a tiny bit since he won, but only slightly. Looking at articles on their front page today (it’s not like I read the damn thing regularly), it’s clear that they take it as a given that Russia attacked the Democrats, and take it as given that Trump and his administration have tighter ties to Russia than their pretending. And they’ve referred to the Muslim ban as “a festival of incompetence and cruelty.” These aren’t Trumpistas’ talking points.

The NR represents establishment Republicans, who have hated Trump since the beginning.

I think of them as foundering and floundering.

If “puzder” isn’t a Yiddish penis synonym, then the Ashkenazi need to get on that.

Heh what a coincidence:

Trump’s been feeling the stress. So he’s scheduled saturday to be fellated by a crowd of magats.

This is your captain speaking… do not rush for the lifeboats … women, children, Red Indians, spacemen and a sort of idealized version of complete Renaissance Men first!

Trump’s been feeling the stress. So he’s scheduled saturday to be fellated by a crowd of magats.

He’s so gross and silly all at once. It’s quite a trick.