I’m wondering if in part, this isn’t just people mourning the Queen, but a general outpouring of grief and fear.

The UK is in a wretched place. It has lost nearly quarter of a million people to Covid, in no small part because of a thuggishly incompetent government led by a smirking inadequate. Many of those people died and could not be commemorated adequately as funerals and memorial services were restricted. If there is going to be a national memorial or monument to Covid, it will inevitably involve the self-same politicians who helped turn a challenge into a catastrophe, and that cannot comfort those who have lost so many people and still feel bereft.

Beyond Covid, the catastrophes keep mounting. On top of the self-inflicted wound of Brexit, we have perhaps the most ideological government in history led by a Prime Minister who is clearly out of her depth, divorced of any true empathy and hell-bent on delivering policies that will benefit only a tiny minority at colossal expense in money, prestige and international relationships. Rather than try to build bridges, the new government is antagonising our neighbours to the West and the East as well as picking unnecessary fights with the US and China.

The country heads into a terrible winter having squandered trillions in North Sea oil revenue. A country that was until recently an energy exporter has no energy policy. The party of sound government has let inflation run rampant, borrowed irresponsibly and refuses to tax those who have gorged themselves on commodity prices and the public purse. After 12 years in power when the economy has barely grown; the same long-standing issues of housing, health, education and transport remain and there is no money to fix any of them. Not forgetting that there are questions that cannot be dodged any longer of whether the Union itself can survive as Scotland, Northern Ireland and Wales start to set their own courses away from that dictated by Westminster.

So perhaps we’re all feeling lost because all the constancies of the post-War settlement have gone and we are starting to realise that the UK has to find its place in the world and deliver for its people in very little time otherwise it will break - and not necessarily peacefully.

It’s natural to be afraid.

I wonder if she’ll be dead tomorrow

However, on the plus side

At my aunt’s funeral, one of her friends played the pipes at the graveside, amazing grace, and walked away as he did so… we all lost it, as you might imagine.

I wonder if she’ll be dead tomorrow

I’m sure there will be more news about it, have no worry. 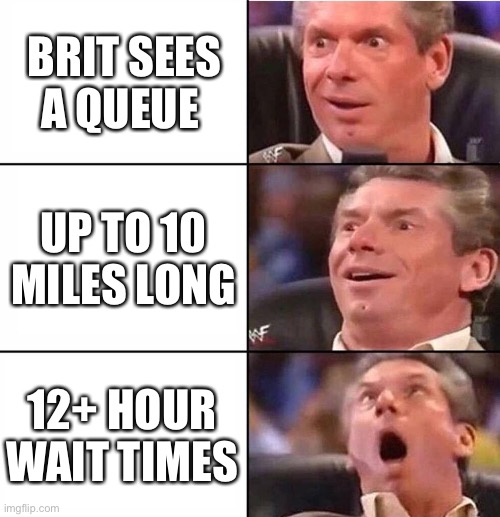 Same here but it would be the handling of Her Majesties corpse that we would find amusing. Is there a royal mortician? Whom lumps Her Majesties body from bed to casket and whom applies that final touch of lippy and what colour?

I’d have liked if part of the journey was by boat. Then this article could have been called “QE2’s last voyage” for maximum confusion.

Probably why the funeral committee didnt ask me what I thought.

You are a treasonous poltroon deserving of the most vicious attentions of the Rouge Dragon Pursuivant.

(And as a duly appointed member of the honourable order of pedants - displaying my medal proudly, below…

…I want to know who you think ‘whom’ is, too. The standard ‘who’ was all that was needed, in both instances.)

I think the answer to this is adult diapers. Or astronaut diapers, if you want to jazz it up a touch.

Ah ha! So that is the “COLOR” that will tint HM’s lips!!
(how did I go on the caps and apostrophe… as well as my need to ‘bracket’ an aside and not really know where to put the question mark)?
(Should i have capitalised ((English spellin’)!) within the bracket-s (sorry the pytnon was a genuine mistake)))
Wanna be my pen pal?

You are making an assumption about my “old chap” status and as you should be aware that makes an “ass out of u and mption”.

Also, I forgot to mention:

Should, of course, have been “Her Majesty’s corpse”. Unless there was more than one of them. Zombie Queens? Well, it would have been “their Majesties’ corpses”

So, not content with abusing the earthly remains of long-lived Liz, you abuse her very own language. She did own it, you know. It wasn’t called “The Queen’s English” for nothing. Still, I guess it’s Chas’s now, and I expect he’ll be wanting to modernise it, or slim it down in some way.

PS The question mark goes inside the parentheses if that is where the question starts. I have no idea what a ‘pytnon’ is.

Spellcheck said it was the correct spelling, I need a correct word checker.

The Death is irreversible. 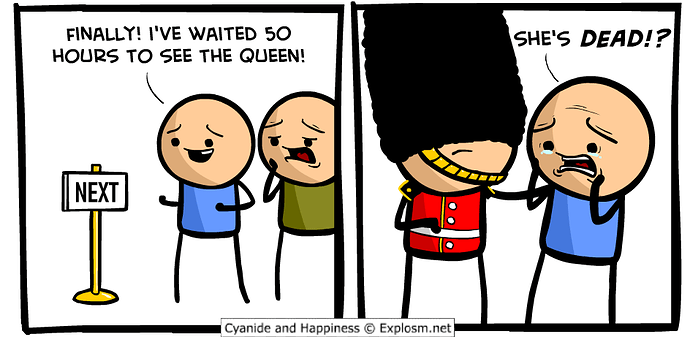 LOL, I know but I couldn’t let that one pass without sharing the image with everyone.

The amazing thing here is that Operation London Bridge has been on the books and routinely updated since the 70s. Someone’s job has been to plan, organize and prepare for this event. Probably a whole office of civil servants, for 50 years. Imagine the poor schmuck who spent his life in that department, devoted his life to it, and retired last summer.