Guess it was too on the nose to say pigs broke in and “ate” it all.

He said the police had no expertise in dealing with the matter as the rats were “too small”. The only way to protect the seized goods from “such fearless mice”, he added, was to auction the drugs to research labs and medicine firms, with the proceeds going to the government.

Or maybe legalize marijuana, so there’s no issue in the first place?

“Oh wow, guys, I know. What if we all braid our tails together?”

To be fair, I have seen a rat snaffle a bud that someone put on top of it’s cage while they patted their pockets down to find a lighter, and the little fucker would not give it back. It ate the whole thing and was zorched for about 3 days.

“Hey Mikey, what happened to all the weed in the evidence locker?”
"Uh…uhhhhh… Rats ate it. Yeah, it was rats 100%.

“What about the ROUSes?”

“Rodents Of Unusual Stonedness? I don’t think they exist --”

show me the video footage of this rat problem because i call BS.
according to a google search, a rat eats about 15-20grams a day. it would take 55 rats a year to go through that much (400Kg).
now, a PIG goes through 5-7 POUNDS a day which ONE pig could do in less than half a year.
i think they have a pig problem NOT a rat one.

Came here to say exactly this, but you beat me to it good sir

Rat, “Once you start nibbling, it is difficult to stop.”

The only rats that the cops know how to deal with are the ones who try to go public with the story of what really happened to the drugs in that evidence locker.

Even if we graciously pretended, for the sake of argument, that this was vaguely plausible; just how slowly does your criminal justice system have to be moving for literally hundreds of kilograms to be outright consumed by rats before you can get it into evidence?

Sure, if you plan to safely eat something it doesn’t take much time at all to reach the ‘repulsive fecal compromise’ stage of rat infestation; but outright disappearance, of the kind that would actually make evidence unavailable rather than just gross, implies some combination of truly dire rat problem or substantial delay.

The same thing happened in Argentina in 2018.
The judge did NOT buy that excuse.

The police response in court of “Oh no, we can’t show you the evidence, rats ate it” does strike me as a bit sus, immediately raising the question of whether it ended up in people’s pockets, but on the other hand: 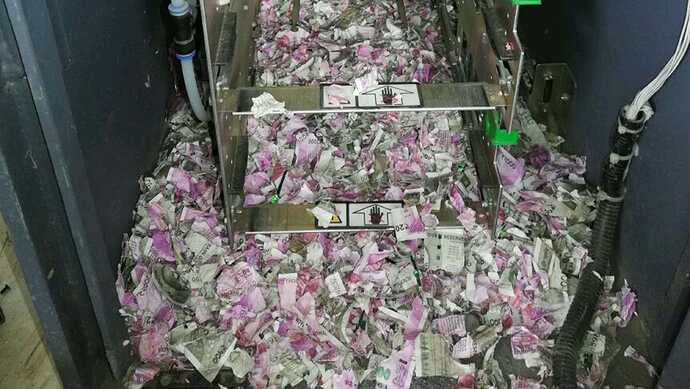 Hungry rat shreds more than $17,500 of cash inside ATM in India

At least one money-hungry rat broke into an India bank and chewed through nearly $18,000 in cash.

But there’s also the possibility that the drugs never existed (in that quantity) to begin with. Cops all over the world are rather famous for exaggerating their hauls, and one could easily imagine claiming a huge bust and then having to prove it in court, and when being unable to, flailing for excuses. Though the police request that they be allowed to sell it off immediately does suggest that it existed, but something is wandering off with it.

It sounds like India does have a significant problem with trial delays. I’m not sure how long a delay they consider to be a problem, but I’m guessing it’s at least as bad as the US, where it can take years.

“Such fearless mice” is a great name for a stoner rock band.

No problem: tell the rats that this first 400 lbs was free, but they’re going to have to pay for the next 400 lbs.

the police was lying in police stations

Here is the relevant portion. The words used around this part were just a distraction.

“What about the ROUSes?”

“Rodents Of Unusual Stonedness? I don’t think they exist --”