Mmm… Chilli and Cinnamon Rolls sounds quite appetizing to me; but, then, I like fruit in my Balti and Peshwahri Naans.

By Midwest are coast writers referring to Ohio? Because aside from 3 years in the front range I’ve spent my entire life (>40 years) living in MN, SD, or WI and have NEVER even heard of Cinnamon Rolls and Chili until the internet decided it was the new hotness thing to make fun of midwestern food.
My favorite two responses were from Alton Brown who tried it and said NOPE and that most midwestern of Convenience Stores, Kwik Trip’s. Their Twitter account said, “We sell both, but if you purchase them together you are placed on a watch list.”
Regardless, what with their (delicious) Skyway Chili (sorry, Skyline. Thanks Bunbain) I wouldn’t put anything past Ohioans. If I am slandering the good name of Ohio, I apologize, but “Midwest” is far too nebulous. I demand an actual location where this is a thing done by more people than drunks after the bars close.

Skyline Chili? or is this something even more niche?

Chili and Cinnamon Rolls are a thing here in Kansas! It was a public school occasional lunch in the mid-1990s. Typically eaten side-by-side, not mixed, dipped, or otherwise combined.

too bad this is a twitter account i won’t be able to peruse.
if conch fritters, conch chowder, Cuban sandwiches and cafecito are not “of this region”, then i call bullshit.

Which part of Kansas? I was growing up in Lawrence around then, and I never saw chili and cinnamon rolls served together.

At that time, the greater Wichita area. Since then, I’ve come across it in Manhattan and Topeka, but not as much in Lawrence.

Chili and cinnamon rolls sounds like a wonderful combination and I’ll fight anyone who disagrees. I won’t win…I’m slow and logy from all the heavy soup and pastry…but I’ll thrash about a bit anyways, before I nap aggressively at the detractors.

Cuban sandwiches are one of my favorite examples of regional food and how there’s no such thing as “inauthentic” food. Tampa and Miami both claim to be the point of origin of Cuban sandwiches, and both point to the main difference between them (Tampa’s includes salami, Miami’s does not) as proof that their version is the “authentic” one.

I grew up in Tampa, so I’m a partisan to the version with salami.

a Cuban sandwich from The Colombian in Tampa is a culinary masterpiece. no argument from me!
the mom-n-pop Cuban joints down here in the Keys offer (ahem) varied quality of sandwiches - some pressed, some not (which will start arguments!) - but the cafecito is always excellent!

The city of Calgary in Canada has a “Chinese” dish that was invented there decades ago and to this day hasn’t made it further than a couple hundred km from that city.

It’s called Ginger Beef, which is a very generic name for a very specific thing. It’s strips of beef deep-fried and served in a molasses-based sweet and spicy sauce. There will be onions and chilis in there as well. It’s my fave and I gotta have it when I’m in the area. 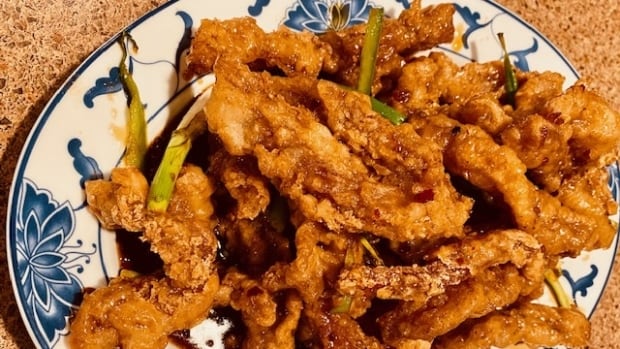 Quest for the Best: Here's the top ginger beef in Calgary, says restaurant...

The Calgary Eyeopener's restaurant reviewer, Elizabeth Carson, went on a hunt for the best ginger beef in Calgary and the results are in.

If it is Ohio, it is a southern Ohio thing. I’ve never seen those items paired in Cleveland or Toledo. We definitely eat both, but as very separate foods.

I’ve seen it in a few places in ON, not always the molasses-based sauce, but a sweet, heavily gingered, spicy sauce nonetheless.

A lot of chili recipes have cinnamon as a spice ingredient. Maybe that’s where they’re getting this combo from?

I don’t really get what’s weird about having a bowl chili with a cinnamon roll on the side though. I can’t say I’ve seen it served that way, but I figure the sugar is just going to kind of disappear into the chili like it does with sweet cornbread. Chili just kind of assimilates other flavors and makes another type of chili. That’s how the beans got in I think

Ginger Beef is on the menu of virtually every Vietnamese restaurant in Saskatoon. It was one of my go-to dishes before I stopped eating meat. It’s so good! I have made it at home a few times with good results.

I apologize, but “Midwest” is far too nebulous. I demand an actual location where this is a thing done

Here Here! Time to stop using Midwest as a catchall, especially with food which is much more regional. People in Cincinnati have a proud Chili sub-culture. Wisconsinites eat brat pattys and butter burgers. Kansas has their own style of BBQ, Chicago Hot Dogs can’t be found elsewhere, I’m sure Oklahoma does something too.