Report: Tillerson to be replaced. White House: No

Fuck him. Clint Eastwood’s chair would be a better secretary of state.

Well, with the credibility levels of most things coming out of the White House these days, looks like Tillerson is gone for sure.

This isn’t a perfect analogy, but it reminds me of those times in WW2 when experienced generals would tell Hitler or Stalin that they had it all wrong, that these armchair directives from Moscow or Berlin didn’t take into account how things were actually progressing on the ground, and it would lead to disaster. Coincidence or not, when Stalin started listening to his generals more is when things turned around in the East.

I guess I’m just saying, and this is obvious, Trump thinks he’s smarter than the people he hired to work in his administration, the people who are actually doing that work, and Trump’s basic lizard-brain urge is to fire anyone who tells him he’s wrong. He will never learn from defeats. I’m not sure results even matter to him, no matter how shitty things get he’ll just bullshit his way out of it.

He will never learn from defeats. I’m not sure results even matter to him, no matter how shitty things get he’ll just bullshit his way out of it.

You got it dead on, he isn’t capable of learning, period. He’s so amazingly stupid he believes his own bullshit. He can’t differentiate reality from the nonsense that dribbles out of his face. The purest, sweetest revenge against him would be to somehow force insight into that shit impacted skull of his. If only he could see himself for what he really is he would not be able to survive the humiliation. Sadly he isn’t bright enough to see his own reality.

I guess I’m just saying, and this is obvious, Trump thinks he’s smarter than the people he hired to work in his administration

I guess if he keeps firing anyone who shows so much as a glimmer of competence or self-awareness that might actually become true.

I would have thought that anyone they might replace him with would be even worse, but Pompeo might not be.

When the White House says, “No” it really means “Yes,” right?

Yeah, my first thought was, “Trump always finds someone worse to replace his first selection, but who could be worse than a guy who’s destroying the State Department?” Turns out, Pompeo could actually manage to be worse, amazingly: 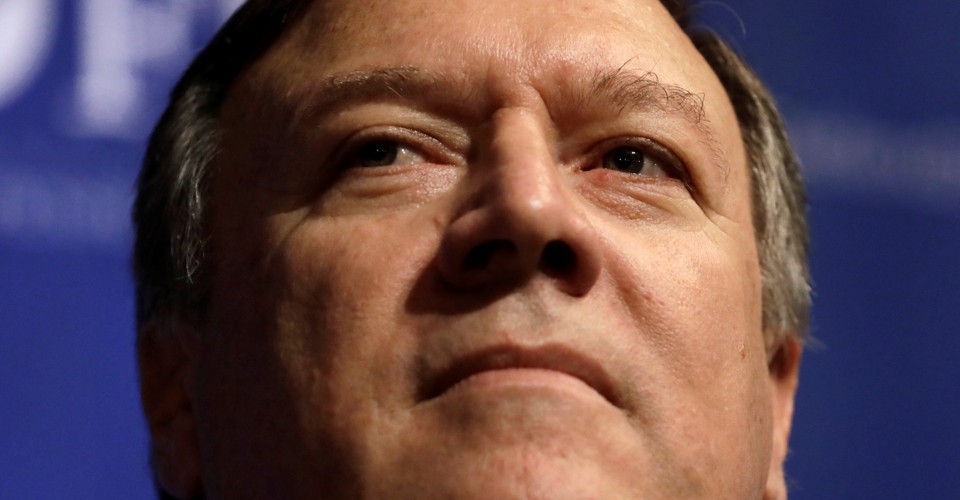 If Rex Tillerson is replaced, one barrier keeping the president in check will fall away.

Seems like Trump is attracted to those kinds of people, too. Reading about the transition, all these government agencies were waiting for transition teams to show up so they could brief them. Instead, and this was the consistent story, one guy (who was always some young business management shit) would show up, he would have no idea what the department did, and he simply didn’t care - they seemed to feel like they were smart enough they could do what needed to be done without any actual relevant information. Reading the stories, I kept being reminded of Trump…

What if the Ingsoc gouverment in 1984 was run by incompetent, shit-smeared retards.

A massive dose of lsd and laxatives?

Seems like this is all one huge game for Trump.

Those Publications Need to Clean This Up

CNN is now reporting that the CIA/State shake-up story that roiled the news this morning was in fact an effort...

Interesting quote: "…governments lie. That’s as old as the hills. But they don’t usually lie in the morning and then say in the afternoon “Yes, we were lying. Ha ha.”

What I don’t hear anybody talking about is if Tom Cotton replaces Pompeo at CIA, then the Senate is one chair closer to Democratic control.

One US official expressed confidence in Tillerson’s status due to a so-called “suicide pact” forged between Defense Secretary James Mattis, Treasury Secretary Steven Mnuchin, and Tillerson, whereby all three cabinet secretaries vow to leave in the event that the president makes moves against one of them.
— BuzzFeed News

So if Tillerson is out, will Mattis and Mnuchin soon follow?

Seems like Trump is attracted to those kinds of people, too.

They’re attracted to him, too, because they’re corrupt manipulative scumbags who know how easy it is to flatter this narcissistic case of arrested development into giving them a job and the opportunities for graft that go with it. What they miss in their arrogance is that their sweet deals can go away just as quickly when their boss is a capricious and greedy man-child with the attention span of a gnat.