.@Nigel_Farage: "You know what? [@realDonaldTrump's] not running to be Pope." https://t.co/ofpj2XX4Nh 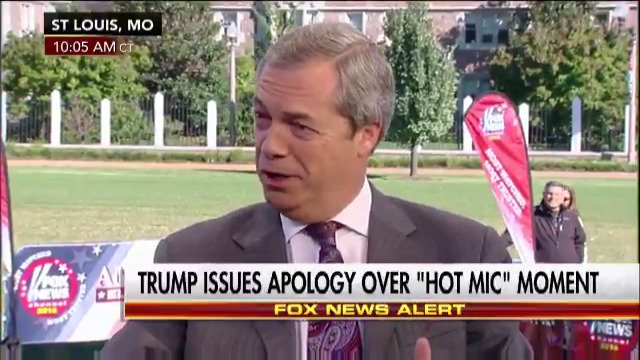 Also, this thread is worth reading:

Because it's not about the woman not wanting sex - it's about stepping on another man's property in the dude's head.

Note how all the GOP criticism is about ‘wives and daughters’.

Some Republicans have had enough: Carly Fiorina and Sen. Kelly Ayotte withdrew their endorsements today, as did Utah Rep. Jason Chaffetz.

Holy shit! Until now there has been nothing - not racism, not mysogeny, not even the nuclear jokes - that could make Republicans repudiate this man. This is huge. Especially Ayotte, who has been asked many times by constituents and media and always came back with a weasel.

The hands in that photoshop are a nice touch, Beschizza, the flag pin too. I don’t care how many nightmares you’re giving people, keep it up.

The ladies find you irresistible. You can do anything.
You told us so yourself.

Tear the party down the middle.

it’s so close… I can feel the tear starting.

The difference is that the Republicans have no qualms about starting a third party, and this third party won’t be centrist.

If the centre-leaning Republicans split off and form their own party to disassociate themselves from Trump, then we’ll have a “Republiracist” party, a “Fiscal Conservatives” Party, and then the Democrats. The FCs will be at least willing to work with the Dems, because they don’t have to pander to the far-right wing any more.

On the other hand, if the right-leaning Republicans, led by Trump, split off into a “New TEA Party,” then we have the exact same situation, only under different names.

Whichever one keeps the Republican name will obviously keep a few more voters that want to remain “loyal,” but those people should be relatively few: just people who weren’t inspired by Trump but also weren’t overly offended by him; not a significant gain to either side (except in numbers).

I think the former scenario is more likely (since Trump is the Republican nominee, with all of the power that entails, so I doubt he’ll be willing to step away from that), but the latter scenario has a better outcome (since the more moderate version will have the benefit of the numbers of the “loyal” Republicans).

Either way, there should, afterwards, be a party formed from the ashes that is more moderate than the Republican Party, as it exists today.

Trump’s going to quit. The fact that he’s claiming he will never drop out or quit tells me that’s exactly what he’s thinking about.

Maybe he’ll claim medical reasons. That when his doctor said all of his tests came back positive, he wasn’t wrong.

Or, you know, a world in which women get treated as people who are equal to white male Republicans? The sheer genius for demonstrating 19th century attitudes unselfconsciously deserves some sort of tribute bang upside the head with a clue by 4.

Are you sure about that?

If I may quote the apocalypse part of the bible with complete accuracy:

“And on that day it shall come to pass that the RINO will caucus with the DINO, and there will be heard a great ‘meh’, from the Wingnuitim.”

Can we like, buy them an island far away or something? Preferably something on fire?

There will also be a party more extreme than the Republicans, and that party will have influence. The South will go back to Jim Crow days.

Yes, but that party will be easier to fight. They can’t hide behind “At least we’re not the Democrats,” because there’ll be a “fiscal conservative” party that decent people can vote for.

It might take twenty years, but I think that that party and its supporters can be effectively repudiated. I think that their horrible rhetoric can be purged out of existence.

And I don’t think that can happen while the “We don’t want to vote Democrat” people act as an effective shield for the dog-whistlers.

It won’t go away because it hasn’t gone away. It will never go away, especially since the decent people who live there will flee to a place that isn’t controlled by fascists.

Can we like, buy them an island far away or something? Gruinard Island (/ˈɡrɪnjərd/ GRIN-yərd; Scottish Gaelic: 'Eilean Ghruinneard') is a small, oval-shaped Scottish island approximately 2 kilometres (1.2 mi) long by 1 kilometre (0.6 mi) wide, located in Gruinard Bay, about halfway between Gairloch and Ullapool. At its closest point to the mainland it is about 1 kilometre (0.6 mi) offshore. The island was dangerous for all mammals after experiments with the anthrax bacterium in 1942, until it was decontaminated in the late 20th century. The island...

Well, it was only about women. It’s not like he insulted the military or the Flag or anything sacred!

[ yes, jk, and sorry that it’s necessary to add this ]

Why blame yourself when you can blame others?

I expect a Charlie Sheen speech about how the Republican establishment stabbed him in the back and how his supporters should find out WHAT THE HELL IS GOING ON™ and hold people accountable.

I don’t know if it will be a concession speech or a dropping-out speech.

These people are called libertarians, and at least you can have a reasonable conversation with them.

He can keep him, too, with the blessings of the UK. It is a match made in heaven, or perhaps the other department.