Not surprised, but this gif is highly obligatory:

You people have to ask yourselves “Is he more dangerous grabbing pussy in the White House or outside it?” I think the answer is clear.*

I can only imagine the number of folks going on White House tours dropping.

And to these people, I say…

Totally spineless. And yet we’re supposed to think they’ll still stick up for their beliefs.

Here’s another good gif for this situation:

It’s got your tennis-match back-and-forth head action for all the flip-floppers; it’s got popcorn to enjoy the

show; and a cute kitten Chaser all in one.

I plan to vote for Mr. Trump and Mr. Pence on Nov. 8 . . . more offensive than anything I’ve ever seen

The doublethink is strong with this one.

Someone here on bbs once pointed out that if the Democrats nominated Kim Kardashian and she spouted a lot of nonsense but mostly represented the party line then Democrats would still vote for her. I don’t know, it’s possible, but I have a hard time seeing how she would even get nominated, whereas the GOP has been silently breeding the monster that Trump is for decades.

In answer to the question, I’m pointing the finger at the GOP for being partisan. I thought that should be obvious when so many Republican politicians will openly say they disagree with Trump but still support him.

Well, ok. If that helps you get through the day then shine on, you crazy diamond.

Edit: completely misread your post. Sorry. I’ll leave it here as a testament to my sleep deprived state, and as a warning in case anyone else swerves too close to making the same mistake.

I was sneaking a quick peek while at work and didn’t quite get it. 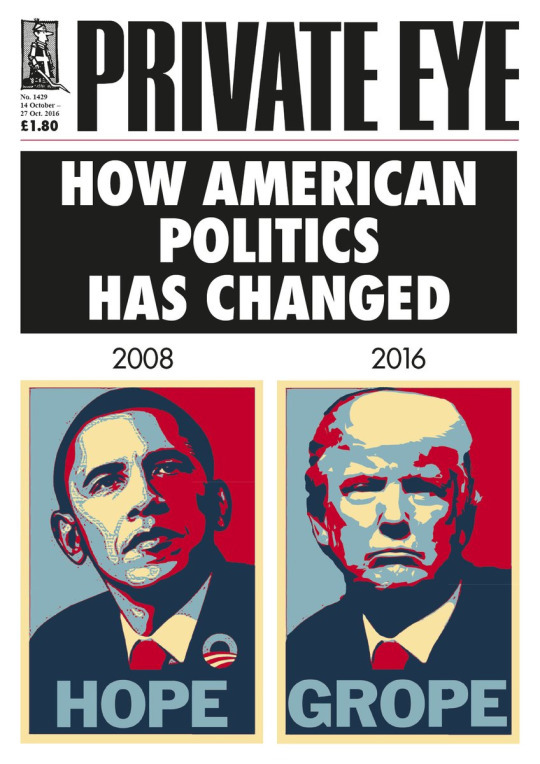 I think he’s accusing this website, which uses the public internet, of displaying bias. We better convene a Blogger Ethics Panel.

Those poor deluded fools (not that I feel sorry for them at all).

I have no idea about their local politics or how much they are threatened in the current election. But they seem to still think they can thread the needle on this - pander to the wingnuts who threaten to oppose them or not show up to vote, while also pretending not to pander to them.

I am not going to be able to relax until the votes are counted, because Diebold is still a thing. I also think the legions of Trumplings going out to ‘watch the polls’ could get a bit scary and your election night is going to be a sight to behold.

A side note: Am I the only person who thinks “Trump/Pence” sounds like British counterfeit money, and that Clinton/Kaine sounds like something you’d rub on one’s gums?