One time at Dragon Con, I found myself in a revolving door with Kenny
Baker. He was trying to get leverage to move the door, and I stopped in
surprise at seeing Kenny Baker on the other side of the pane of glass.
For a moment, it looked like we were re-enacting the Kirk-Spock scene
at the end of Wrath of Khan. 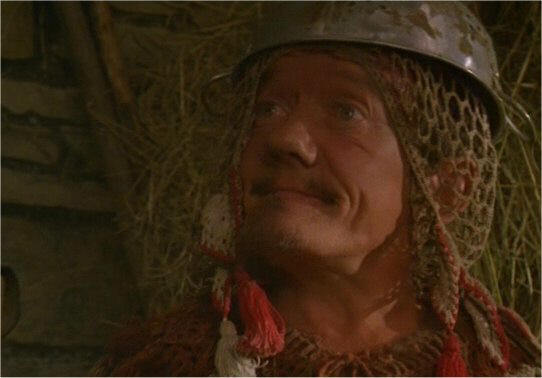 R2D2 may be what he’s best known for, but to me he’ll always be Fidgit. Hail and farewell Kenny Baker.

"He had a very long and fulfilled life. He brought lots of happiness to people and we’ll be celebrating the fact that he was well loved throughout the world. We’re all very proud of what he achieved in his lifetime.”

Now that’s what I call a good motivator.

Goodbye Kenny, and thanks for all the fun and joy and wonderment.

And now, the rest of us will brace ourselves for tomorrow’s editorial cartoons, with panels of R2-D2 at the Pearly Gates in Cloud City, or an R2-D2 shaped tombstone, or something like that…

i’m not the tallest guy, and when i was a kid i took a lot of jibes for being short/small. when star wars came out, and everyone realized that kenny baker was R2, suddenly being short or small wasn’t such a bad thing. he made it cool for not just little people, but short people, to be short. i am sad to hear of his death – he changed my childhood in more than just the obvious “being in star wars” way. cheers, sir, and thank you.

Rest in peace Kenny. The force will be with you always.

I met him once and got his autograph. And his lovely wife. He was very personable though I had a very hard time understanding him. I am not sure if it was the accent, or maybe he had a hard time talking because of his age. I too liked him in some of this other non-Star Wars roles.

He was very personable though I had a very hard time understanding him. I am not sure if it was the accent, or maybe he had a hard time talking because of his age.

Probably just all those chirps and whistles.

If only you had a protocol droid with you to translate

Loved him in Time Bandits! In episode 4, I could see his performance when he’d operate R2’s legs, those silver accordion tube were the giveaway. But other than providing a name to fill the role, was he really inside the droid for the prequels? If they could use CGI to make the droid fly, hard to imagine they’d need the guy inside anymore.

I have to wonder who they’ll introduce as the new man in the box. Maybe they can sell Peter Dinklage on the role, give him a Cortana-style avatar…

(Mustn’t… make… distasteful joke about Kenny Baker in a box…)

A longtime pet peeve of mine regarding Slate’s Android app finally gets to be trotted out as a less-than-perfectly-tasteful joke:

Kenny Baker Apparently Too Tall For His Own Obituary Photo On Slate. 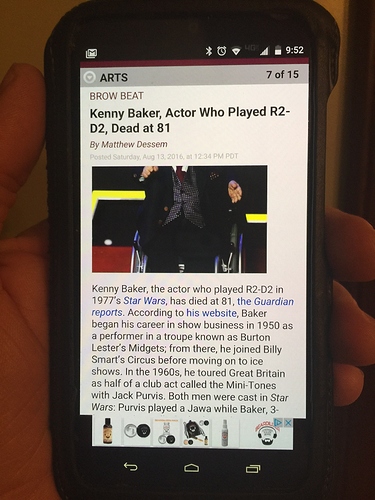 But seriously, folks, I’m gonna miss the man. May the Force be with him.