I’m 53, so solidly Gen X. I collect comic books, I love the MCU everything, I collect other stuff, I play board games, I play video games, I’m taking guitar lessons, I bake bread, I can grill up some mean ribs, I go to law school, I’m a caregiver, and the day I stop doing things that bring me joy is the day I will die. There isn’t one damn person in the entire history of ever who, on their deathbed, has said, “You know…I really should have had less joy in my life.”

In our house, it’s the Enterprise A. And an X-wing.

Many (most?) of my hobbies as an adult are things that I couldn’t afford as a child. Now I finally get to do them!

Same here. I finally went to Disney in 2019. A friend was getting married in Orlando, and as a kid we’d never had money to afford any sort of trip, so I took advantage and went early because now I can afford such luxuries. Spent 4 days at the various parks. It was fun. Not enough of a Disney fan to want to run back anytime soon, though the new Star Wars stuff interests me (but not that overly expensive 3 day cosplay hotel).

If you want to go to a place that’s just for kids, go to Peppa Pig Theme Park (Florida) or Peppa Pig World. Disney’s most famous IP is very old: Mickey Mouse is 94, It’s A Small World is 58, Pirates is 53, even Space Mountain is 47. The people who grew up with Disney parks see them almost as a heritage attraction: a place designed in the 1950s that harked back to the “good ol’ days” of the 1900s.
Bringing in Pixar IP lowers the age a bit, but most Pixar films are watched by people under 10 and over 30. Disney’s Star Wars acquisition has brought some of the younger generations into the fold but Star Wars Universe content on Disney+ is all dog whistle nostalgia for Gen-Xers and Millennials.
The Disney corporation has managed to keep product quality high, whatever the economic circumstances (I personally love 101 Dalmatians, its more print-cartoon animation style a result of using photocopying rather than hand-painting) but its primary aim is making a profit. Kids don’t have money. I got made redundant from the best job of my life when the popular science magazine I was writing for got closed, despite exceeding newsstand sales forecasts. The trouble was, our average reader was 12, and 12 year olds have no cash.
Disney will always want its parks to be a family-safe environment but it is increasingly targeting an older demographic because very few young families, saving for a mortgage deposit in an era of ridiculously inflated property prices, can afford the luxury of a Disney vacation.
And not wishing to erode my central argument: Disney has always targeted adults without children. In 1979, when I was seven and my brother was about 18 months, my family arrived at the Disneyland Hotel in Anaheim to find our room had been double-booked. We were bumped up to the Honeymoon Suite, which had a large, circular waterbed in the bedroom, and housekeeping put a cot and a child’s bed in the living room. Generally speaking, in 1979, honeymooners didn’t have children in tow.

Speaking of which - there’s a bit in Bertrand Russell’s autobiography where he speaks about how he - a precocious and unhappy child - was told by some well-meaning adult relative that these were the best years of his life, and how it was the cruelest thing that someone could say to him. Russell goes on to say that thankfully it was not true, and that he has been enjoying his life more and more over the years.

I remember when I was in HS and someone (don’t know who) told me that these were the best years of my life and to cherish them. OK.
It didn’t take too long for me to realize “that is complete bullshit”. At least for me. Maybe for some folks who peaked then on a personal level.
Surviving as you age definitely has some ups and downs, but… thus far, my 40’s and 50’s have been great.
I guess it may go hand in hand with actually maturing and realizing that you don’t know shit. And neither does anyone else. It’s just that as you get older, you realize it’s ok not to know shit, just do your best.

This and the rest area outside Soarin’ in GCA are great places to do things like write blog posts.

Disney parks have a lot of energy that some people just thrive on. Danny Hillis, the founder of Thinking Machines and later a Disney imagineer, was stuck writing his doctoral thesis on massively parallel processors. He checked into a Disneyworld hotel and started writing a chapter or two a day. He said just being there did something to his brain. It’s no surprise he wound up working there.

I visited Disneyworld with my parents as a kid and greatly enjoyed it, but my second visit was in 1979 right after Apple’s IPO when Steve Jobs threw open the park to everyone at the NCC - I believe - which was held in Anaheim. Even with all those computer folks running around, the park was empty enough so that there were no lines even on the E-ticket rides. (That’s how old I am.) I joined a group of friends I had met over the internet, and we rode every roller coaster in the park.

The best part of being an adult is not needing other peoples’ permission to do exactly what I want.

I've looked into this, and I can't figure out a way to do it cheaply. And I guess it wouldn't be sanitary.

I have more of a problem when parents take their kids to a grown-up happening than an adult at a Disney property.

I don’t generally have an issue with that either. For example, I don’t get why some folks think it’s a bad idea to bring a young child to an art gallery. Where do people think adult art lovers come from?

(they also have a food and wine festival

The last time I went to Disney World in FL was to attend one of those events. We joked that Mickey lured us in with

! Decided to make it a week-long trip and check out Universal Studios, too.

I’m sure theme park marketing departments and regional tourism groups would be very upset if adults without kids decided they weren’t welcome anymore and spent their vacations (and money) elsewhere.

Or maybe their parents couldn’t afford to take the whole family when these “Disney Adults” were kids, but now they have some money of their own?

Many (most?) of my hobbies as an adult are things that I couldn’t afford as a child. Now I finally get to do them!

So much this. I have a bunch of hobbies/past times that I longed to be able to do as a kid and either couldn’t afford or couldn’t convince a parent to get involved if some sort of adult supervision was required. And some of those I got a chance to share with my kids (rockets! chemistry!), while some are just mine (synthesizer music! mosaic!).

I used to hear asides like “are you doing this (assumed childish pursuit) for the kids, or is it really for you?” which still pisses me off, because usually the answer is “both”, and when it stops being fun for the child, they’ll wander away and leave me happily to it.

Yes, because the proper way to be an adult is to buy a bunker, hunker down with guns and survivalist food and prepare for the apocalypse. I know the author self-proclaims themselves to be a Disney adult, but this is such boomer hand-wringing. I wonder who created a world so shitty that millennials and below had to find an escapist fantasy simulacrum to soothe them from the trauma…

Disney in Florida is off-brand Disney. True Disney is in California. Change my mind.

As someone who grew up in Southern California with Disneyland, I mostly agree. It’s Walt’s park. However, there are things in WDW that are superior to DL. The Haunted Mansion in Florida is, IMHO, superior to DL, except with the Holiday overlay which has never come to Florida. With Mickey’s Philharmagic, the WDW 3-screen version blows away the 1-screen hack. Also Mickey’s Runaway Railroad shows the magic that is trackless (coming to DL next year). Also, WDW still has the Country Bears!

On the other hand, Pirates in WDW is half (literally) of the DL version.

Rachel Bloom, star of Crazy-Ex Girlfriend literally did this in her house a few years ago 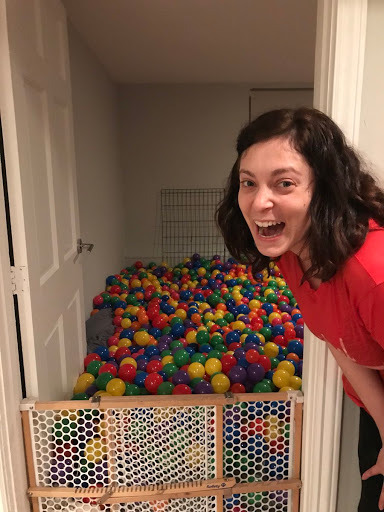 Well, she is a millennial. (As is Randall Munroe)

I’m 48 now, still happily single having chosen to opt out of the whole breeding thing, and still happily enjoy everything that I have done for my whole life.
I still play video games, still read predominantly sci-fi and fantasy, still play the guitar, still listen to music (both new and old, contemporary and classical.)

Yet wider society still seems to go out of its way to try and shame me and people like me for our lifestyle choices (as @gracchus notes).

Last time I went to Disneyworld in Florida was when I was 14, but I’d love to go again, despite my resentment of Disney the corporation. My relationship with Disneyworld is very much like Cory’s.
The amount of work, ingenuity and enthusuiasm that goes into the park is spectacular.

We looked at doing this in our sunken cafeteria area at work for an event. It was super expensive. For reasons that we were not able to figure out, those ball pit balls are crazy expensive. I suspect it’s some sort of captive-market or lacking-of-competition situation that you find in weird niches of the economy. It’s also that, much like flooring, the price sorta seems okay until you start doing the math because you don’t realize how many of those balls it takes to fill an adult-sized area. We had to scrap the idea because the total cost would have blown the entertainment budget for the year.

Out of curiosity; did you look exclusively at ball-pit balls; or are the ‘shade balls’ they make for reservoir cover also markedly more expensive than their deployment deployment in sometimes vast quantities would suggest?

We looked at ball pit balls only. Those reservoir shade balls are all black, which isn’t fun, and probably a lot bigger.