Romney: Trump caused "the vast heart of America to mourn"

too little too late mittens, so you can continue to just fuck off please.

Talk is cheap – especially since Mitt is out of the game.

I don’t judge Romney for trying to be SecState. He would have been better than that Tillerson incompetent, despite the inevitable tarring of his reputation for associating with the naked emperor. I saw it as him being willing to take one for team america. Apparently Clinton did too. 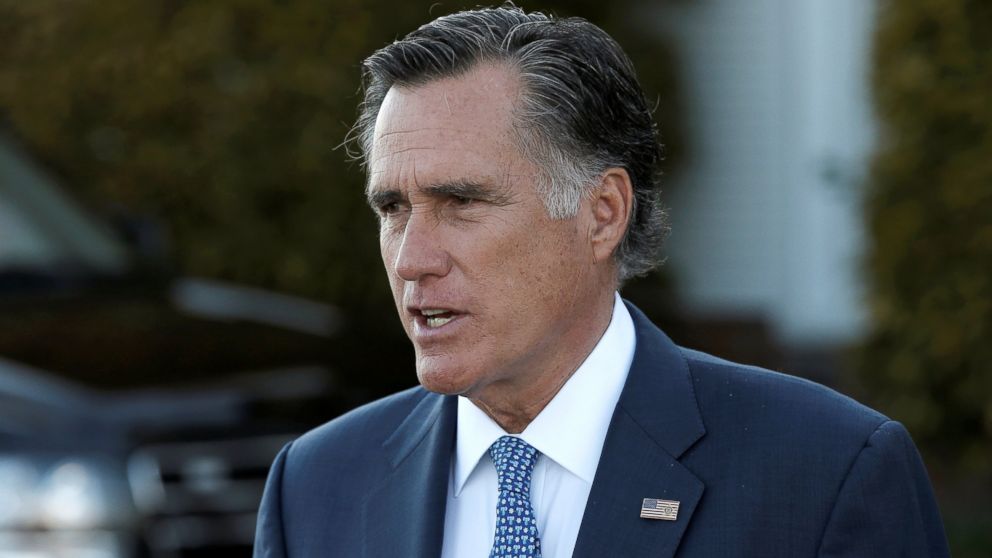 Hillary Clinton urged Mitt Romney to take the secretary of state job when the incoming Trump administration approached him about the role, Romney said on Friday, adding that he would have taken the position had it been offered. Speaking to attendees...

As for republican inaction, I think they won’t do jackshit until they get the ~80 federal judgeships that McTurtle obstructed. At that point, they will have wrung the very last drop of value from the incompetent-in-chief and will be happy to toss him to the wolves.

Republicans changed Senate rules to break a Democratic filibuster and confirm Neil Gorsuch to the U.S. Supreme Court, and blamed Democrats for necessitating the change along the way. Democrats, as you might imagine, saw it differently. In a...

“He should address the American people, acknowledge that he was wrong, apologize. State forcefully and unequivocally that racists are 100% to blame for the murder and violence in Charlottesville. Testify that there is no conceivable comparison or moral equivalency between the Nazis–who brutally murdered millions of Jews and who hundreds of thousands of Americans gave their lives to defeat–and the counter-protestors who were outraged to see fools parading the Nazi flag, Nazi armband and Nazi salute. And once and for all, he must definitively repudiate the support of David Duke and his ilk and call for every American to banish racists and haters from any and every association.”

Will someone explain how this is “remedial action in the extreme”? Seems rather 101 to me.

I’m an Independent, but not insane, so I’ve been voting Dem for decades. I wouldn’t worry about the great American experiment if Mittens were in the WH, same with Kasich. Bad but not catastrophic. Not apocalyptic. Hell I’d even welcome Dubya back and he was the worst president since Nixon (who could be argued to be an effective if corrupt and basically evil POS, note I said POS not POTUS). Arnie was a terrible governor, but not apocalyptic. Would welcome someone who could reach across the aisle, knock heads, kick ass and get stuff done for ALL Americans. Paging Jerry Brown…

Also F!CK these Nazis. Only good Nazi is a dead Nazi.

I’m not usually in favor of dogpiles, but when it comes to 45 I’ll make an exception; keep piling on, even if its just mere lip service from the likes of Mittens.

All this talk about repudiation. Do you want these people’s votes or not? If not, say you do not. That’s repudiation.

I think for Trump this bit would definitely qualify as ‘extreme’:

“He should address the American people, acknowledge that he was wrong, apologize.

Actually looking at it, I think Trump would have real trouble with each of those sentences.

The interesting bit for me in that post was this:

I will dispense for now from discussion of the moral character of the president’s Charlottesville statements.

“for now” potentially being the key words there.

Is this just the beginning of Willard’s revenge?

Trump will do the right thing …

I wouldn’t worry about the great American experiment if Mittens were in the WH, same with Kasich. Bad but not catastrophic. Not apocalyptic.

I agree completely. If Romney had won the presidency in 2016, I would have been unhappy and disappointed. But I wouldn’t be ashamed and embarrassed and fearful, like I am now.

Romney’s seems to be the strongest statement so far from a Republican. The thing that gets me - well, one of them - is that the (too few) Republicans making these statements aren’t mostly even saying, “I condemn this leopard eating faces, despite my previous efforts to support the face-eating-leopard,” they’ve been “I condemn the eating of faces on general principle (and I’m not calling out any specific leopards or leopard-sympathizers).” Even the first really doesn’t do much to make up for Romney’s (et al) previous support of Trump, knowing exactly what he was at the time, but the second is particularly gutless. Although I suppose we should be grateful that they’re at least rejecting the idea of normalizing face-eating. It’s a low bar, but…

Mittens, honey when you try to polish a turd all you get is smeared shit. Ir really isn’t a good look no matter how hard you try or how sincere you are. Shit is shit so it’s time to quit Mitt

Overall he’s still fantastically unpopular, of course, and there is a lag of at least several days between events occurring and their impact showing up in the polls (let alone in the poll-of-polls) but the trend over the past half-month has been quite positive from his POV.

How Mitt could really repudiate fascism:

Resign from the GOP in protest, condemn it as a fascist party, and call on all Americans of conscience to oppose it. Demand that the GOP legislators and laity do the same. Found a new, real Conservative party for them to join. Keep doing that as loudly as possible for as long as it takes.

I used to have a certain grudging respect for Republicans. But that was long, long ago. I now loath, despise and actively hate them. And I really don’t think I’m at all wrong.