now my childhood is ruined again (or something)

now my childhood is ruined again (or something)

Now people who were kids during WWII can get in on that action!

I love Kate McKinnon, but thought her mugging and other antics in Ghostbusters were a bit over the top (even for her). Of course, perhaps all that was in the script or at the behest of the director.

i thought that holzman did very little in the movie (as did most of the other characters). she just made faces and said random things. regarding her arsenal of “weapons”, they would just appear like, “i had tons of time to develop and produce dozens of ghost weapons while we were running around!”. this rosie the riveter mashup is creative and well done but falls about as flat as the movie it references.

It felt to me like there was more planned for the character, but not enough time to shoehorn it in.

The whole movie felt that way. Story beat after story beat where the score, acting, and framing is telling you “See, this is where all of that setup comes to a head” but there was no setup.

I love Kate McKinnon, but thought her mugging and other antics in Ghostbusters were a bit over the top (even for her). Of course, perhaps all that was in the script or at the behest of the director.

I disagree. I thought Jones delivered a respectably comedic performance, but McKinnon’s character was the only one I felt met its potential. Well, Hemsworth did a pretty good job, but only about half his jokes were funny. Those two though seemed most comfortable in the characters written for them. Which is fair, because they got better lines than the rest.

It felt to me like there was more planned for the character, but not enough time to shoehorn it in.

I got the impression they edited out a lot. There was a lot of jumpiness to the plot development that telegraphed a hyperactive editor to me.

Still solidly the second best Ghostbusters movie. I almost didn’t see it, not because of the manbaby brigade, but because the trailer managed to be considerably worse than the actual movie.

No, I don’t think so. I really enjoyed it. It was significantly better than most of the SF and superhero flicks we get this day in age. My guests and I all had a good time. The writing exceeded expectations. The performances were all above average for the genres (SF and comedy). The pacing was fairly even. The effects were a bit too CGI for my taste (I know it’s cheaper, but I’d like to see CGI houses doing more to recreate the ethereality of 80’s SFX, and not just in this movie but in all the digitally mastered stuff we get now). But I’m not going to dance around critiquing what I wasn’t thrilled with.

Studios should take note though, I haven’t been off to see Zack Snyder’s latest DC universe POS snoozefest. Six people (counting me) bought tickets to this Ghostbusters reboot (along with snacks) and I bought a round of drinks (Alamo Drafthouse) for my guests and myself. Our wallets didn’t damn with faint praise, and making movies cost money.

I bet she thanks you!

You’re confusing the poster “We Can Do It!”, an advert for Westinghouse during WW2, with the character Rosie the Riveter. It was not until the 1980s that the two were conflated. Even the Smithsonian shop sells Westinghouse posters labelled Rosie The Riveter. https://en.wikipedia.org/wiki/We_Can_Do_It! 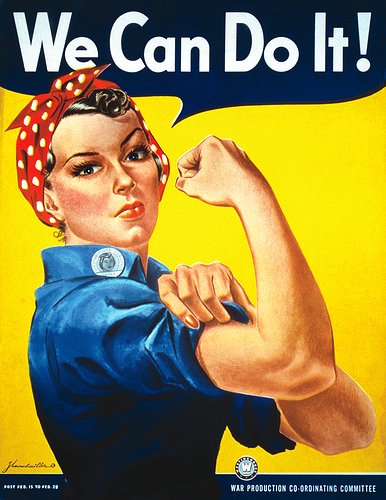 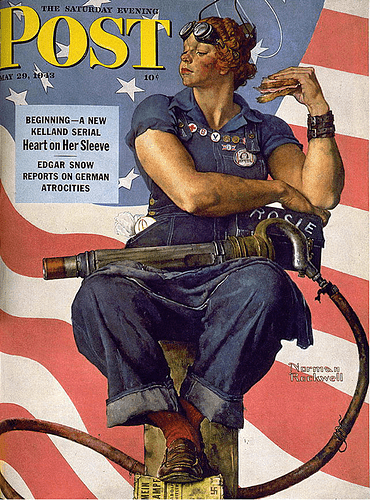 Aww, poor baby. Lots of other movies have all the men you want.

no, no, no… all movies that aren’t romances need to be starring men! Don’t know you that, silly wimmin!!! /s