Personally, their gender is not a concern to me. I just hope they are funny. Melissa McCarthy being cast doesn’t fill me with excitement, I have to admit. 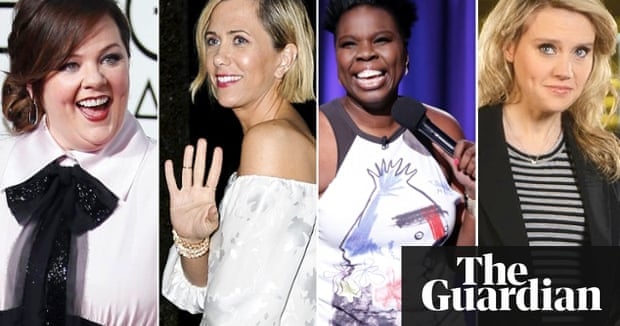 An all-female cast doesn’t bother me at all, but few remakes of beloved movies have been able to improve on the originals. At best they might hope to wow with modern special effects, and even that’s tricky for a film whose effects hold up surprisingly well 30 years later.

When I hear a director say “I love the first one so much I don’t want to do anything to ruin the memory of that” then my immediate reaction is "so why not sift through the gazillions of unproduced scripts out there and find an original one worth making?

Although I agree with you, Ghostbusters needn’t be a reboot/remake, this could very well be (and I hope it will be) a continuation of the franchise as it already exists.

this could very well be (and I hope it will be) a continuation of the franchise as it already exists.

Hope so. That’d be cool. I’ll watch it and I’ll probably enjoy it whatever. It won’t be as good as the first one because I’m not the same person now but that’s OK.

And I have been loving all the misogynist tears caused by the cast announcement.

McCarthy runs hot and cold, to me. I’ve really only seen her as host on SNL a few times, some of her stuff totally did make me laugh; some not. I couldn’t make it past a minute or two of Mike and Molly, but sitcoms are just generally wack, so that’s not exactly her fault. Wiig i love, and I think McKinnon is the best current SNL cast member without any doubt.

As I’ve probably already made obvious, I’ve actually been following SNL most episodes these past few years (I’m like a sports fan with them. You don’t not watch them just because the current squad isn’t as good as past squads. You learn to enjoy the minutia and occasional moments of greatness. which is another way of saying “Yes, I am aware SNL sucks now.”) This is preamble to explain my harshest criticism, which is for Leslie Jones: she simply has never made me laugh. I’d love to be proven wrong with her. Maybe she could shine given a long-form format? But, her SNL performances have been grating, IMO.

The all female thing seems like a welcome change over most of these stupid(er) hollywood re-boots. If it was a different cast, the all-female aspect might seem more gimmicky and prone to pandering, but my initial reaction is that they should be cooler than getting the formulaic male players found in Hot Tub Time Machine 2, This Is The End, etc.

That said, @Brainspore has made a great point. I’d be happy to see this one succeed in the sense of your idea of it being a continuation of the franchise, though.

tl;dr I’m probably only going to watch it on tv a year after it comes out anyhow, since that’s just kinda how I do these days, but I’m interested.

See I ONLY know of McCarthy, and I ONLY know her from her sitcom/bridesmaids stuff. SNL Isn’t on over here in UK land. The others I’ve never heard of.

I want to see a gender-swapped version of Dr. Who: A Time-travelling feminist, influential in creating genderswapped versions of::

Honestly, I don’t think I’m the target market for this at all. Really not a fan of remakes or reboots, would rather see something original.

Couldn’t care less about the all-female cast, don’t get the upset but I don’t like Melissa McCarthy in anything I’ve ever seen her in. I wouldn’t have been any more interested in a Seth Rogen/Jonah Hill/James Franco/Andy Samberg casting instead either, though. Old me probably wouldn’t have been interested in the original when that came out, to be honest. Don’t like a lot of comedies (certainly not broad ones - I loathed The Hangover, f’rinstance), and I very rarely like comedians/comic actors around my own age. Don’t watch SNL, haven’t liked very much of anything I’ve ever seen from it.

The only way I’d have been interested in a new Ghostbusters film would have been with the old cast doing a “one last hurrah” type thing, but that’s probably just a nostalgia thing, it would almost certainly have sucked - and all the ideas I heard from Ackroyd sounded terrible.

“I love females,” he added. “I hope that if they go that way at least they’ll be funny, and if they’re not funny at least hopefully it’ll be sexy. I love the idea of including women, I think that’s great.

I ONLY know her from her sitcom/bridesmaids stuf

Here’s Kate McKinnon in, IMHO, the funniest sketch in recent memory (the other woman, cast member Aidy Bryant, looks like a younger McCarthy, come to think of it)

the period mis-en-scene and the ridiculous Chicago accents really sell it, to me.

this one wouldn’t play in my country, so maybe it’s for y’all?

no luck with the other, unfortunately

this could very well be (and I hope it will be) a continuation of the franchise as it already exists.

Devoutly hope so. No need for a remake or reboot, but a West Coast chapter of Ghostbusters, set in Los Angeles, could make for a very different and potentially perfectly hilarious movie. Hell, even a road-show one would be swell, busting ghosts from Phoenix to Fargo. But I fear if they do another one set in New York, the temptation to make a straight remake will be irresistible, and then there will be practically no chance of success.

Honestly, I don’t think I’m the target market for this at all. Really not a fan of remakes or reboots, would rather see something original.

I am horrified at the idea of an Indiana Jones reboot.

Why can’t they just do F Troop and we can say the whole thing has jumped the shark.

I am horrified at the idea of an Indiana Jones reboot.

Not me. If it somehow ended up being good, I’d watch and enjoy it, even if they (mis)cast Chris Pratt in it.

To me, both Indiana Jones and Han Solo are on the verge of becoming characters like Sherlock Holmes, James Bond, or Superman. Just because they seem so perfectly defined by Harrison Ford’s performance doesn’t mean those characters have to die with him. I want more Indy stories, just as I want more Han Solo adventures, and a well-cast replacement with a well-written script would suit my needs just fine.

Because political correctness? No one will ever come close to Bill Murray’s classic performance.

Thanks future. Thanks a bunch. Reinvent things that were already awesome, but reinforce that we’re still obsessed by the gender divide by making it an all female cast.

I liked the idea of Indy and Marions son picking up the torch. Sadly Indiana Jones and the Search for Box Office Revenue drastically miscast the son. Give them a daughter. Not a reboot.

Some roles were so well played they need not be recreated. Could anyone else play Rick Blaine other than Bogart? Stroker Ace can only be Burt Reynolds.

Could anyone else play Rick Blaine other than Bogart?

I don’t like Melissa McCarthy in anything I’ve ever seen her in.