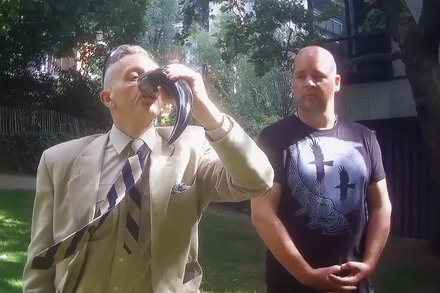 Opinion | Undercover With the Alt-Right

A Swedish graduate student infiltrated far right groups in the United States and Europe. This is what he saw.

“Once ze rockets go up, who cares where zey come down. Zat’s not my department…”

And yes, quite true, but those Nazis were also already high-profile and world-renowned scientists with a track record of delivering technological breakthroughs. NASA wasn’t hiring the guy with the equivalent of an associate’s degree in technical drafting who became the political officer at Peenemunde.

Ah yes, and it will always be the dumb nazi’s that are trying this, so we shouldn’t be worried.

If they were really on the ball and had the resources, they’d create an otherwise legit job placement agency to try to place their people, especially concentrating on placing them in HR departments where they could open the door.

(Things I learned from watching Scientology.)

Ah yes, and it will always be the dumb nazi’s that are trying this, so we shouldn’t be worried.

Quoting myself from earlier:

I’m saving my concern about fascists in tech for well-credentialled and well-connected people who are given real power, like the Google Misogynist and Peter Thiel and the legions of white Red-Pill and Randian tech bros who are already turning the industry’s culture into a cesspool.

But, hey, you keep worrying about white nationalist “I’m not a Nazi, but…” schmoes who walk around with swastika armbands and Hitlerjugend haircuts and who attend “super sekrit” meetings like this carrying out their infiltration plan of big tech companies.

There’s some value in tracing the phone lines for a menacing caller, but a shift of priorities is in order once it’s discovered the call is coming from inside the house.

a ceramicist who made a Hitler teapot.

Ah, a crackpot who does have a pot to piss in!

Yeah, it’s not like ‘hire a bunch of white dudes with awful politics’ is gonna particularly stand out in that millieu, odious as their plan and they are, it seems a little redundant.

Didn’t Germany ask for a lot of them back - to consult from inside their penal system?

Anyway, joke’s on those assholes. Ayn Rand beat them to it years ago.

Apparently Greg Johnson is paranoid about having his picture online. Oops!

Well that article is a depressing rabbit-hole of racist insanity. The one about the nazi teapot guy is especially unsettling… http://www.thestranger.com/seattle/charles-krafft-is-a-white-nationalist-who-believes-the-holocaust-is-a-deliberately-exaggerated-myth/Content?oid=15995245

Why do they even bother, tech is the most racist industry on the planet.

I suggest you read the article. There are some details in there that are really disheartening. This leather-clad armband-wearing goon is perhaps an outlier at this point, a lot of the serious Nazis are all undercover.

I wonder if any tech bros informed the photo shy anti-Semite of the Streissand Effect? Then, he probably heard the name and mistook it as a “globalist jewish conspiracy.”

I suggest you read the article.

I did read the article and quoted the relevant bit above. Those discussed in the article aren’t fascists with MIT or Stanford or Ivy League CS and MBA degrees and with the social capital to get management jobs – fascists who have those things don’t have to “infiltrate” the industry because they’ve been there for a decade or more.

I used the punched-Nazi photo for humourous effect, but the fact is that the people attending this meeting aren’t that different: young and weak-willed white males with so few prospects for moving up in our rigged late-stage capitalist society and with so little proper education and/or intelligence that the only worth they can see for themselves, thanks to charlatans peddling pseudo-scientific genetic “theories”, is the lack of melanin in their skin.

Johnson did take the opportunity to describe his strategy for “secret agent” white nationalists to infiltrate the tech sector by paying “lip service to diversity,” moving up the corporate ladder, and hire other mediocre white men who believe in racial superiority to fill the companies’ vacancies.

Wait, isn’t this how it already works?

Someone should ask him. 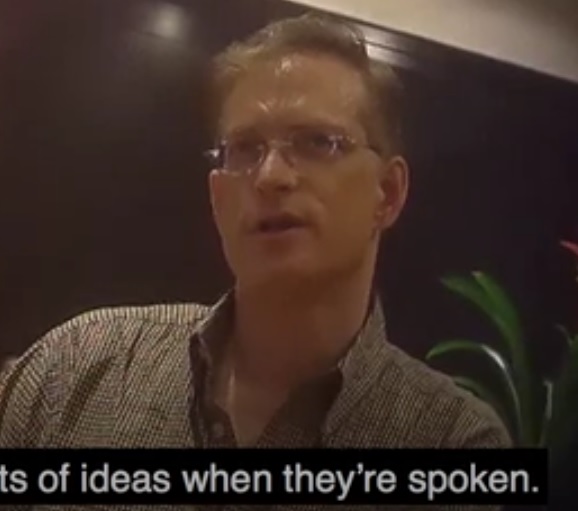 This gives a whole new meaning to the term “Bozo Event Horizon”. https://blogs.harvard.edu/waldo/2012/07/27/the-bozo-event-horizon/

It’s fun to point these guys out as idiots, but tech already has festering problems that slightly smarter versions of these guys can exploit. Some of it starts with grievances that have a bit of legitimacy. Say you bought into the “go to school, study CS, have great career forever” idea, but now overseas outsourcing is a threat to your career. It is very natural to look for someone to blame, and lots of folks settle on “foreigners took my job”. It is of course, much more complicated than that, but anger doesn’t like nuance. It is easy for that kind of sentiment to drift toward something like white nationalism.

If you want to feel bad, read the comments on a Slashdot article about outsourcing. It’s a hideous cartoon version of this shit.

That brown shirt he’s wearing, is that Hugo Boss…? This photo of neo-nazi Dr. Greg Johnson needs to be posted anywhere and everywhere so as to get an answer!