Sen. Josh Hawley doesn't know if a woman who had her uterus removed is still a woman

Originally published at: Sen. Josh Hawley doesn't know if a woman who had her uterus removed is still a woman | Boing Boing

Let’s see…is a senator with his brain (or soul) removed still a senator?

Often there’s not much, if anything, to remove. So … yes?

To Marjorie Taylor Greene, a woman is “Adam’s rib.”

Sorry ladies, if you didn’t literally get made from some dude’s rib, you’re not a “real” woman.

Which I guess means women don’t exist, according to Republicans. A (dis)belief which would actually explain a lot of things…

It gets tiresome that so many important topics that disproportionally affect society’s smallest, most vulnerable populations get reduced to inaccurate, elementary-school-level “facts” or “arguments” by craven assholes whose supporters seem to be nearly exclusively poorly-educated morons.

From EmptyG to Cawthorn to Hawley, it’s a spectrum of fascism.

I frequently think about how “simplified” grade school science (in particular, biology) has really led a lot of people astray - the problem being, they don’t realize that it’s been simplified to the point where it’s actually outright wrong. Everything about sexual development, about evolution (heck, the definition of “species” and what that means) are taught in ways that are wildly misleading and have direct impacts on daily life, and people think they know things that they’re basically totally ignorant about, to the detriment of, well, everyone.

From EmptyG to Cawthorn to Hawley, it’s a spectrum of fascism.

It’s a rainbow of fascist diversity, where every color is white!

Women need to have the GOP removed from their uteri.

is a senator with his brain (or soul) removed still a senator?

So much this. Huge numbers of people are walking around with bumper-sticker-level understandings of complicated, nuanced topics like evolution and sexuality. In the past that didn’t matter a whole lot. However now the world is in a place where we need people to understand things like this a lot better. Schools need to be teaching things like, “Evolution has thousands of confirming lines of evidence from completely different fields, ranging from physics to microbiology to paleontology”. Or things like, “Homosexuality exists throughout nature and likely has competitive advantages in a population as whole, so it isn’t surprising to see it in primates like us”. Or things like, “Gender is a spectrum that includes all sorts of biological variation, from various 2-3 chromosome combinations, to every blend of genitalia, to all sorts of hormone profiles”.

I know that the kind of ignorance on display here is not a lack of facts. It’s motivated reasoning to buttress a belief system. However for a lot of other people, information can help.

so many important topics… get reduced to inaccurate, elementary-school-level “facts”

They know the intellectual capacity of their audience.

Wow. There was a South Park episode way back in 2008 in which Mr Garrison (after transitioning from a trans woman back into a cisgender man) said almost the exact same thing in about the most offensive way possible. But it seems that no over-the-top, intentionally offensive thing that the writers of South Park come up with can exceed the real-world ignorance and cruelty of today’s GOP.

(Relevant portion is 1 minute into the video) 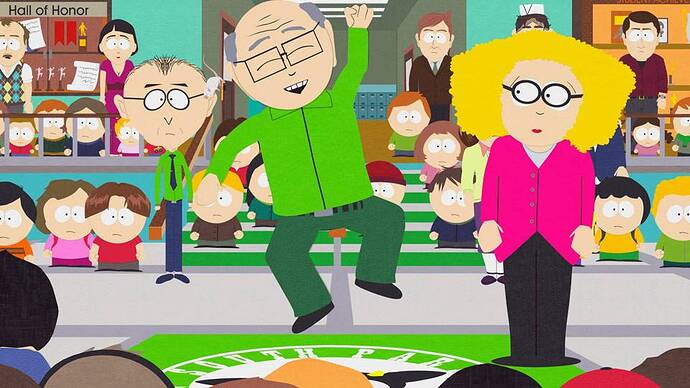 So…if my wife has a hysterectomy, does that make me gay? The ramifications are dizzying.

it became complicated for the Ivy league educated seditionist.

Hey, you can’t blame this one on the Ivies.

To be fair, this absolutely lines up with his contractual obligation to hate minorities.

True, but the Ivies have certainly lost a lot of their luster thanks to this goomba.

Unfortunately the uberbros behind South Park have some real blind spots. Many (maybe even most) social issues they get very right. Their piece on Scientology has to go down as one of the best adult cartoon episodes ever on any topic. They’ve done stuff that makes The Simpsons look tame and out of touch.

However trans issues are one of those blind spots. Every treatment of it that they have done has been beyond ignorant and offensive to the point of being harmful to a very vulnerable group of people. The bros see themselves as edgelords, but they don’t understand that they don’t get to decide where the edge is.