Sky censoring Ukrainian site, says it has "a white list of international media websites which are currently blocked"

I guess they don’t actually know what a white list is.

Yep, the UK is increasingly going the way of china…

My VPN subscription is looking more essential with every passing day 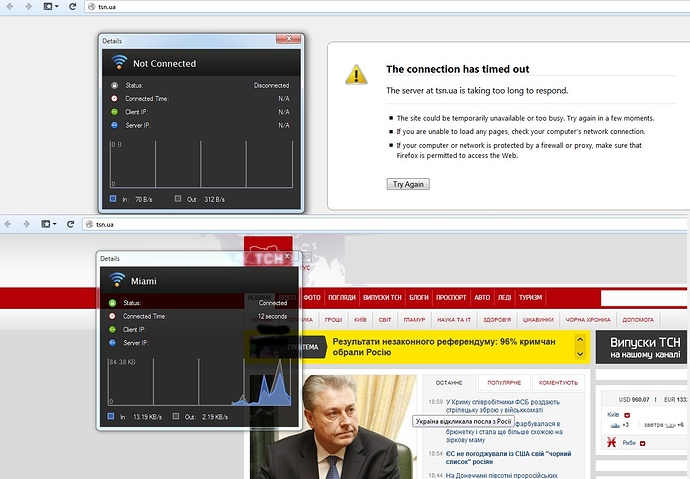 I don’t think we are going the way of china

I can get to it from work, so this is not a blanket filtering.

I’ll give it a go on Sky when I get home.

Even with censorship of news sites?

My question is: whose “whitelist” (sic) is Sky enforcing? Sky’s? David Cameron’s? Moscows?

tsn.ua times out for me too, ru.tsn.ua works fine though. I’m on a BT Wholesale wet string connection, which is resold by Talktalk business.

True, though it wouldn’t surprise me in the slightest if it’s intentional.

I don’t think this is a Sky problem. It is unreachable from all of my UK broadband line, my UK datacentre hosted server, and my Amsterdam hosted server. I tried a couple of those “is site x down” websites and they also claimed it was unreachable.

More likely they have some network issues and Sky’s support monkeys are incompetent.

Say what you want about the US, but I’m glad we don’t have a secret list of filtered websites. Once you cross the line of suppressing speech, propaganda becomes far too tempting for the state.

That secret list that nobody told you about you mean?

The US has a fair amount of censoring going on exactly like in the UK - just the content is different.

It would be interesting to compare where traceroute shows the packets disappearing.

I believe that RETN.net is a Russian company. Is it possible that the Russian government has ordered the traffic blocked rather than the UK government? Does Sky traffic to the Ukraine also go through RETN?

The US has a fair amount of censoring going on exactly like in the UK - just the content is different.

Oh, I don’t know about that.

Being a US citizen there is plenty about the country that I’m not too happy about right now – couldn’t begin to even count, really – but freedom of the press is something that fortunately (and a bit surprisingly, really) it still relatively healthy.

Not sure where you’re from, but the US has constitutionally guaranteed press freedom (unlike a lot of modern democracies, such as Australia), and compared to a lot of our other rights – which are on life support, at best – it’s doing fairly well.

Freedom of speech by country

Freedom of speech is the concept of the inherent human right to voice one's opinion publicly without fear of censorship or punishment. "Speech" is not limited to public speaking and is generally taken to include other forms of expression. The right is preserved in the United Nations Universal Declaration of Human Rights and is granted formal recognition by the laws of most nations. Nonetheless the degree to which the right is upheld in practice varies greatly from one nation to another. In many n...

The link works here in Canada (Cogeco is my ISP.)

You are correct. The blocking (assuming it actually is blocking, not just a SNAFU) is taking place within Russia, and it turns out that the route taken by LINX to get to Ukraine goes via Russia, but the route taken from many (most?) other countries does not.

In other words, this article is pretty much entirely wrong. As is Sky’s helldesk, but that’s not exactly news.