What in the heck are 4.4 lbs of cocaine? pounds?

Someone needs to get clued that coke is sold in this thing called the Metric System. With the exception of 8-balls (8 for 1/8th of an ounce, designated 3.5g), you buy coke by gram or if you’re doing well by the key.

Stupid police that have never done the drugs they’re in battle with or whatever.

As for the pumpkins, that was a good idea but *who takes pumpkins on an airplane!" That’s what got these morons busted. Not only are they odd, they’re fruit&vegetable so could be inspected or rejected by a state or country to ward pests and whatever.

Are you off your head? Never done the drugs they’re in battle in?

But Officer, this is just Halloween nose candy! Think of the children!

was is bound for Toronto?

The traveler was a gourmond? It’s so seasonal and yet it won’t put weight on, like the lattes or pies. She’s a Martha Stewart in the making.

Well the Canadian media at least knows about kilograms. 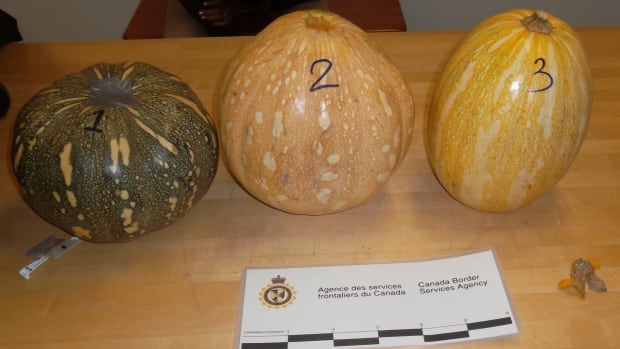 That said, they do sometimes get pretty ridiculous when they have to report about something in the US - the 362.873896 kg gorilla in the room…