So the Alt-Right is coming to your campus

Do they have tips on how to make sure that the Block Bloc types attend your joyful protest? (And pass on a Punch-A-Nazi opportunity.)

“UF has a policy that “non-university groups, organizations and persons may rent space on campus, provided they cover rental expenses and security costs like all other third-party renters” — and the content of a group’s platform may not be considered.”

Does UF have a garbage dump available?

curious if an actual civil debate with these alt-right types would be a better way of dealing with them? i recall in my youth seeing nazi’s and white power skinheads on talk shows (like donahue/geraldo, etc.) and when having to debate and defend their beliefs, it just made them seem like idiots. i understand not wanting to give them platforms, but maybe giving them a platform then completely destroying their ideology in full view of the masses would make people who do think like them reconsider their beliefs?

So we had friends over last night and we were discussing Charlottesville. One of the points I made was that as abhorrent as the viewpoints the Alt-right group(s) espoused at their “rally” may be, I simply don’t think it was wise to show up in “protest” of their “rally”. The counter argument is of course “evil triumphs when good men do nothing”. And there is absolute truth and wisdom in saying “we can’t just let them do it without them know we think they are wrong”.

I think this article/stance summarizes what I was thinking…do the counter-rally/protest, just not near them. They are known for violence and disgusting behavior. Just stay away from them entirely.

My only hope is that colleges and universities begin to deny them access under whatever legal grounds/measures they can. Hate speech is not Freedom of speech.

I think 20 years ago this was a good idea…a man can’t hang himself unless you give him enough rope. Allow their own stupidity to be their undoing.

The issue today is I think this was what people thought about Trump when he was on the campaign trail. “Sure, let him debate…he’s an idiot” How did that work out? He said stupid, idiotic things. He spoke like a a middle schooler in debates with the GOP candidates and with Clinton…and yet, he still became POTUS.

A nice bit of counter protest to the Charlottesville rally would have been a black, a Muslim, a Jew and a white person, mixed genders, coming out and setting up a table right in front of them, sitting down, pouring some tea and eating cake quietly.

That said, the videos of them ganged around the statue chanting with their tiki torches made me so angry, I fantasized about people showing up with large red gasoline jugs, just standing around being threatening (even if they had water in them, the message would be clear.) But even that empty threat is wrong, it plays into their attempts at being victims and demonizing anyone who disagrees with them. And legally it may be no better than pointing an unloaded gun at someone.

There is really no satisfying answer to this kind of thing. You can’t guarantee that holding a big popular event elsewhere will do the trick, you can’t show up to counter protest without it turning into a spectacle.

When someone like Spencer or Yiannapoulos comes to speak, don’t protest, instead do the research and come ready to ask difficult questions, pin them down and make them defend everything hateful they say.

i recall in my youth seeing nazi’s and white power skinheads on talk shows (like donahue/geraldo, etc.) and when having to debate and defend their beliefs, it just made them seem like idiots.

Didn’t one of them clock Geraldo in the face with a chair?

I watched one of the US presidential debates on Youtube, and when it was over the broadcasters were singing high praise of Trump, and explaining how Hilary had lost. I had to check the channel after that, and sure enough it was Fox. There almost needs to be a method for objective scorekeeping, where the factual statements/fictional statements relating to the question are added up and posted on a big scoreboard behind the debaters. I’m sure that wouldn’t solve all the problems with it, but maybe a step in the right direction. Who am I kidding though? They don’t care about facts.

When someone like Spencer or Yiannapoulos comes to speak, don’t protest, instead do the research and come ready to ask difficult questions, pin them down and make them defend everything hateful they say.

And make sure that it goes up on social media quickly and without selective editing, because the next day there will be a video on YouTube: “Watch MILO destroy fascist SJW snowflake!”

ok so not very civil. haha 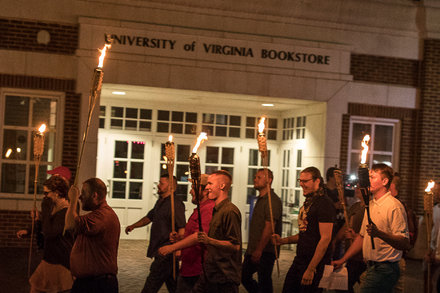 Opinion | Why the Nazis Came to Charlottesville

And why I was wrong not to confront them.

Hate speech is not Freedom of speech.

"This is not about “free speech.” It never was. There is no “free speech” if anyone brandishes firearms to intimidate those they despise. You can’t argue with the armed. The Nazis told us their intentions clearly on Saturday. This, to them, is about “blood and soil.” -Siva Vaidhyanathan

No argument from me…that is exactly what I am saying too.

Alt-Reich. It’s Alt-Reich, make no mistake. And no, I won’t tolerate people who would gladly, proudly murder me, or any of my friends or family. Fuck that.

Alt-Reich is great. Let’s please not use alt-right.

It sickens me that once again, the right has managed to get just about everyone to adopt their terminology.

Do they have tips on how to make sure that the Block Bloc types attend your joyful protest?

Assuming they aren’t the anarkiddie types who don’t know anything about anarchist theory, you could ask them to do talks and workshops on decentralised organising, socialism on a local scale, that kind of thing.

curious if an actual civil debate with these alt-right types would be a better way of dealing with them?

The SPGB in the UK used to do them, but I don’t see any in the last 50 years (Ukip would have to be worked out on an individual member basis). I don’t think they had much effect to be honest. What actually worked over here was showing the far right to be the violent people that they really are. It worked with the BUF in the 1930s and the NF in the 1970s and 80s.

Debates between the Socialist Party of Great Britain and other groups were of particular importance in bringing the party case to an outside audience without the sometimes off-putting rhetoric of platform speaking, or the one-sidedness of educational talks. A prime instance of this importance for the party is the case of Richard Headicar, a former Campaign for Nuclear Disarmament speaker, won over after debating with the party. Of rather wider historical importance were the debates with the Revol...

We forgot the world is full of people who are impressed when someone tells them what they want to hear. Maybe those people are idiots too, but it’s a scary thought that some 30-40% of registered voters are idiots.

you think the percentage is that low?!?