Soldier destroys Humvees with the power of gravity

I worked for the VA for awhile, my takeaway: our military is almost entirely comprised of angry, violent, half-witts. That said, the Army guys did seem to be especially dumb.

our military is almost entirely comprised of angry, violent, half-witts.

My brother was in the navy for 9 years or so? My dad and I did a “Tiger Cruise” once, and I heard a lot of stories.

A lot of it is the fact that it’s all people who are living out their adolescent years among heavy machinery and firearms while the rest of the country is going to rather good parties and concerts and such.

It’s also why my brother got a lot of shit jobs because of his unblemished service record.

So the crews were okay because the airbags, right? /s

I think its agreed by all the services that Marines are bringing up the rear as far as smarts go. MARINE = Muscles Are Required, Intelligence Not Expected. Of course they would maintain that ARMY = Ain’t Really Marines Yet.

Mind you, this is coming from the guy who when he enlisted thought that there was just “the Army”, without regard to the various branches that make up the armed services. So there’s that.

Oh yeah, the jokes the branches make about each other. Love 'em.

Told by the Navy:
“Why do you have to be 6 foot tall to be in the coast guard?”
“So if your boat sinks, you can walk back to shore.”

Air force referred to as, “The Chair Force”

“You have no respect for excessive authority or obsolete traditions. You’re dangerous and depraved, and you ought to be taken outside and shot!”

Instead, Sgt. Skipper was demoted to Private, and dismissed from the Army. Not dishonorably discharged; instead, almost politely asked to leave, and to never come back. Which was better than what he’d hoped for: he didn’t anticipate becoming part of Brigade lore without spending at least some time in jail. Instead, he’d said what he had to say, and now had a bus ticket home. When he got there, he thought he’d try his hand at selling cars.

In its very own way that was beautiful.

I wish I could release the gif I made of a similar situation.

I was photographing an MRAP (larger than a Humvee) airdrop at Fort Campbell. It was a proof of concept, but failure was expected - just not as spectacularily as it actually was. There were four parachutes, one on each corner. Halfway down one of the corners dipped, then its parachute failed, and then the other chutes failed.
The dust plume was fairly gigantic, and the poor MRAP was about ten feet into the ground, with the front end sticking up.
I had about a 60-shot burst of photos, that I made into a gif for the investigating officer. I really miss that gif now.

“As God is my witness, I thought Hummers could fly…”

Dammit, I was too late. 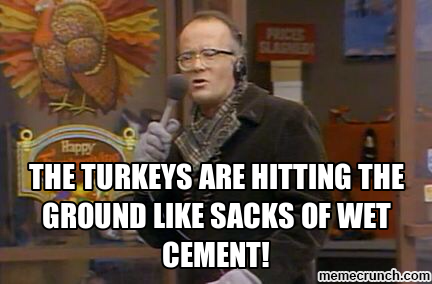 I believe these are KEWs?

This man should be rewarded as a hero for destroying US military equipment. The world needs fewer expensive killing machines, particularly American ones.

He maybe could have gotten away with it if he had just left it at ONE.

The NPR article seems to indicate that the demotion and discharge were only part of the discipline.

A sergeant first class heard laughing and cursing on a video of the Humvees falling from the sky was punished previously. The sergeant, an observer trainer coach assigned to the 7th ATC’s Joint Multinational Readiness Center, was given an administrative letter of reprimand.

The video of the incident has been viewed more than 1.4 million times on YouTube. 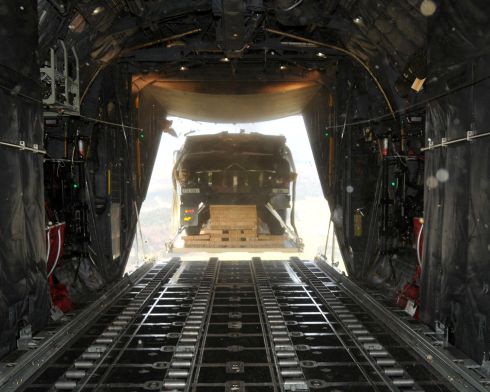 Sgt. John Skipper, 29, was found guilty at court martial in Vilseck, Germany, of destroying military property and giving a false official statement, according to a statement from the 7th Army Training Command, based in Grafenwoehr.

I wonder if he would find an invoice from everyone whose effective US tax rate was greater than zero during the applicable time period to be as amusing.

The amount per person would be rather small; but it’d be a great deal of paperwork for him.

How did it do? It was my understanding that, in their “if you can’t stop being a sitting duck; up-armor the duck” role, MRAPs were intended to remain intact(though by no means necessarily leave the scene under their own power or be economically repairable) in the face of pretty massive blasts.

Any crumpling or disintegration of the body; or just a respectable hole and plenty of damage to everything that isn’t the armor shell?

i thought it was My Ass Rides In Navy Equipment?

Dammit, I was too late.

I share your pain. Gotta be quick on the draw in these here parts.

Gotta be quick on the draw in these here parts.

He was found guilty in court martial of destruction of government property in excess of $500. I think, but am not sure, that that is a felony conviction. Also, he got a bad conduct discharge. Both of those are very bad news for future employment, housing, insurance, loans, etc. He probably can’t vote, own a firearm, or qualify for VA benefits, either. This guy has screwed himself utterly for lulz. He didn’t even have a chance of getting away with it.