I really have to wonder what would get a majority of voters in Georgia’s 14th district to realise what an unhinged idiot and ignoramus she is. I’m assuming she got elected in 2020 because a lot of them were just voting for the person with an “R” after her name, but if she’s re-elected in 2022 it will really say something about the electorate there.

Oh, good grief.
We have enough idiots over this side of the pond, but she’s taking the biscuit.

I’d like to add “people are voting for this nonsense?” but, hey, Tories.

How can those in the audience a) be induced to even walk into the room to listen to her unhinged ranting, and b) sit there for the whole time while she blathers what would be a sarcastic comedy routine from anyone doing standup these days? 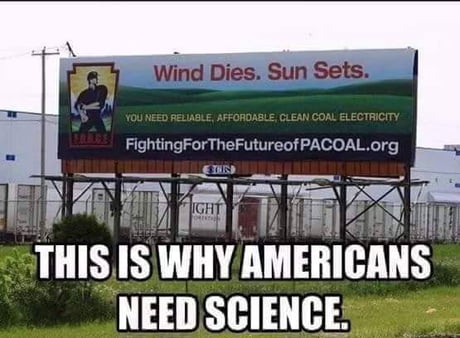 Yea.
These types of arguments are always put out there as if they make any sense at all.
Yes, we all know that if the sun isn’t shining or the wind isn’t blowing that those sources of power will be “offline”.
But guess what - my panels power my house throughout the year almost entirely during the day - and my excess goes back into the grid (which is almost all the time) providing clean power for others.
On a personal note - my electric bill for the YEAR is about 200 bucks thanks to net metering.
Oh, and then this happened - 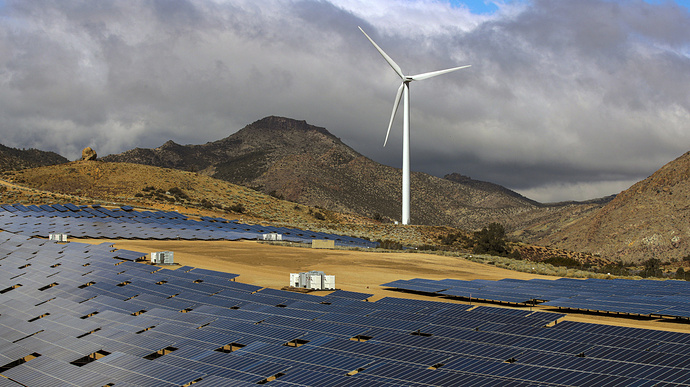 California broke its record for renewable energy when solar and wind provided enough to meet all consumer demand. At the time, natural gas power plants were still on, a necessity for the grid.

I would rather see more articles about “my dog diarrhea’d in my mouth while I slept” selfies than this ignorant dipstick. And that says a lot.

The final authority on all aspects of twisted hot air.

If these asses didn’t hate science so much, I’m sure their position would be to send a manned mission to the sun in order to mine solar power at night, when it’s not so hot.

That, and the Dem opponent pulling out of the race at the last minute. Not sure that his staying in would have done anything - her district has been reliably and solidly red since it was created.

if she’s re-elected in 2022 it will really say something about the electorate there.

Especially given that her opponent is a pretty conservative Democrat with outstanding bona fides. But he’s black and her constituents are nothing if not racist. I’m hoping, but it will be closer than it ought to be.

I would rather see more articles about “my dog diarrhea’d in my mouth while I slept” selfies than this ignorant dipstick. And that says a lot.

I’m familiar with the “why not both?” meme, but in this case, we need a “why not neither?”

No one’s ever considered the availability of wind power before. That’s Nobel Prize level work, Marge. You should quit and join the private sector in energy. It’s a waste to stay in politics.

Wikipedia says windmills have been in regular usage since at least the ninth century. There are no signs we’ve run out of wind.

Is this from her new stand up routine? I don’t make it into ChristoFascist clubs so am not familiar with their décor.

Some days the wind doesn’t blow and the sun doesn’t shine. That’s why you burn this noxious black stuff instead, which doesn’t ever have the slightest of problems with its availability.

Wind power is killing all the birds?

Suddenly they’re all passionate about wildlife

Wikipedia says windmills have been in regular usage since at least the ninth century. There are no signs we’ve run out of wind.

There was a nice piece in The Guardian about her district - essentially you could paint a cabbage red down there and it would get elected on the Republican ticket (and do a better job than MTG): 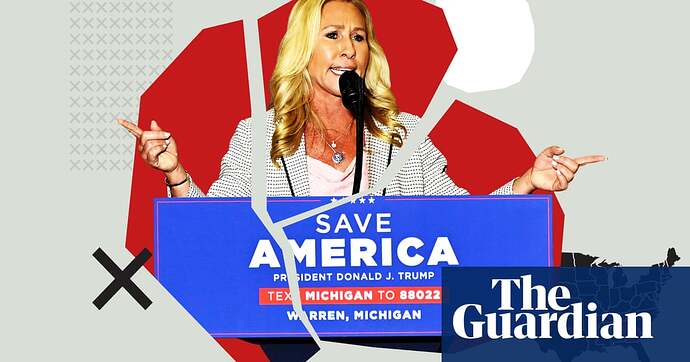 Georgia in focus: A Democratic challenger who raised $10.8m is facing an uphill battle against the Maga congresswoman

I think she just doesn’t understand the concept of energy storage because her brain doesn’t store anything either.