Comes from past experience with those assholes. When they won’t help, they write a letter.

The Dems don’t need to be obstructive when McConnell is doing it for them already.

The libertarians don’t want anyone picking up the pieces after they’ve drowned the government in a bathtub. 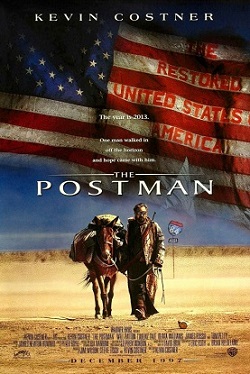 I know there are a number of smaller towns in rural west Texas that only have PO Box service. According to the UPSP link below, 1.3 million Americans do not receive any form of carrier delivery.

Translation: Your — and Trump’s — actions can be interpreted as being criminal. Noting the number of House Dem signatures appended herein (that serving as a gentle reminder that the Dems may take both Houses of Congress in November), and that even in the unlikely re-election of Trump, a Dem Congress can and will impeach him and remove him from power… in which case you would lose his protection and be open to criminal prosecution whether or not you are in office.

so the other 58 House Dems are just fine with it?

Woah woah there. That isn’t strongly worded. They’re saving that up for when things get really bad.

That letter is a serious slap on the wrist. The Postmaster is probably worried that it might go on his permanent record, or that Congress might punish his agency by cutting his budget.

Citizens to Nancy - hearings! Get it on TV every day. Keep demanding more hearings. It will pressure Trump and it will distract from further damage to our bleeding postal service.

Can’t they just arrest de Joy for tampering with the US mail? Please!

You have to hold the senate to obstruct. The House can’t do much of anything on that score. Getting the house was important from a “we’re going to block shitty laws you try to pass,” but does nothing to prevent the administration from putting in place people like the asshole running the Post Office now.

What I’d LOVE to see them do - and they won’t - is declare his actions in contempt of Congress and jail the prick. But the GOP would scream bloody murder and shake their little fists, and the Dems would fold like a table cloth. Dems never could stomach using all the powers at their disposal to ensure a functioning democracy.

Vote. Drag people to the polls if you have to. Commit to ensuring at least four other people you know go vote this shit heel out of office, taking with him these blights on our country.

Trump has zero aversion to corruption, he’s gotten away with previous corruption. If they’re willing to blatantly and shamelessly bork the postal system for profit and electoral gain, then I can’t see any reason why they won’t also rig the upcoming election outright. Just inject fake votes through the Postmaster General. Dictators still have elections, they just fake the results. I may be wrong, but I worry that democracy may be ending in the US.

That would be incredibly risky. Unless the postmaster general stuffs the ballot boxes himself there need to be hundreds of people involved. People who work for the USPS and are already disgruntled with his policies. At least one of them would talk. And since this is pretty much the most illegal thing you can do in a democracy even the dissembling from the GOP-friendly press would not be able to keep them out of life in prison. Much too big a risk to take if you can just use the old Republican standbys of voter suppression, propaganda, character assassination, court cases before politicised courts, etc.

I hear you, really hope that’s the case. I worry that finding hundreds of true believers to collaborate may not be so hard in this era. I worry that someone revealing faked votes would just turn into another Tuesday, just another blatant corruption to throw on the pile. Fingers crossed, please vote people.

The Post Office has plenty of tools at their beck and call if they want him to back off the changes. First, they can intentionally slow down mail delivery even further, then let their customers know its the changes at the top causing the problem. The more checks that are delayed, the more medicines held up, the more the GOP will come under pressure to reign this bastard in.

Second, they could strike. Illegal? Sure. But that never stopped them before, and there’s no backup to the post office for delivery, no strike breakers who can step in and do the work in every little town in America. The last time the government tried using the national guard, and that failed spectacularly. So threaten to strike if they don’t undo the changes by a set date. You’re a union for a reason, use your union powers.

The power of change has always come from below, not above, from the masses, not the wealthy elite. Congress can’t do squat, it’ll have to be the USPS and/or the people protesting that will cause them to back down.

hidden somehow in the middle of New Jersey

The fact that this letter, as weak as it is, was only supported by Democrats is also a big problem. This should not in any way be a partisan issue.

It is a very partisan issue because thePostmaster General is ripping automated sorting machines out of sorting offices almost guaranteeing that many election postal ballots will be delayed -many beyond the deadline for submission for votes to count. Trumpty-Dumpty has made it clear to his base that they must not vote postally. The net effect they are aiming for is not hard to figure out.

Unless the postmaster general stuffs the ballot boxes himself there need to be hundreds of people involved.

No, not hundreds of people.
Just the ripping out of the automated mail sorting machines. Takes one man - the PG - to order it, that’s all.

The Post Office has plenty of tools at their beck and call if they want him to back off the changes. First, they can intentionally slow down mail delivery even further, then let their customers know its the changes at the top causing the problem.

I’m going to keep repeating this until people get it. This is not just more of the same recent USPS starvation of funds and management fuckwittery to gut it as a public service. THEY ARE AS OF NOW RIPPING OUT AUTOMATED SORTING MACHINES. This is overt sabotage not just of the USPS but of an election that could hinge on postal ballots. 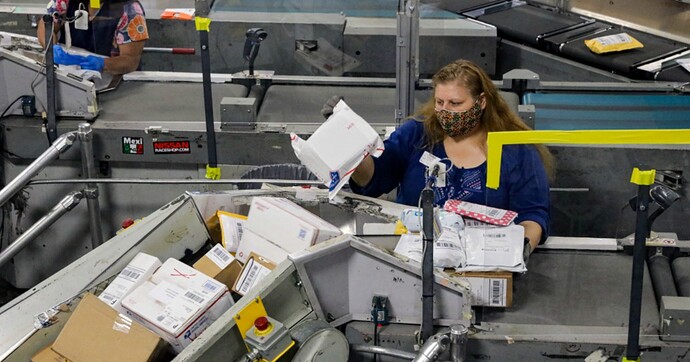 'A Conspiracy to Steal the Election, Folks': Alarms Sound After Postal Worker...

The removal of key equipment from Post Offices should be viewed as nothing less than "sabotage," said one observer.

The head of the Iowa Postal Workers Union alleged Tuesday that mail sorting machines are “being removed” from Post Offices in her state due to new policies imposed by Postmaster General Louis DeJoy, a major GOP donor to President Donald Trump whose operational changes have resulted in dramatic mail slowdowns across the nation.

Asked by NPR 's Noel King whether she has felt the impact of DeJoy’s changes, Iowa Postal Workers Union President Kimberly Karol—a 30-year Postal Service veteran—answered in the affirmative, saying “mail is beginning to pile up in our offices, and we’re seeing equipment being removed.”

Karol went on to specify that “equipment that we use to process mail for delivery”—including sorting machines—is being removed from Postal Service facilities in Iowa as DeJoy rushes ahead with policies that, according to critics, are sabotaging the Postal Service’s day-to-day operations less than 90 days before an election that could hinge on mail-in ballots.

Bang your knockers,
Ring your bell,
I am great
'Cuz I am swell

These lines are clearly from a more innocent age.

No, not hundreds of people.
Just the ripping out of the automated mail sorting machines. Takes one man - the PG - to order it, that’s all.

You misunderstood. I was replying to someone saying they would stuff the postal ballot with fake votes. My answer to that was that would be risky and involve hundreds of people when the easier way would be to use other means to delay and stop genuine postal votes, such as … ripping out automatic sorters I suppose.

No. I understood you and was also emphasising that there was no need for hundreds of people. Sorry if the way I phrased it seemed like I was criticising your comment - maybe I should have also referred to @gipetch’s comment in replying to you.

But the word needs to be spread - they are TODAY ripping out machinery without which it will be almost certain that many postal votes risk not getting counted.

(I said I was gonna keep saying it.)

Out of context, that sounds incredibly creepy (or kinky depending on your preferences - no judgments here)