Yeah, I’ve honestly never seen it except at weddings, it’s a bigger tradition in Yemen. I have one, incidentally. My father bought me one out of novelty.

In Gulf countries, business dress consists of a quality single color kandoura/thawb/dishdasha (the robes you typically see men wear) and a ghatra (the turban) and igal the circular black band that holds it on. On the news you’ll often see people like the King of Saudi Arabia wearing a black overrobe with gold trim. You tend to only see clerics and royalty wear that habitually. Though you’ll also see it on people at special ocassions, especially older men.

In the Levant and places like Iraq, people largely wear western style clothing, though people wouldn’t bat an eye at more traditional dress.

I just thought I’d throw it out there since you seemed interested.

I just thought I’d throw it out there since you seemed interested.

I’ve read that the Saudi religious police don’t wear an igal over their ghatra, because they think only God is entitled to wear a crown.

I feel lucky to have gone to Oman and would love to go back, though I’m not sure if/when that would happen. I also visited Dubai, but given a choice (and the opportunity) I would go back to Oman. (ETA: In the winter.) Both of those trips were in 2012; actually they were business trips for my previous employer (which then imploded).

In all likelihood, any opportunity for me to go on a 13-to-16 hour airplane trip will be to visit Ethiopia, where my wife is from. I’ve been there twice, once for our wedding and once when our kids were little. It’s been 6 years since that last visit…

EDIT: Just to (sort of) bring this back on topic, I had a co-worker who went to Japan on vacation. Before he left he arranged to buy some kind of Japanese sword or saber. I think he spent a couple grand. Presumably it did not come back as carry-on luggage…

Is that actually a scimitar, though?

Although, as was stated earlier, the one in question looked to be a very poorly made stamped steel version. It still did the trick, though.

How do you sharpen it?

Can you use it to cut garlic?

An ex of mine had family living in Oman for many years and from their accounts they loved living there. They were in the process of potentially moving somewhere else after having been there for a decade or two and were sad about it. Been curious about Oman since, seems like quite a nice place to visit

My dad had good things to say about Indonesia as well when he went on assignment years ago. He didn’t entirely care for India.

Heh, I guess I am, under the English definition of expert. I know guys with far more expertise, though.

Mass-produced machetes are usually sold dull as butter knives, and immediately sharpened by the end user, so you can never know what the edge profile will look like. I’ve seen them with chisel edges… hand made ones usually have a full tapered edge all the way to the spine. As somebody pointed out, they are still usable weapons without sharpening, but since the machete is primarily a brush-clearing tool it’s usually sharpened.

The ethnic groups that favor machetes for weapons are descended from peoples who relied on them as tools, generally speaking; using them extensively as a tool means you develop high skill, which compensates for their weaknesses as weapons.

Scimitars come in endless variety. Straight swords are nearly always balanced to optimize thrusting, so the balance point is usually around a hand’s width from the guard in a one-handed, straight, pointed sword. But curved blades and square-tipped swords are optimized for slashing, so it’s not uncommon for them to be purposely tip-heavy to deliver a more powerful slash. The ancient Romans actually modified their standard military equipment significantly after fighting against opponents armed with tip-heavy khopeshes, which were capable of breaching Roman helmets and shields with terrifying ease.

Some Arab peoples carry strongly curved daggers as tribal identifiers; it’s ethnic. The curve keeps the knife from slipping out of a cloth sash. Baptized Sikhs carry superficially similar knives; it’s religion. School districts that restrict weapons are discriminatory towards Sikhs, obviously, but compromises have been worked out where baptised students can carry ceremonial knives that have the blades riveted into the sheaths.

Did I miss anyhing?

Did I miss anyhing?

I’ve seen some sources claim that they were intended for reaching around shields, but nothing reliable. Opinion?

you seem to have misspelled “knoife”

this was bugging me. tip of the cap, sir.

Depends on the curve of the weapon, if it curves toward the opponent then for the most part it is to defeat shields or blocking.

Certain curved weapons like the scimitar are intended for closer use to the opponent so you don’t use them one handed, you use them with your free hand on the spine of the sword and you keep the blade close to your body. But for the most part they are used with the intention of maximizing chopping and slashing. Also if you’re on horseback you can more easily decapitate someone without having to actually swing the sword, you just hold it straight and the curve of the blade does all the work for you.

Just to (sort of) bring this back on topic, I had a co-worker who went to Japan on vacation. Before he left he arranged to buy some kind of Japanese sword or saber. I think he spent a couple grand. Presumably it did not come back as carry-on luggage…

Sikh carry a Kirpan, and they are far from ceremonial.

It can depend on the circumstances. If they are going somewhere that would have a problem with them carrying a blade, they might have a small kirpan that is sewn into their clothes and is secure. When I was working at Carlisle United we were told not to worry about Sikhs carrying kirpans, a skinhead carrying the Guardian was far more likely to be a problem.

Not that we had many Sikhs at Brunton Park. If Carlisle United fans got any whiter the away fans would get snow blindness.

I have limited experience with curved swords, although I have practiced saber thrusts from horseback (because there’s a posture & wrist trick to stabbing with a curved blade while passing your target that’s fun to learn).

But the way you use a curved sword, generally, is with hacking and cyclic slashing actions. To get around a shield using the curve, you’d have to thrust. Thrusting a curved blade is tricky, as mentioned, and usually slow, and it’s hard to focus force in an arc rather than a straight line.

The best weapons I’m aware of for reaching around shields are picks and flails. (Picks can also puncture shields better than most weapons.) Both are weapons biased more towards offense than defense, especially the pick which tends to get stuck in enemies.

I’ve read that the Saudi religious police don’t wear an igal over their ghatra, because they think only God is entitled to wear a crown.

Possible. This kind of overenthusiastic display of religiosity sounds about par for the course. How a utilitarian thing that keeps you ghatra on your head is a “crown” is beyond me.

I had a co-worker who went to Japan on vacation. Before he left he arranged to buy some kind of Japanese sword or saber. I think he spent a couple grand.

A Hattori Hanzo is not sold. It is earned.

Why am I reminded of old Looney Tunes?

My Schwartz is bigger than your Schwartz! 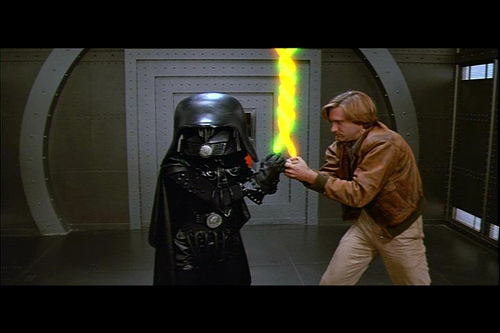 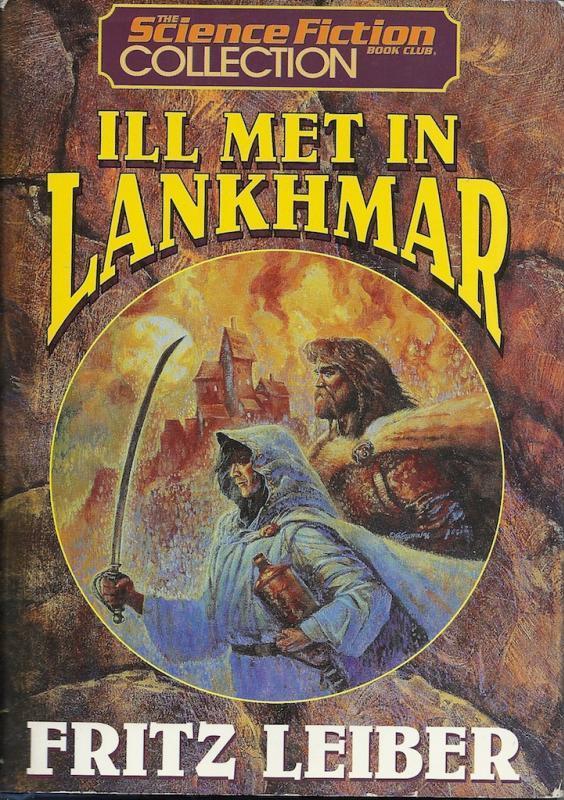 Although after that the two became great friends.

A lot of people here have machetes; at first they were for cane field work, but then use broadened and many landscapers use them for cutting and trimming. When the palm tree trimmers go aloft to trim back the palm fronds and nuts, a machete is a common tool, although I usually see them using one that has a more triangular blade, with a small hook at the back: