The Church Of Mammon 👿

I’ve sarcastically commented previously that “Mammonite” is my personal nickname for the American “Christians” who loudly proclaim their status as Christians, but don’t actually fulfill any of the deeds and actions that a Christian is supposed to follow–charity, kindness to strangers, mutual acceptance, visiting the sick, respecting civil authority, brotherhood, benefit of the doubt, and silly little things like that, but instead seem to believe that their faith demands that they oppress the weak and poor, fear the stranger, display bravado and hate instead of patience and understanding, act with greed and avarice, and care not for how they have sinned against their fellow man, for they have cheap grace that absolves them from their misdeeds.

Expanding on that and asking only half-sarcastically, I have to say: that’s a hell (pun intended) of a new Covenant. So I’m starting this thread for sarcastic (or not…) analysis on the Church Of Mammon, which, by my estimates, is either the third or fourth largest faith in the United States.

14 Likes
Charleston shooter Dylann Roof found guilty in racist 2015 massacre of 9 black church members
Trump protected from attack by Satan
Generic 2016 US Election Cycle Recycling Bin
In the chaos of the Muslim ban, the rule of man trumps the rule of law
Waitress receives tip: God wants you to go home and cook
Why are Republicans happy with a guy who wants to "turn on the hate" and destroy them?
chgoliz September 14, 2016, 12:08am #2

I’ve noticed every time you’ve mentioned it on this forum, because that’s how I’ve referred to them for years. Well, I say they “worship Mammon” rather than using the noun Mammonite, but same difference.

I think the source of their beliefs is older and more primitive than any of the known formal religions: it is fear that pulls them inward to a self-preservation form of basic survival instead of recognizing that those around them are not threats but rather the way to survive BETTER and even thrive.

Green’s discussion of the usage of PGmc *hailigaz seems relevant:

I think the choice of “holy” over “wih” in English-speaking Christianity is itself a symptom of the problem. It’s etymologically related to hail and health, and of course to Nazi slogans. Of course all branches developed some degree of the problem, but Gothic and High German Christianities don’t have that symptom.

I suppose this might come off like those who want to replace hello with heaven-o. Which is absurd. I would rather revive fagino, but … not yet.

Ayn Rand was a prophet in the cult of Mammon. Her texts, The Fountainhead and Atlas Shrugged, are a modern component of their mythology and her Objectivism is an element of their theology. They were founded long before mankind invented written language, when darkness entered vulnerable hearts and they devoted themselves to lifelessness, which they elevated above all living spirits except perhaps their own individual selves.

They believe profit is an absolute virtue regardless of its means, and they believe that it pleases and earns the favor of their god when they unfairly take or steal away in part or whole the wealth and prosperity of others through direct or indirect means. They prefer to evangelize with showy affluence and the pretense that their god has elevated them some measure above mankind. Their most prominent members (some of which are undying daemonic entities built of fused and corrupted souls, otherwise known as for-profit corporations) tend to be those individuals or entities who garner (as above) Mammon’s favor in great volume, those who proselytize loudest, or those who successfully influence public policy to promote the civilization-corroding proclivities of their dark selfish god.

Who are their leaders?

I know that replying to one’s self is a bit poor form, but, really, is there any doubt, given that seven out of eight Evangelicals voted for Trump, that he is the implicit leader of the Church of Mammon?

Interesting thread. I’ve been thinking about the values of the people who elected Trump a lot in the past few days (more so, I mean, than in the last few months). Something you hit upon here has been at the top of my mind:

They believe profit is an absolute virtue regardless of its means, and they believe that it pleases and earns the favor of their god when they unfairly take or steal away in part or whole the wealth and prosperity of others through direct or indirect means.

I’ve been thinking about how, on some of the issues I feel demand a moral compass from all of us as a society in order to address (think Crisis of the Commons), they put profit above all else. But on issues that are far more personal and don’t do us as a society any damage if we just let the individuals or couples involved come to their own conclusions about right and wrong (e.g., reproductive rights, gay marriage), these Mammonites rely on completely virtue/morality based arguments.

I’m interested to hear if any of you have any thoughts on their logic…if logic is the right term.

There are some interesting differences between Evangelicals in the US and UK. It’s not that there aren’t also similarities (especially more recently), but US fundies always seemed way more right wing than the ones I knew closer to home. UK Evangelicals and other nonconformists (including Quakers and Unitarians) have historically had quite a large presence in the left wing. In the 19th century they were often members of the Liberal Party and were instrumental in the early Labour Party (apparently it adopted more of the nonconformist spirit than its policies, but the contribution was still significant). The first editor of the New Statesman was the son of a Congregational minister (later Unitarian) and claims to have learned a lot about passive resistance from nonconformists. Prison reform was pioneered by people like John Howard (a Calvinist) and Elizabeth Fry (a Quaker). This is an account of my g. g. g. grandparents, once removed (Mr. and Mrs. W. S. Aldis): 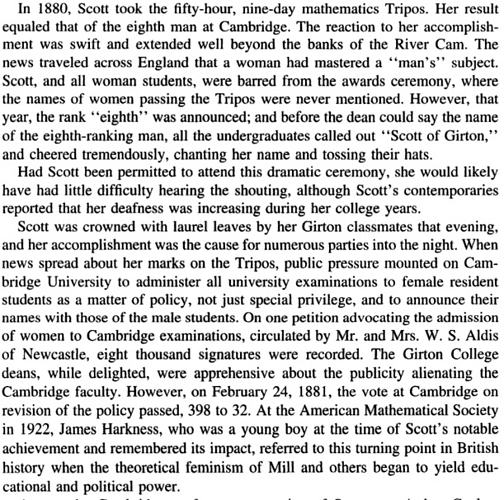 Apparently there was a later petition, but by all accounts they were the first to petition for a change. W. S. Aldis won the Tripos (mathematics test) in his year, and was one of two Baptists and a Jew (who was a close friend of the family) whose success led to the abolishing of the religious tests in Cambridge and Oxford. They were both the children of Baptist ministers, and his mother was described as highly intellectual. They combined surnames when they got married, and he supported her scientific study (astronomy). When I was told about my roots as a Baptist by my parents, the implication was that good Christians were also active SJWs (albeit within a particular religious framework).

Obviously along with this there were a lot of less progressive or overly moralistic elements (W. S. Aldis ended up being dismissed from an academic post because of his outspoken and uncompromising social and moral positions, particularly on drinking), but I would say that this legacy has coloured the more historically-minded UK Evangelicals. I got the impression that while many didn’t approve of the more liberal theology, Unitarians and Quakers were seen more as ideological cousins, particularly from a social perspective. I’m not sure whether that translated into a lasting relationship though; I suspect not. It’s interesting to see how particular sects interact with their world, especially when they are in the position of an underprivileged minority in a country compared to a large and politically powerful group in a country that adopted key nonconformist positions like separation of church and state. I suppose in America, Evangelicals had no nonconformist connection with other minority religious groups like Unitarians and Quakers, since there’s no established church.