The coming conservative "civil war" is going to be weird

Where’s Michael Morore when we need him to do a documentary about Trump’s lack of qualifications. We can call it Fareinheight 2000: The Temperatture that sanity burns (also the temperature of Orange colored flame)

So does this mean we can expect a fully realized T. Cotton campaign to emerge from the American fever dream, nukes in hand and calling for an end to the “dirty” people taking American jobs/benefits?

Wouldn’t it be great if we could watch the breakup of the Republican Party with the expectation that the remaining pieces/groups would actually try to found policies and practices that would help every American, and not just the male-est, white-est, xtian-y dudes chuckling about grabbing pussies and the like?

That’s the thing: when conservatives come around to the right position, they invariably do so for heinous / deranged reasons.
“I now recognize that randomly attacking people with a staple gun is wrong – a nail gun would be far more effective.”

Even David Brooks is offering strong criticism, albeit mediated by human sympathy.

There are a lot of people I agree with only with the greatest reluctance, but the past couple of weeks have definitely set a new record. Brooks? Krauthammer? Glenn Beck?! 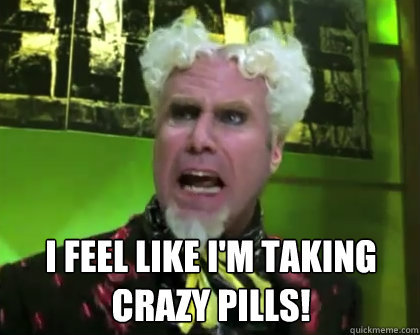 The coming conservative “civil war” is going to be weird

weird? More like the crazy circus is in town.

Where’s Michael Morore when we need him to do a documentary about Trump’s lack of qualifications.

As of a week or so ago, good ol’ Michael Moore was still declaring that Hillary Clinton was going to lose the election. He’s not very in touch with the political climate these days.

Is he really? I think Hillary Clinton will win this, but very narrowly and not nearly as decisively as she should. I don’t think a prediction of a Trump victory is off-base.

It just may say something about our times that I assumed that the “civil war” in the headline referred to the predictions of what was going to happen if Hillary won by diehard Trump supporters. As opposed to the GOP working itself into a coffin corner of appeasing white racists to the point where they can not win a national election.

I put more stock in Nate Silver and his staff than in Michael Moore, who also predicted a decisive Mitt Romney victory. Then again, maybe Moore is just trying to keep people from getting complacent?

It’s true. Conservatives don’t give a shit about abuse or even rape unless it costs them votes. Todd Aiken proved that. The kind of scary part is they can’t imagine anybody else cares either. They think Liberals are just better at pretending to care.

A couple weeks ago, Silver had this at 60/40 Clinton, but it’s usually been about 80/20 Clinton. A Trump victory isn’t out of the question at all, but I don’t think it will happen.

I think a lot of the pro-Clinton rhetoric is designed to scare people into voting for Clinton, but I don’t know if that’s what Michael Moore is doing. He’s really his own thing. He’s more of a gadfly. IMO he can’t really convince anyone of anything, but can get people talking.

I think any non-Trumpster still predicting a Trump victory is trying to scare Democrats (and especially die-hard Sanders supporters) into getting off their asses and voting for Clinton. Especially after this weekend, a big Clinton landslide looks like such a sure thing that people could get complacent and stay home, or cast protest votes in meaningful numbers. (Though protest votes for the Libertarians will probably come mostly from disgruntled Republicans.)

The popular vote maybe, but Trump has lost basically every battleground state without something crazy happening in the next couple of weeks.

it’s naive to think Republicans care about sexual assault on any level other than its consequences for the horse race.

when conservatives come around to the right position, they invariably do so for heinous / deranged reasons.

. Conservatives don’t give a shit about abuse or even rape unless it costs them votes.

Othering is a process that goes beyond ‘mere’ scapegoating and denigration – it denies the Other those defining characteristics of the ‘Same’, reason, dignity, love, pride, heroism, nobility, and ultimately any entitlement to human rights. Whether the Other is a racial or a religious group, a gender group, a sexual minority or a nation, it is made rife for exploitation, oppression and indeed genocide by denying its essential humanity, because, as the philosopher Richard Rorty put it, “everything turns on who counts as a fellow human being, as a rational agent in the only relevant sense – the sense in which rational agency is synonymous with membership of our moral community” (Rorty, 1993, p. 124).

At this point, I think that it’s all about the downballot elections. The goal is maximizing Democratic turnout and getting Republicans to stay home in disgust.

That, and only that, was enough to arrest the endless forward movement of a party happy to glide on racism, religious discrimination, misogyny and xenophobia – profitably and seemingly forever.

Changing demographics was bound to force them to rethink the blatant racism sooner or later. We are approaching the day when it will be mathematically impossible to win a national election without significant support from non-white voters. (Sooner the better IMO)

a big Clinton landslide looks like such a sure thing

Edit: of course, depends on what you consider a “landslide,” too!

what else do christian soldiers go onward towards? 72 virgins??