I’m retired military. The rules expressly state to not treat the flag itself as clothing or marketing. So I’m a bit prickly to that. Hate seeing it tattered on trucks or as someone’s underwear.

From this post and others like it elsewhere, it would seem that British soldiers have the same relaxed attitude to the national flag as that expressed by @GyroMagician (and, in my experience, by British people generally).

Fuck with the regimental colours, though, and you’re taking your teeth home in your hat.

It’s funny, I don’t really get the strength of feeling. It’s just a flag.

Ah, that explains it. Not a Murican. We’re taught from the crib that the flag is sacred. Maybe even holy!

Is kneeling really the right symbol to use when confronting this problem? Kneeling is subservient. I would much prefer the “Standing Power Fist” as a way of saying “stand up” or “resist” or whatever the exact message is that kneeling is supposed to send. I get why it was done initially, but it just seems like the wrong message at the wrong time.

It could even be interpreted as kneeling before your master, Emperor Trump. The more Trump protests the more people kneel - playing right into his hands!? Stand up for your rights!

It could even be interpreted as kneeling before your master, Emperor Trump. The more Trump protests the more people kneel - playing right into his hands!? Stand up for your rights!

Could it be interpreted that way? No one is interpreting it that way. Are we worried about parallel universes or something?

Is there any fact-checking service that the right wing considers valid? Facts are their enemy!

The pinnacle of patriotism. I wish I was surprised.

The insincerity of your question is deafening.

The insincerity of your question is deafening.

After a while, can JAQing off become deafening to the point of muting? Jus’ askin’!

I need to know for a friend.

Do they blink? They are worthless unless they also blink with your blinkers, too.

That’s nothing, you should see the skid marks he left on his American flag underwear! 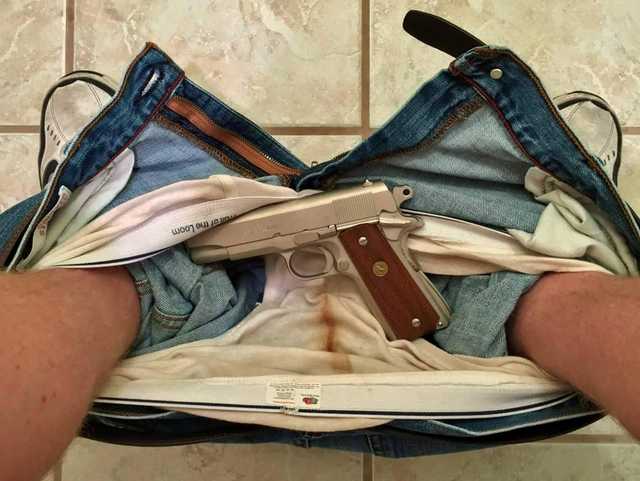 I don’t care how many zombies or aliens or wolves are chasing us, I’m not going to borrow that gun.

That photo might even disqualify it from a police buy-back program.

Ach! That needs a blur. Disgusting (in more ways than one).

Edit: thanks for the blur!

That section you quote seems to be valid only in Washington, DC

Yeah, I think you’re right about the legal penalties described in that section. Similar language occurs further down the USC (ie, use in merchandising, apparel, etc.), but doesn’t seem to carry the penalty. I guess that’s because DC is a federal zone there are special restrictions.

Maybe our flag means something slightly different because it represents years of oppression by a divinely chosen monarch? Or maybe we Brits are just more laid back?

I did like the “wouldn’t it be polite to show some upset” line in the linked piece. Sometimes I miss my countryfolk.

Maybe our flag means something slightly different because it represents years of oppression by a divinely chosen monarch?

I think you’re on to something here. The Stars and Stripes, like the French Tricolore, is held to represent the people (the nation, in its old sense) and their fight for freedom. The Union Jack, on the other hand, is (I believe) still technically the Queen’s personal heraldic badge, rather than a national flag per se. (A heraldic badge was a device traditionally used to identify a great nobleman’s followers and possessions, the coat of arms being reserved for the nobleman himself.)

There’s probably also a sense that the Union Jack is a bit of a hodge-podge, a not terribly elegant compromise: Wales isn’t on there, but Ireland still is, represented by a flag that I don’t think anyone in Ireland has ever actually flown.

The flags of the individual home countries do seem to attract more popular sentiment. I have a feeling that if a bunch of English burned a saltire in front of a bunch of Scots, there’d be a good chance of a ruckus, especially in the wake of an England/Scotland football match.