HiLux represent! I’m not sure you can’t drive them out along the bottom of the river.

I always thought that the Liberty ships were only the welded steel ones. I knew the USS Eldridge was able to time travel but I didn’t know the concrete ships were considered Liberty ships as well. Thanks for the facts!

Not the most sought-after MTV Video Music Award.

Was that guys shirt stuck in the door or something? Let the fuck go!

Let’s just pull the curtain here, lest we pun ish our fellow Happy Mutants too harshly

Hey, this topic is about sinking ferries, and you all are making puns about window treatments!

THERE IS NO CAPS-SIZE BIG ENOUGH FOR MY DISAPPROVAL

Not the most sought-after MTV Video Music Award.

It would have done even worse in the “Most Successful Bryan Ferry” category. 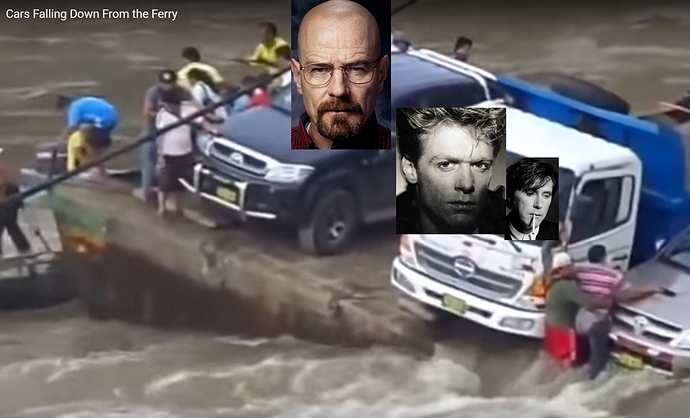 There was a good long-read article on this tragedy in the Atlantic Monthly ten years ago:

One of the worst maritime disasters in European history took place a decade ago. It remains very much in the public eye. On a stormy night on the Baltic Sea, more than 850 people lost their lives when a luxurious ferry sank below the waves. From a...

And they had no excuse - the Herald of Free Enterprise* sank in 1987 for exactly the same reason. “Only” 193 people died. I believe a number of deaths were caused by cuts from broken glass. You would think, wouldn’t you, that interlocks would prevent engagement of the main engines if the ro-ro doors were not fully closed? Or at least that there would be a really big blinkenlight in the engine control room?
But you would also think that the valves that cap oil wells would have some indication of which way is which, as they must be assembled right side up. And I was told, when on a safety course in 1990, that as of then they did not.

*Surely a candidate for the most ironic name ever given to a ship. HMS Invincible might seem to have been inviting the attentions of the kindly ones in much the same way, but in fact when it did ground in the Solent everybody was saved.

At least it wasn’t made of Pykrete.

The ship sank in 1994 in the Baltic Sea in one of the worst maritime disasters of the 20th century… costing 852 lives.

MS Herald of Free Enterprise was a roll-on/roll-off (RORO) ferry which capsized moments after leaving the Belgian port of Zeebrugge on the night of 6 March 1987, killing 193 passengers and crew. The modern 8-deck car and passenger ferry, owned by Townsend Thoresen, had been designed for rapid loading and unloading on the competitive cross-channel route, and there were no watertight compartments. When the ship left harbour with its bow-door open, the sea immediately flooded the decks, and within m...

what is the pickup guy thinking. he wouldn’t let go of his truck when it was sinking even when he was close to the boat.

Despite the fact that it’s obviously a water-based community there, my sense was that the guy didn’t know how to swim.

And the Eastland disaster, which at 844 was the largest loss of life from a single shipwreck on the Great Lakes. The ship was actually at the dock, loading passengers.

I was watching for it, but the guy with the pickup truck did not come back up, and did not get picked up as far as I can tell.

Which makes this an awful video, not a wonderful video. I wondered why he didn’t let go of the truck, but maybe he was unable to swim and terrified.

At least it wasn’t made of Pykrete

Pykrete does have one advantage over concrete boats - it isn’t porous. Reinforced concrete is very prone to leaks, and the steel reinforcement then gets damp with the expected results. Selling a concrete boat is very difficult because what marine surveyor would want to make a categoric statement on its likely long term seaworthiness? It’s one of those things that looked like a really good idea but turned out to be less than real-world practical - like Pykrete.

I think while you were composing that, I already posted. But the story is worth telling twice.

THERE IS NO CAPS-SIZE BIG ENOUGH FOR MY DISAPPROVAL

I was hoping he would learn to climb.

I agree. I don’t think that man came back up. If that’s the case then we just watched a snuff flick so bb could make a really lame joke about “worst ferry of all time”? Man, if you live there, and you gotta cross, it’s the ONLY ferry…

I thought they didn’t get him out either at first, but I’m pretty sure they pick him out at 2:30.

You think it’s funny he may have drowned? You understand this really happened, right?