The Lincoln Project defends Dr. Fauci: "Who do you trust? Donald the dope, or the doctor?"

It is beyond amazing that there is still a cult that will worship Trump no matter what idiotic thing he says or does. He is certainly a talented showman and conman.

Glad to see this. Hope to see a lot more of the same. The actions (and inaction) of this administration during a pandemic should be more than enough to turn most of 45’s base against him.

The actions (and inaction) of this administration during a pandemic should be more than enough to turn most of 45’s base against him.

Its not. Go talk to them. Most people have a few in their circle. They have consigned themselves to whatever reality trump declares, and is propagated by a large number of bloggers and mouthpieces often with their own agendas. And they won’t believe a word you say, because obviously you’ve been indoctrinated by the mainstream Fake News, and they think no doubt you are as devoted to what they think you’ve been fed, because why would you think for yourself when they don’t.

I’d love to have a silver bullet to expose this fallacy to them, but my experience is they ignore any inconvenient fact, and take up trumps style of denial. I think a wholesale destruction of the GOP and Tea Party, trump going to jail - basically the destruction of their reality may be the only thing that might help.

He is certainly a talented showman and conman.

The rumor is 45 is addicted to media, I wonder if he watches this? I would think not. He can’t control the message so he would probably deflect and ignore. There was a Lincoln Project video he did watch because he rage tweeted about it as I recall.

They do buy ad time on Fox shows the Donald is known to watch, so he probably sees them. He doesn’t seem like the type to DVR everything and fast-forward through the ads.

His support is falling. By November, it should be low enough to help get rid of him. He’s pissed off seniors ever since the nursing home disasters, he’s pissing off parents with the plan he’s pushing for schools in September, he’s pissed off the unemployed because those checks of his aren’t enough with the economy in a downward spiral, and he’s pissed off small business owners by letting entities that had no business getting federal relief funds take the lion’s share.

The worse things look for the country, the less he’s able to hide his main concern (himself) from his die-hard fans. I think some of the face-saving talk his fans love to do to “own” others, press their buttons, and make themselves feel better is just that - talk.

President Trump’s approval rating hit a record low of 45 percent among likely voters in six battleground states, according to a CNBC-Change Research 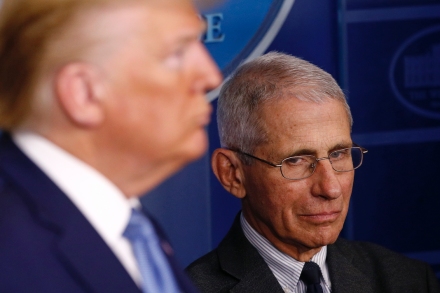 The Dangers of Blind Faith in Scientists             We have a major problem. Is it wildfires? No. How about coronavirus? Closer, but not quit…

The only thing that will make Trump’s followers reconsider things would be for them to catch COVID-19 and face the consequences. 1. They catch it and think “maybe I should have worn a mask.” 2. Symptoms get worse and they think “maybe I should have taken better care of my body and ingested wholesome food instead of Mountain Dew, pork rinds and hot dogs.” 3. They spend several days in the hospital and think “I can’t afford these bills. Maybe I shouldn’t have been opposed to universal healthcare.” Case in point:

gotfuckingdammit. That was painful to read. The pretzel logic arguing the semantics of “truth, to be truth must be absolute…” so the very nature of science to improve as new discoveries and evidence is applied to the previously held thought or theory, therefore, cannot be ‘truth’. Specious and disingenuous at best, but to apply that to Fauci and the early statements that by nature of the ongoing discoveries in the nature of this NOVEL virus that would evolve as the crises unfolds, is cheap and furthers the RW agenda of discrediting experts while offering NO alternate solution to apply to ‘discovering’ any remedy to a world-wide disaster. The argument that “science can’t be truth, because it cannot be absolute” is false and dangerous. Using silly semantic arguments to push an obvious hachet job on the one epidemiologist that has been brave enough to take on the orange goon in the same room is bad faith and, IMO, the author is well aware of that fact

The only thing that will make Trump’s followers reconsider things would be for them to catch COVID-19 and face the consequences.

One of my daughter’s friends’ parents is a Trumper who just lost his father to Covid-19.

He still thinks it’s a hoax and raised a stink about having to wear PPE to visit his dying father at the hospital.

For the true cultists, death itself is not a powerful enough force to shake their faith in Trump.

Symptoms get worse and they think “maybe I should have taken better care of my body and ingested wholesome food instead of Mountain Dew, pork rinds and hot dogs.”

I’m not a Trump supporter, but this is definitely me. Well Dr. Pepper not Mt Dew…and, well, it is now Diet Pepper because the doctor said so (like a real Dr, not Dr Pepper). Still, pork rinds? Sign me up! Hot dogs? Great! Hey, can I get Frys with that?

If it takes him down sure, i’m all for these ads, but the enemy of my enemy is not necessarily my friend?

We need to have a serious talk about the Lincoln Project. This is a bunch of Repubs, trying to wash the stink off themselves by running these ads that are geared toward one viewer only. Yes, they stand against #45, but their game is to position themselves after the election as acceptable, serious, reputable political commenters, whose opinions are to be respected, aired and printed. What do they stand for that is so different from the Repubs’ current talking points? Is the only difference that they don’t believe the q conspiracy theories? Some of the staff’s views have already been exposed as racist. We were shocked that Sanders dignified Joe Rogan with an appearance on his show., and now we are in awe of these ads. Best to take a step back and consider what is the point and intent.

The point is to get people who maybe have never voted for a Democrat in their lives to vote for Biden this time. Will this suddenly mean everyone will “agree” with these voters or people involved in The Lincoln Project later down the road? Of course not.

And Sanders was smart going on Rogan, because his interview was fantastic and exposed a lot of moderate or libertarian type voters to the real Sanders, vs the 5 sec video quips and memes. His positions were explained a lot better and seemed way more reasonable in long form interview.

so the very nature of science to improve as new discoveries and evidence is applied to the previously held thought or theory, therefore, cannot be ‘truth’

The fact that this is actually what separates science from religion, the requirement that our beliefs change based on new information, is completely lost on those that eschew science (except of course when that science benefits them somehow). It not a bug, it’s a feature. I would also say that anything considered “absolute truth” is probably closer to religion than science. But if I said that to a science denier, they’d just take it as proof that they are right, rather than raising an eybrow at the absoluteness of it.