God, I’d give my eyeteeth to live in the horrific dystopian “nanny state” that people who throw around the phrase “nanny state” always seem to think is about to run rampant on us.

(The nanny state would pay for implants or bridges to replace my missing eyeteeth anyway.)

Why not a picture of tubgirll?

California pools must post a dizzying array of warnings, the best of which is “Persons having currently active diarrhea or who have had active diarrhea within the previous 14 days shall not be allowed to enter the pool water.” Turns out there was a messy fight behind the now-ubiquitous nanny-state signage.

AFAIK this was an attempt to try and reduce the spread of norovirus through pools. I’d say about a sixth to a quarter of apartment complex pools in the area are salt water and not chlorinated around here, which if someone recently had noro, they would spread their infection with the pool; and not everyone puts the two and two together that either they shouldn’t go into a public pool if they are sick. Sometimes noro can be a mild enough case that the person who has it doesn’t even realize they are sick; they may just think that they ate something that had a mild disagreement with them.

Now, these may reduce the spread of noro and other butt-borne diseases a bit; but what would be much better is to chlorinate the pools properly. But with the way California politics play out that’s much harder to legislate than putting up a warning sign (which is better than nothing, tbh) (they could also make the signs a lot less terrible; UI/UX, PEOPLE!).

This is the tip of the stupid sign iceberg in California. They are everywhere. Every hotel or office building has a sign warning of evil carcinogens lurking inside. Every jetway has a sign warning you of damage to your perfect pink lungs by jet exhaust. Every place that sells coffee has a sign about some chemical that is in basically everything that is roasted. Every new car has a non-removable decal on the drivers side window warning that “new car smell” causes cancer.

Spend some time in California and you get really good at rolling your eyes at or outright ignoring such signs. If you took these signs seriously you wouldn’t be able to leave the house.

Aaaah, good ol’ prop 65. Adding to the sign blindness of the world. So Prop 65 is a good idea, warn people when they are about to enter a hazardous situation. The trouble is the law ignores reality. They legally mandated the test behind it, which is flawed and doesn’t work for the application and pops false positives everywhere. (even the inventor of the test says so). The law completely ignores both dose response and sequestration; so if the substance needs to be ingested to cause harm but is sealed away from ever being ingested is totally ignored. Also I wouldn’t consider the substances on the prop 65 list to be known to cause cancer or birth defects; a lot of them might, or may have had a study suggesting, but very very few will actually cause it. If I had more time and energy I’d start a new prop to fix it, but fuck it, I don’t have the time or energy to do it.

I have fructose malabsorption. I have never gone 14 days without diarrhea.

Phlegmatic diarrhea is the worst.

The CDC explanation below is very convincing. What are the odds enough people who need to understand this information and act properly will ever do so? Ick, way too low. I’m sure not having a problem with a sign reminding them about it. If they don’t already understand about cleanliness and safe habits, what are the odds the sign will fill the gap? Low, but non-zero.

What am I going to do, never swim in a public pool again? Not without looking at it dubiously and making damn sure not to open my mouth. And it’s not like this is the only biohazard I’m going to run into in public. Wipe down the armrest and tray table, elbow-bump instead of handshake, etc., etc., etc., etc., etc.

Diarrhea and swimming don’t mix! Diarrhea is the most common recreational water illness (RWI). Swimmers who are sick with diarrhea—or who have been sick in the last two weeks—risk contaminating pool water with germs. Certain germs that cause diarrhea can live from minutes to days in pools, even if the pool is well-maintained. Once the pool has been contaminated, all it takes is for someone to swallow a small amount of pool water to become infected.

Infectious diarrhea can contain anywhere from hundreds of millions to one billion germs per bowel movement. Swallowing even a small amount of water that has been contaminated with these germs can make you sick. Tiny amounts of fecal matter are rinsed off all swimmers’ bottoms as they swim through the water. That is why it is so important to stay out of the pool if you are sick with diarrhea, shower before swimming, and avoid swallowing pool water.

At public swimming facilities, continuous filtration and disinfection of water should reduce the risk of spreading germs. However, swimmers may still be exposed to germs during the time it takes for chlorine to kill germs (certain germs take longer to kill than others) or for water to be recycled through filters. Many pool facilities use one filtration system for several pools. This causes water from various pools to mix and potentially spreads germs throughout connected pools in a very short amount of time. This means that a single diarrheal incident from one person could contaminate water throughout a large pool system or waterpark. 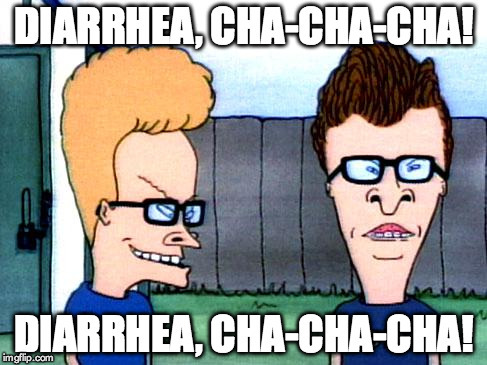 The ‘may contain cancer’ signs came from a citizen initiated referendum (1985’s Prop 65), not the legislature, and the law requires them for any situation where there’s one or more chemicals on an annually updated list of carcinogens (currently about 800 substances) present, and the degree of exposure is such that the risk of someone getting cancer is greater than 1 in 100,000 over a 70 year period. Which is such a low limit that most businesses simply slap the sign up as soon as any of those 800 chemicals are present in any quantity or form, real risk or not.

what is the opposite of active diarrhea?

Not quite an opposite, but verbal diarrhea isn’t very active. See: Trump…

Are these really public facilities if they always exclude the 40% to 50% of the public with some combination of irritable bowel syndrome, fructose malabsorption, inflammatory bowel disease, etc.? even when we don’t have diarrhea that day, or any reason to expect diarrhea that day? If they have to always exclude the 40% to 50% then they should just admit they aren’t actually public facilities.

(I know the prevalence of fructose malabsorption alone is around 30%. And these things are lifelong and aren’t contagious.)

Wouldn’t 1 day after normal diarrhea and 14 days after infectious diarrhea be more than enough?

I am definitely sympathetic to the notion that the signs are pointless at best and counterproductive at worst; but I find it very hard to argue with the “People who have, or have had recently enough to still be shedding infectious agents, a highly contagious condition spread by fecal contamination of water sources are asked to keep the hell out of shared water that others, including numerous children, will be in prolonged contact with and probably inadvertently swallow.” message.

Thanks to the ‘developed’ in ‘developed world’, ‘diarrhea’ is more of a joke than a grim slaughter in the US; but the main thing keeping it that way is the combination of cultural mores and civil engineering that keeps our food and water (mostly) separate from our shit.

It beats some diseases, in that cheap, simple, oral rehydration therapy can keep mortality to a minimum without access to advanced medical tech and resources; but we avoid widespread morbidity only through sanitation; and one need not search very hard to find examples of just how miserable things get when that doesn’t happen.

I tried to read the sign. Apparently, it says:

Wouldn’t 1 day after normal diarrhea and 14 days after infectious diarrhea be more than enough?

Why the 14-day standard which completely excludes something like 40% to 50% of the public?

I suspect what they meant to say was “If you might shart, don’t go in the pool.” But that doesn’t sound all legally.

I guess I should have known better than to ask.

I’ve always been someone who only poops voluntarily, so I forget that for some people it can happen without warning at any time of the day or night

I get the warning, so maybe “if you’ve had diarrhea within the last 2 weeks please refrain from entering the pool” would be okay, but prohibited or allowed? that hardly seems enforceable.

I’m no epidemiologist, so I don’t know what the correct period should be(and I wouldn’t be surprised if ‘14 days’ was either just somebody’s wild-ass guess or the result of several generations of secondhand knowledge distorting some actual medical expert’s rule-of-thumb answer; so I’m open to a different length of time(and would be quite interested to hear suggestions if we happen to have any medical types about); my point was merely that ‘infectious waterborne diseases in the pool’ is one of those areas where visceral disgust and actual good sense manage to approximately align(which is probably what disgust evolved to do; but isn’t something it is terribly reliable about).

It’s also a rough rule of thumb because there are other causes of diarrhea not related to pathogens; side effect of certain drugs, some dubious dietary choices, etc.

It’s also a rough rule of thumb because there are other causes of diarrhea not related to pathogens; side effect of certain drugs, some dubious dietary choices, etc.

I mean I have fructose malabsorption, but even before that, as a kid, I always had diarrhea once or twice a week. I thought occasional diarrhea, like headaches and itching, was just part of the human condition, and my irritable bowel syndrome and fructose malabsorption just changed the frequency.

And I don’t eat sweets, or sweet fruits, but occasionally have other fruits such as tomatoes.