The Mixed-Up Brothers of Bogotá: a study of nature, nurture, identity and privilege 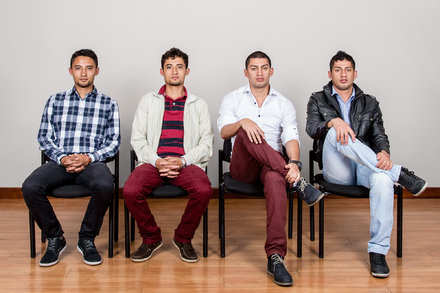 The Mixed-Up Brothers of Bogotá

After a hospital error, two pairs of Colombian identical twins were raised as two pairs of fraternal twins. This is the story of how they found one another — and of what happened next.


This is a really interesting story about two sets of identical twins from a rich and poor family background. One of the twins was accidentally switched with one from the other pair shortly after birth, and the four only met after reaching adulthood. In the meantime, both sets had been raised as fraternal twins. It’s a pretty long read, but it’s especially fascinating in that you don’t just have two sets of identical twins with similar personalities responding to different environments, but also a similar relationship between those identical twins playing out in the different environments.

At breakfast in La Paz, however, Carlos felt that Jorge was provoking him once again. Moments after Carlos pulled out that photo, Jorge turned to him and brought up a sensitive subject the two had already discussed in many late-night conversations: Who would Carlos have turned out to be had he been raised in Santander?

Come on, Carlos, Jorge said — look around. Do you really think that if you had been raised here you would have ended up an accountant or even a professional?
Carlos refused to concede Jorge’s point. Who was to say he wouldn’t have found a way to go to school, to get his degree, to be working in the very same firm where he had only just recently been promoted?

William knew that Carlos was unfamiliar with that part of his history. Carlos probably did not know that William, as a 6-year-old, used to walk with his mother to this very town, La Paz, for five hours each way, just to buy groceries; they would spend the night at a kind woman’s place in town and then walk home again, groceries on their backs. And Carlos could not know, could never really know, how many hours William had spent hacking sugar cane with a machete as a teenager, his skin crawling from the heat and the itchy scraps of stalk, carrying 50 pounds of cane at a time, mindless, painful, strenuous work. Carlos had spent those same years, William knew, flirting with girls at an excellent public high school, playing basketball with his friends, racking up points on some video game, the name of which William would not even know.

What an amazing and absolutely fascinating story. Very moving.

So there was this newborn baby boy, one of identical twins from Santander, who was taken to a hospital in Bogota for treatment of a digestive problem. His parents named him William and his identical twin, Wilber. Wilber was left behind in Santander. This baby who was taken to the hospital entered as William but came out as Carlos and stayed in Bogota where he grew up as fraternal twin to Jorge.

In the same hospital on the same day, a pair of identical twins was born and were named Carlos and Jorge. Carlos was accidentally switched with the Santander boy, was released as William, and grew up in Santander as fraternal twin to Wilber.

In other words, not only were their circumstances switched, their names were also switched. Do I get that right?

The NY Times story focused on the switched brothers [Carlos and William] as well it should. But I wonder if the two unswitched brothers [Jorge and Wilber] ever thought of what may have been if they were the ones who were switched?

This topic was automatically closed after 585 days. New replies are no longer allowed.