@RonFilipkowski
First, hydroxychloroquine was their alternative drug to treating covid. Then it was ivermectin. Now, time to buy stock in Viagra, because MAGAs are about to buy it all up. https://t.co/QqOuquMox4

Why the Newberg school board is national news

Is it just me, or is Ben from “Free Oregon” trying to be Negan from The Walking Dead

I’m sorry, I was too distracted by his BS and outdated hairdo to figure out if he was trying to be that particular asshole or just a garden variety asshole.

Is it me or did Ben describe an indoctrination from adults outside the district as his own group or some amorphous other? Because it seems like the only indoctrination is from Ben, his group and others like it.

Do we even want to know what’s up with those little lightning bolts on the “art” on his wall?

Thanks. We should all be keeping an eye on what’s going on in Oregon. In the streets, in the school boards, in the hospitals, in the voting booth, and in other venues, the state is giving the rest of the country a preview of the struggle between the fascists and everyone else.

Do we even want to know what’s up with those little lightning bolts on the “art” on his wall?

Perhaps he wants to become known as “Der Sturm-pundit”.

The Supreme Court takes up a case, brought by Ted Cruz, that could legalize...

And given the proclivities of the USSC as currently constituted, yeah, slam dunk for the grifters. God, I hate this timeline.

keeping an eye on what’s going on in Oregon

Oregon is unusual in that it’s a “liberal” state that is sparsely populated and rural, so the chuds think if they show up and play their games they can flip it

They don’t understand this place at all 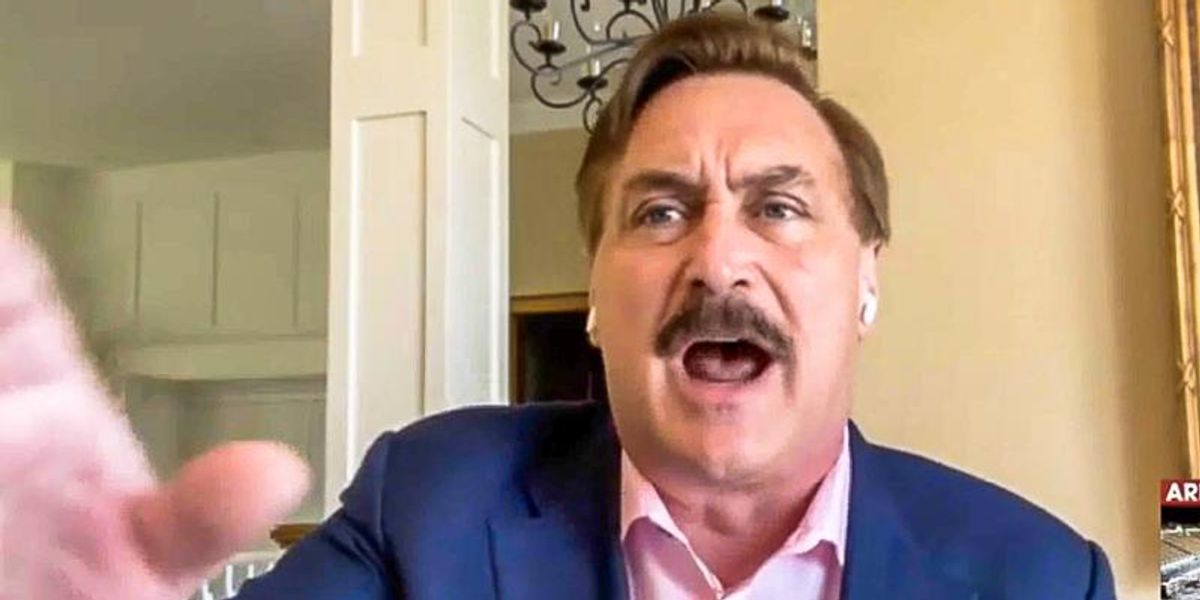 Mike Lindell says he has 'enough evidence' to put '300 million' Americans in...

MyPillow CEO Mike Lindell argued this week that "300 million" Americans belong in jail for election fraud.Lindell's remarks on Real America's Voice were first reported by Right Wing Watch."Everything you're going to see over these next seven months...

I guess the other 29.5 million will have to be jailers.

He IS aware that slightly south of 160 million in total voted, right?

The 2020 Election by the Numbers

It’s almost over. Yesterday Electoral College electors convened virtually or in person in state capitals across the country to cast their votes. The …

Declare 300 million Americans guilty, put Trump back in charge and let him build a wall around the country, and…well, the whole in jail aspect will have kind of taken care of itself, won’t it?

Can we all sue him for defamation?

He just wants to hold all those grade schoolers and toddlers who failed to vote for God-Emperor Shitstain accountable for their crimes.

“Timmy, you knew this was going to happen when you went to kindergarten that Tuesday instead of voting! No crying about it now.”

It doesn’t help that Idaho is the current hotness of the radical right after getting their established home bases pushed out of most of the other western states.

In a 4-3 decision, the Ohio Supreme Court invalidated legislative district maps and sent the Ohio Redistricting Commission back to the drawing board.

Gah. I wish we could just use watersheds or something that actually makes sense in that everyone who lives in that area shares a concern for the public commons. There should have to be some logic to the districts besides “this is how we can win.”
When I’m queen of the world everything will make so much more sense.

The major political parties have to at least seek to appear to dealing in good faith. In the US it’s only 1 out of 2.

The Republican National Committee says it will require candidates to pledge to not participate in debates run by the Commission on Presidential Debates. What would replace them, if anything, was unclear.

The only debates the party’s candidates will be allowed to participate in are ones that are completely rigged in their favour.

JFC. No platform. Now no debates. They aren’t even putting on appearances anymore.