The soft sexism of functioning pockets

Try Nudism. I did. It’s a real conversation starter…with the people on the bus, with the police and, later, with the judge!

Actually, my beef is “Why, oh why do they insist on making white pockets for black (and dark) pants?”

I used to get their catalog. I never ended up getting anything but I always though a lot of stuff they had looked handy. Some of their clothes for bigger guys sounded smart, like longer shirts, but I am not a big guy.

Why, oh why do they insist on making white pockets for black (and dark) pants?"

But when my wife’s clothing does have functioning pockets, she usually asks me to carry her wallet/phone for her anyway. Doesn’t like bulgy spots, but I think it’s silly. Plus I don’t like being responsible for potentially losing someone else’s wallet.

Fashion over function. The military in garrison sometimes has not fake pockets, not pockets that are sewn shut, but functional and available pockets that they aren’t allowed to use, because putting stuff in them might look sloppy. So you’ll see things like marines carrying their wallets in their sock. http://terminallance.com/2010/01/12/terminal-lance-3-looking-professional/

Ladies can wear cargo shorts too.

All my shorts are men’s cargo shorts. So many pockets! So comfortable!

One day, when I have some monies, I’ll have a utilikilt. One thing I do have is a Macabi skirt, with its big pockets and great versatility. Try it out, guys!

I thought those were verboten? 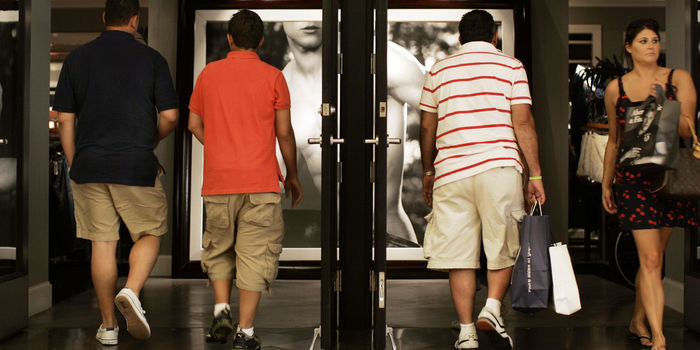 Relationships around the country are being tested by cargo shorts. Men who love them say they’re comfortable and practical for summer, while detractors say they’ve been out of style for years.

I’ma put this right here for you ladies (and whoever else) likes dresses with pockets… and dresses that are customizable:

Pfffft. Our home is a cargo shorts/pants home.

Indeed. If you google “pockets sewn shut” or “fake jacket pockets” none of the links on the first page of results is about men having the problem,

I dunno. That might be because men expect this and don’t consider it a problem.

The very highest end suits - silk and worsted wool - have all the pockets sewn shut. You work with your tailor to figure out which pockets you can use without ruining the fall and line of the suit, and those pockets are unstitched.

Even untailored suits often come with all the exterior jacket pockets or the two front pants pockets stitched shut - you open them with a razor blade if you want to use them. I have done this several times.

My late father didn’t have a lot of expensive vices, but he’d drop a thousand dollars or more on a suit every four or five years. My mother said he didn’t gamble or run around with other women or have a boat, so she figured financially she was getting off easy with him being a sharp dresser. He bought me an $800 suit when I was a teenager. That’s how I know this stuff.

If there’s a structural sexism issue, it’s that women’s clothes are designed so that when the pockets are full, it ruins the look that the buyer was trying to achieve.

Me too. Go check out my link for dresses with pockets!

And the pockets in women’s cargo shorts are usually without gussets or functional pleats, limiting capacity.

Try Nudism. I did. It’s a real conversation starter…with the people on the bus, with the police and, later, with the judge!

I tried it, but the cashier wouldn’t accept the coupons that I kept safe between my butt cheeks.

The two men’s suits that’s I’ve bought in my lifetime came with the pocket sewn shut. My mother opened the first and the tailor that sold me the second open them on the second. I think this is just how they are manufactured.

between my butt cheeks

Getting mad at men with pockets because women don’t have pockets is probably just a little misplaced.

I’m wearing cargo shorts right now, and I am seriously considering starting a line of tweed cargo shorts. I also want to come up with single-use-case pockets, like one for your pencil, for your fishing flies, your Damascus knife, and for two dollar bills.

As a man who grew up with two sisters and now has two daughters of his own, this makes me nuts. Fun fact about girls younger than 16, they very rarely carry purses and when they do 90% of the time I end up hearing “Will you hold on to this while I…” So since the have no functional pockets they either learn to be dependent on someone to bring stuff for them or just forget it all the time.

I think this is some sort of hidden subsidy by the garment industry to keep the purse industry alive.

On the other hand I wore a fanny pack until just a few years ago and frankly miss being able to sit in a chair without pockets full of keys/phone/wallet/etc jamming into my legs. The “man purse”, another functional victim in the name of fashion

Here’s a vaguely related question… How do you get stuff out of the lower pockets on cargo shorts without looking like you’re a stork balanced on one leg or hunched over to the side wishing you had a tail to chase?