The subtle brilliance of Waffle House

I’d rather have no maple syrup than crappy maple syrup. Honey or Caro dark are preferable to watered-down Grade D maple.

I would love to know where it is you all are finding good food at a waffle house. Every time I eat there it’s the same story… “after seven years I thought I would try again and it would be good this time…”.

I also didn’t enjoy the fight that almost happened between employees about tasks that weren’t getting completed, since that is a management problem and not something employees should be pitted against each other over.

It’s totally my NE privilege talking, but I don’t think I’ve ever had bad maple syrup. All of the local grocery stores have at least 5 or so brands, all of them from NY, NH or Canada (or blends of the three). The cheapest one at my go-to store ($17/qt) is locally harvested. I think I’d be furious if I opened a bottle and it was how you describe. They’d probably be run out of the region on a rail.

Speaking of grading, have you ever had Grade B? It’s syrup that is harvested later in the season and is darker, richer, more “mapley” and soooo good. I rarely see it anymore, but our local coop used to sell it in bulk for around $9/qt. Good lord, those were high times.

Fair point! The Eat ‘N’ Park near my SCA stomping grounds got fairly blasé about the odd chain mail divots left in their vinyl, so long as the blades stayed outside.

OMG, thank you for reminding me!

One of the selling points of The Original Pancake House (started in Oregon) is that they serve real maple syrup and butter. I wasn’t thinking they’d made it to Florida, but in fact they’re all over the country now.

America's finest Pancake House with over 90 franchises throughout the US, is a family oriented breakfast restaurant. Signature items include the Apple Pancake, Dutch Baby, Vegetarian Omelet, Banana and Cherry Crepes, Corned Beef Hash, and the...

The locations I’ve been to require cash rather than credit/debit, FWIW.

I can definitely recommend this place!!!

ETA: @orenwolf this info is mostly for you.

Goodhart's law is an adage often stated as, "When a measure becomes a target, it ceases to be a good measure". It is named after British economist Charles Goodhart, who is credited with expressing the core idea of the adage in a 1975 article on monetary policy in the United Kingdom: Any observed statistical regularity will tend to collapse once pressure is placed upon it for control purposes. It was used to criticize the British Thatcher government for trying to conduct monetary policy on the ba...

Bob Evans is where you take the family for a reasonably good facsimile of farm food (i.e., soul food with less seasoning)

Looked it up and I’m not imagining, (at least some of) the Texas stores used to be Owens restaurants. As in “Owens breakfast sausage.” Among other things, they had spaghetti with Owens sausage in the red sauce, and other dishes wherein one would not typically expect breakfast sausage.

I’m not familiar with the brand but Bob Evans sausage has long come in the same kind of roll I’m seeing for a google search. I’m guessing maybe they’re linked (sausage pun) at a corporate level. I enjoy Bob Evans well enough but generally find the need to have a little hot sauce handy.

I was partial to the Slim Jim (a sandwich, not the beef stick). And so help me they made a good plate of spaghetti.

I guess we don’t get a lot of these well-known chains out in California. 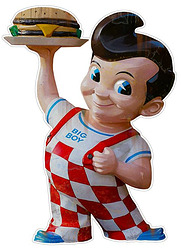 I can’t think of any major breakfast chains around here other than IHOP and Denny’s.

They used to have Coco’s and Jojo’s out there, but this was before/during the Carter administration. We had them in TX thru the mid- to late-90s.

a waitress named Flo or Marge or Tiff

My recollection is that Waffle House also makes a fine burger.

They were but I didn’t know much until today – I figured one had bought out the other, and they did, but they operated as “Owens” in Texas for a while (I’d figured they were separate companies, and the buyout occurred whenever the sign changed from “Owens” to “Bob Evans”).

Is Bob’s Big Boy still around?

Technically. Google says there are five of them left in California. I haven’t seen one in years though.

Looked it up and I’m not imagining, (at least some of) the Texas stores used to be Owens restaurants. As in “Owens breakfast sausage.” Among other things, they had spaghetti with Owens sausage in the red sauce, and other dishes wherein one would not typically expect breakfast sausage.

Every dish at Bob Evans – including the side vegetables, salads, etc. – is made with pork sausage or bacon, which cannot be omitted as it’s already mixed in…and often isn’t even listed as an ingredient. Ask me how I know!

How about weird regional chains 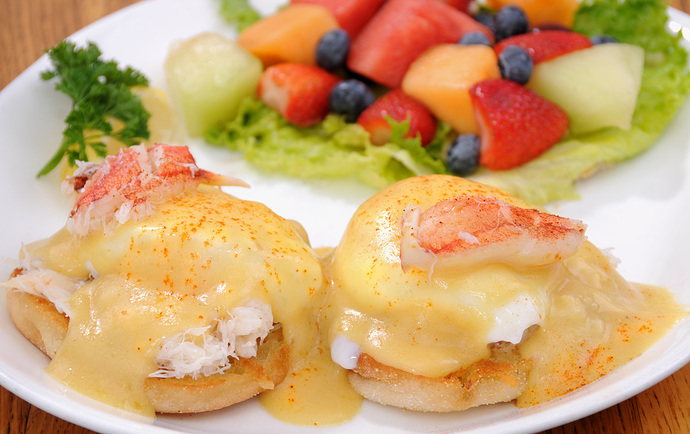 Shoney’s was a Big Boy chain

ya, Shoneys is Big Boy minus the prominent mascot (but the kids menus have Shoney Bear) plus stuff you need to have in the south e.g. grits and sweet tea.

The thing I love about Waffle House is that it understands exactly what it is, and commits to that absolutely.

And as @knoxblox points out, the rest of the menu is usually cooked in margarine which is also a hard pass.

No, no, no. I mean Waffle House uses cooking oil for making eggs, and way too much. It’s a slimy mess. I don’t know what other restaurants like IHOP or Cracker Barrel use, but I think their eggs are cooked in margarine, and not too much of it.

Sorry if I misread, but all of that me off. I can’t even eat eggs my wife makes them with fancy olive oil.

IHOP is a mediocre chain that seems to get packed on weekends with people who think THAT is what fancy breakfast/brunch is supposed to be (belgian waffles, french toast and swedish crepes?? - so INTERNATIONAL). Go ahead and go once, but I guarantee you I can find a WAY better breakfast within 5 miles of any IHOP in the southeast. They only exist in larger towns, usually at the fancy shopping center closest to the biggest churches. From IHOP, drive toward the old main street/downtown, or towards the nearest golf course/lake and look for an older, freestanding place with a parking lot full of cars. Could be bbq, catfish, meat and 3 with either someone’s first name or country in the name or a mexican place.

Waffle House is completely different - it’s dead standard diner food, but everything is done fresh to order with reasonably decent quality ingredients. Because there are so many and often in the middle of nowhere, it may well be the best restaurant available for miles and certainly late night or early morning.

At home, I use just enough olive oil to keep them from sticking to my non-stick pan. I can’t abide more than that.

I would love to know where it is you all are finding good food at a waffle house. Every time I eat there it’s the same story… “after seven years I thought I would try again and it would be good this time…”.

One goes to Waffle house when they want food and don’t really care if it’s hi brow, low brow, or no brow. It’s like eating food from a McDonalds: The food is mediocre at best, but I can walk into a McDonalds anywhere in the US (for the most part) and I know that I’ll have a mediocre burger, fries that are meh, and a diet soda with too much ice in it. Their gimmick is consistency, and Waffle House leans on that pretty hard.

IHOP is a mediocre chain that seems to get packed on weekends with people who think THAT is what fancy breakfast/brunch is supposed to be (belgian waffles, french toast and swedish crepes?? - so INTERNATIONAL).

I think our IHOP is packed on weekends because it’s an inexpensive place for families. I don’t think people even remember that the I in IHOP means “International.” Also, they appear to have monthly specials. That’s the reason why IHOP never caught on with my group of immediate friends in the 80s, 90s and beyond–it was too family friendly.

My goal is to someday make it to a Waffle House. (My husband who gone maybe a half dozen times tells me I need some bigger goals.