They'll never see this tiny camera hidden in a screw

I can’t even remember the time I bought screws that didn’t have 6 lb. of coated glass in them.
Seller’s gonna make a mint on the set-dressing potted hydrangea, the scene lighting toilet bowl, the gobo toilet tank… 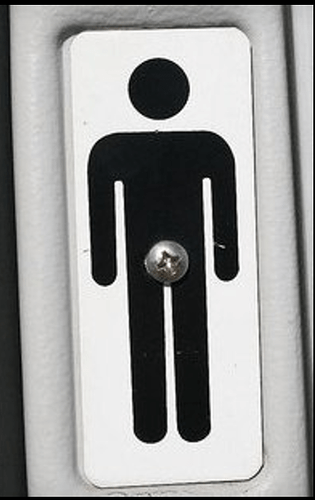 Great idea. You could take video of yourself on the go like a pro.

I need something a little bit more robust than that and easier to integrate. It needs to watch forwards and backwards, and it needs to be able to activate itself with the rest of the gear on the bike.

Ah, ok. I thought you had tiny cameras specifically in mind. In terms of surveillance tech more generally; yes, situation dire; probably even more advanced than the advertisers.

Apparently I’m the only one thinking that installing this screw means you have to add a screw. So It’s either going to look out of place, and added at after manuafature. Or this screw has to replace an existing screw.

This is weird. You’d think something this small is fairly new, but it’s available in either PAL or NTSC. Which pretty much means it’s older than HD.

Aside from low-res sensors still being cheaper and smaller, I suspect it has a lot to do with compatibility:

NTSC composite video is not exactly god’s gift to clarity; but it’s compatible with everything that isn’t PAL(and some things that are) and can be implemented with a single signal line of no particular merit(you can’t quite get away with anything; but even moderately lengthy runs of cheapo RCA cable, even the stuff sold for audio applications, will work in practice).

Any of the alternatives have the drawback of being comparatively obscure; ‘standardized’ loosely enough to be less than entirely helpful, requiring markedly more capable cables and/or more signal lines; or some combination of those.

SDI is a much nicer option; but it requires coax or equivalently nicer cabling; and Team Media is obnoxiously protective of it(un-encrypted digital signals being the tool of terrorist pirate satan, after all); so it’s a “pro” feature only.

VGA works surprisingly well over long runs of lousy cable(though it needs a potentially bulky number of signal lines) and is supported by everything(though fewer recording options than composite; which I presume is a problem for perv-cams).

Something like MIPI CSI is mostly designed for short distances and not terribly helpfully standard in terms of cabling and connectors and the like; probably a bad option outside the chassis of a device with a camera embedded in it.

Firewire’s, um, fire, has mostly gone out of the universe; though it might have been an OK option at one time; though probably not an inexpensive one.

USB has distance limits, and requires that the receiving device be a full computer; not just a dumb monitor or DVR; but at least it supports better quality than composite, is ubiquitous, and can be recorded easily.

Going full IP cam is also an option; but adds a fair amount of cost; and the cabling is a little bulky compared to composite(though distance is pretty decent, especially if you only need 100mb speeds).

Composite video is certainly junk; but it does’t really have an obvious good successor(for the purposes it serves in this case, obviously it stopped being a good idea about a zillion years ago when S-Video or component become options, and that was mostly before digital or HD anything showed up); at least not one known to me.

USB has distance limits, and requires that the receiving device be a full computer

Thanks for the comprehensive reply.

Or, if you lacked the foresight to bring and chew gum, there’s always a booger.

Or, you know, other stuff.

My impression, from when I was shopping for tiny cameras (for robots, please, and not perv robots either) is that there is almost certainly an otherwise closely equivalent module that is USB.

The actual sensor/optics packages all seem to draw from the same well of demand for webcams and cell cameras (until you get to the, substantially higher, price point where the hardware was born for video camera or surveillance duty, or the one higher still for machine vision/specialty industrial stuff); but the ones intended for ‘integrated’ installation(aftermarket rearview cans for cars, cheap surveillance cameras) are mostly composite: it’s trivial to wire for, supported by tons of cruddy little monitors for real time display, 8-16 channel DVRs or capture cards are cheap. The remainder are mostly USB, since it’s less awful, handles both power and data, and assuming the host device isn’t hopelessly limited, choosing recording, display, or both is a cheap, flexible, software problem rather than requiring an additional investment in framegrabbers(which can get pricey if you want decent ones). It would probably dominate the ‘installed’ use case as well, but for the fact that cable length limits are so restrictive without proprietary extender modules.

With USB3 and onboard H.264 encoding(and the…mostly…standardized UVC) the USB direct attached ones have also eaten at least the low and medium end of what FireWire used to do; and once your budget gets beyond that, it’s probably IP cameras (if a compressed stream is acceptable; and the lovely flexibility of Ethernet is desired) or some sort of pro-grade digital output with capture card that someone who does fancy video stuff would be a better person to ask.

Unfortunately, there doesn’t seem to be a real ‘heir to composite’ that is less dire; but still cheap to cable, capture, and display.

Or, you know, other stuff.

Close! Tape may also be an option.

Though I also wonder what one of those stun guns would do to the hardware.

Though I also wonder what one of those stun guns would do to the hardware.

Possibly upset the circuitry (??), although just using a stun gun would add another level of satisfaction.

$20? You’re clearly not shopping around.