Originally published at: This man has a skin condition that makes it possible for him to stick heavy objects to his face | Boing Boing

I wasn’t aware my skin took in any oxygen (at least from the surrounding atmosphere.)

Oh I had a stoner buddy back in school that did this when you passed him a joint, he just couldn’t release it after it was in his hand. Amazing, I know.

Reminds me of the “Rook” and “Stiletto” by Daniel O’Malley (which seems to be a tv series now), which is kind of X-Files meets X-Men; “We have someone who can grow broccoli from his head! How can we weaponise it?” I made that superpower up, but it’s not far off what some of them can do.

"Magnetized" nurse's demonstration of metal key sticking to her because of...

Just because someone has a medical degree does not preclude them from certain displays or statements of lunacy. Please recall disgraced former President Trump’s physician, Harold Bornstein, m…

The real cause is too many vaccines, obviously.

So he actually makes a living off of this? Imagine telling people, “Yeah, I stick things to my body for a living.” That would be pretty cool, actually.

It’s quite possible there already is a Marvel mutant character like that… they have hundreds they’ve come up with, and many have deliberately crappy powers. Like the guy with blue skin. That’s it, that’s his “power.” They make the DC characters like Matter-Eater Lad and Arm-Fall-Off-Boy look positively over-powered in comparison.

uh no. Yet it should be noted that Dr Horrible already has a side-kick with super-powers of moisture: “moıst” 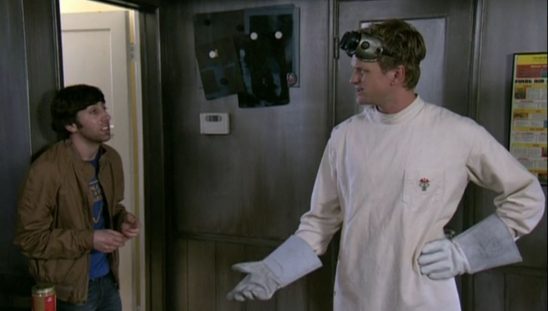 I vaguely recall one of Xavier’s mutants being a boy with an unusually long and fragile neck. Imagine going to school with Wolverine as your gym teacher and that being your mutation.

Oh?
So, does he breathe thru his skin as well?
Does he have to peel his clothes off, like tape?

He must have had a high Bogart-Datjoint Index.

Sadly James Randi passed away before he could directly address these vaccine frauds, but here is a video of him exposing and explaining why sweaty folks aren’t magnets and friction isn’…

They make the DC characters like Matter-Eater Lad and Arm-Fall-Off-Boy look positively over-powered in comparison.

I always thought Fallout Boy was one of the stupidest band names I’d ever heard and wished they’d called themselves Arm-Fall-Off-Boy. I’d have still thought it was a stupid band name, but at least then they’d have found a way to entertain me.

I mean, it’s the same thing that helps sucker apparatus stick to surfaces, like a shower caddy.

He perfected how to roll over on a sofa while putting as little energy into the event. Lazy wouldn’t even cover this Dude. His career was a toll taker on the Garden State Parkway, perfect match if ya ask me.

So, does he breathe thru his skin as well?

It’s why he doesn’t swim, he would drown through his skin