Oh, and dear god is it ever good. Grew up on the stuff. Now lactose intolerant, I’m unable to find the product in a froyo formulation. Once a year, I crack open the little bottle of barely effective enzyme tablets just to catch some Tail again for one brief moment.

I never knew it was a ‘Canadian’ thing. You really don’t have this anywhere else??

And unlike, for example, poutine it has not caught on in the States.

The place I usually have it is at Chinese restaurant dessert buffets. 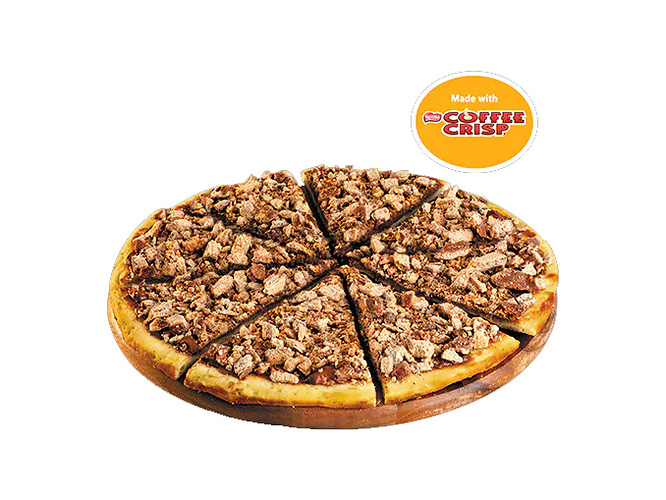 In the 90’s border guards would ask people from Toronto what the phone number of Pizza Pizza was. If you got that right… you were legit.

This is my favourite ice cream - and you’re telling me it’s only in Canada? That you don’t have this where you are? Neato.

Coffee Cripse is Nestle. FUCKING BOYCOTT NESTLE! (They steal Canada’s water and sell it back to us. Seriously, fuck them.)

Also not in Quebec. When a chain grocery stocked it briefly, they swapped out the licorice flavour. Quel dommage. So good - even before I liked black licorice.

It is the finest of ice cream flavours, no question.

It’s the perfect example of something being greater than the sum of its parts. I despise black liquorice flavour, but this is unquestionably my favourite ice cream. The orange and the liquorice mix together and something magical happens. It tastes like neither ingredient, but rather some amazing new thing.

If you like to make ice cream at home, Tiger is challenging but can be done. The orange part is easy- regular ice cream with orange extract for flavour. The black swirl can be achieved by melting down black liquorice candy in a double boiler and carefully thinning it with heavy cream. Recipes for this exist online and they turn out pretty well. I’ve done it twice and it was quite good both times.

I misread that as “Foothills Cemetery”.

It was always Tiger Tail in Ontario. Never cared for it myself, but I’m not a huge ice cream person.

Another treat I found out is an Anglo Canadian thing is ‘chocolate bananas’ - where you slit an unpeeled banana lengthwise, stuff it with chocolate chips, and bake it in foil till it all melts. Intoxicating. None of my American or Euro acquaintances seem to know this, but most Canadians remember.

This was my sister’s favourite flavour growing up in the GTA. She loved this stuff.

For me it was Tin roof, which I think was also a thing here in the states and is now difficult to find either north or south of the border.

Yaaaassss Tin Roof is a close second for me too. You don’t see it much here either anymore, sadly.

I found a Ben & Jerry’s flavour in the US that was close to Tin Roof but I forget which one it was.

Banana + chocolate chips + marshmallows. Wrap if foil, put it by the campfire and you’ve got a banana boat.

There’s loads of regional specialties in Canada. Some of which are sold in all stores in Canada, some of which are only available in some regions, and some that aren’t really that common so you’re only going to get it if you know someone who makes it from scratch.

lived in WA for several years, a couple of lifetimes ago. would visit BC frequently. i have enjoyed fiddleheads and love Nanaimo bars. tried spruce beer… not to my liking.
i really, really am intrigued by tiger ice cream and will hunt down a recipe to try it as @VeronicaConnor suggested could be done.
BTW: i looked up flipper pie and politely say “no thank you”.
(also not a fan of poutine. don’t hate me.)

A steamy with cole slaw and cayenne pepper.

Me, I prefer Panda Paws ice cream as my inhumane sounding treat of choice.