My ability to believe these lying trump sycophants has been weakened by their attempts to divide America.

What do you guys think of them trying to stop midterms? “Russians are interfering and we need to postpone midterms”. Trump has made several comments in the past about midterms.

Trump has made several comments in the past about midterms.

Nielsen does not directly answer whether a government shutdown would affect election security work, but implies DHS would “continue to prioritize” assistance to states “within our budget.”

He seems to waffle about the timing. “Within our budget” said Neilson. I believe she has received no additional funds from trump for that kind of task.

What do you guys think of them trying to stop midterms? “Russians are interfering and we need to postpone midterms”. Trump has made several comments in the past about midterms.

The read I get off this announcement is that they’re not trying to stop or postpone the midterms but rather give the regime a pretext to call certain election results into question and delay the seating of those Congresspeople if things don’t go their way.

Dem candidates supported by the DSA and Our Revolution are gaining traction on the left, the Kochs are feuding with Il Douche on the right, and the larger goal of the regime and its patron to undermine confidence in liberal-democratic institutions remains in place.

@xeni Nice one about the German.

I’d like to point out that once again we are at the mercy of the few percent of “undecided voters” that are somehow swayed by all this nonsense, because the rest of us are pretty much far better educated and decided long long ago

I cannot even fathom what an “undecided voter” is like about the rest of their life, that’s got to be one weird critter

I just hope the country doesn’t boil over by 2020, the reality vs “we’ll make our own reality” divide is just staggering

Seems unlikely that he would do so voluntarily.

Also, Pence has been remarkably quiet for quite a while. That scares the hell out of me.

Should we be comforted that Nakasone is from St Paul, Minn. and therefore possibly above average?

“In the context of 2018, we are not yet seeing the same kind of efforts to specifically target election infrastructure — voter registration databases, in particular.

No need to jimmy the window when you already have the keys.

Here’s my question: Why are politicians and pundits unanimous in saying the Russians didn’t change actual vote tallies? Is there any evidence they didn’t? Or is it unthinkable, and so we are not thinking? 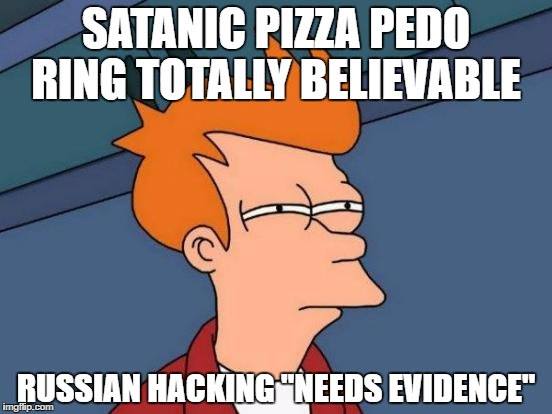 praise baby jeebus I hope so!!!

Can someone explain to me why this isn’t being addressed as an act of overt aggression by a hostile government? This is literally an act of war, right?

I think China is also in on this, and it’s just not being reported.

Here is my reasoning:

Last year, I got back in touch with a cousin I hadn’t seen in years. He lives in Shanghai. We Facebook friend and I find out he’s an ardent supporter of Il Douche. Says everyone (I guess that means expats) in Shanghai is.

Uh, cuz? You DO know you sit behind the great firewall, right? You only see the search results they want you to see and it doesn’t matter what passport you hold.

The Chinese play the long game, and I think they’re willing to put up with this tariff nonsense for a while if the end is a destabilized USA. They’re quietly hoovering up all of the trade and good will Il Douche stomped on, so they may not even notice our tariffs. Heck, they have quite a sympathetic story these days!

By taking his eyes off the IP prize and putting it on US Steel and Aluminum, Il Douche has f**ked this country far more than China. And the expats have bought it hook, line and sinker.

trump’s going to take down the country with him, 2020 is going to be brutal, it’s like cornering a wild animal, it’s going to flail and we’re going to get hurt

but the emergence of the 4chan trolls qanon is certainly a sign we’re at a boiling point and unfortunately even if we eventually “win” by surviving and voting him out of office properly. we’ll all still lose from the damage done

John Bolton is not the Secretary of State

“Seeing all the intel chiefs on stage say one thing, and knowing the President – who wasn’t there? – believes another was weird.”

That depends on your definition of “believes”…

What the 260-lb cheeto in charge “believes” seems to change minute by minute, sometimes within the same rambling, sputtering breath.

I guess what I’m saying is the only thing I think he actually believes in is that he is always right, especially if he’s wrong.

I believe that, if I was ever open to voting with/for the GOP, the current shit factory of incompetents in charge wouldn’t sway me to their favor – even with help from the Russians.

But of course, I’m not their target. At least not that kind of a target.