The Marines were friends of mine I go to the range with once or twice a year, Iraq veterans who take weapons seriously. They’d likely take a dim view of this “funny” commercial as well (and these are also guys with great senses of humour who love action movies).

Blowguns. An ancient weapon, which require specialized skills to properly manufacture and effectively use. 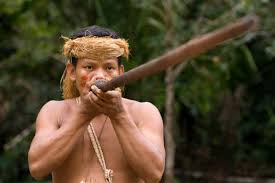 This is something most gun owners can get behind.

So the NRA will support his opponent?

If you forgot where this was, it was right when Luke surrendered to Vader. It was patrolling around the main shield generator station. It’s only on screen for a second or two.

Also, that was the best line in that movie.

I asked but he said he wanted to be no trouble atl.

I can only respect a girlfriend’s father if he can kill me without needing a gun.

Framing your argument as “either you agree with my politics, or you hate children” is not really a valid tactic

My new political party We Hate Children Political Party or WHCPP was really doomed from the start. Mandatory abortions. Free daycare/workcamps. Student loans for kindergartners. And a new Youth Tax bracket. Our motto: Forcing kids these days to have respect for their elders.

Protecting children and possessing guns are not mutually exclusive things.

My first thought is shouldn’t he not be squatting where an inquisitive kid can easily grab that gun?

A spear-thrower or atlatl (/ˈætlætəl/ or /ˈɑːtlɑːtəl/; Nahuatl languages: ahtlatl; Nahuatl pronunciation: [ˈaʔt͡ɬat͡ɬ]) is a tool that uses leverage to achieve greater velocity in dart-throwing, and includes a bearing surface which allows the user to store energy during the throw. It may consist of a shaft with a cup or a spur at the end that supports and propels the butt of the dart. The spear-thrower is held in one hand, gripped near the end farthest from the cup. The dart is thrown by the act...

Protecting children and possessing guns are not mutually exclusive things.

What fallacious nonsense is this?

Framing your argument as “either you agree with my politics, or you hate children” is not really a valid tactic.

Comedy Gold right there. Comedy Gold. Thank you for that.

I’ve read this headline a few times, and have, each time, had to do a double take. My brain always parses it as “Tough guy Ross Kemp…” 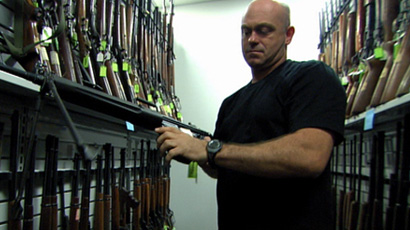 I’m sure one of Mrs Mitchell’s boys would know better than to mishandle a “shoota”.

The people on the news say those are the ones you have to watch out for.

It is also not controversial in most of society for fathers to feel it is their primary function in life to provide for and protect their kids.

But it isn’t his kids. He wouldn’t have made this joke about a son. There wouldn’t be a girl sitting across from him. This is a joke about owning his daughters, controlling their actions, AND being fucking stupid about how to handle a gun.

While everyone is talking about the gun crap, I can’t help but be concerned about his regulatory stance. Our lawmakers (begrudgingly) enact regulation to protect the people from corporate and industrial activities that harm us all. This guy and his ilk are more concerned about profits and corporate interests than he is the people all the while pretending to be a “good ol boy”. It’s slimy, sick, and people fall for it every time mainly because no one in the press will talk about the duplicity of people like this.

Well see the problem is some regulation is good, and some of it can be harmful or at least unnecessary and just adds unneeded bureaucracy. There are many laws needed for consumer protection. There are some that are not. One really have to get specific and make up at least a pro-con chart.

Taking a chain saw to regulations doesn’t sound like carefully considering which laws are which.

Regulations might come from a desire to level things out (eg, antitrust), or as a response to some sh!t that just went down (eg, nine-eleven). The initial desire is usually good, but the devil is in the implementation. You get a bunch of robots chanting in an infinite loop that all regulation is bad, then get a bunch of morons (see the current administration at the federal level) who mishandle it (or more rightly, intentionally screw up the implementation), and it’s a self fulfilling prophecy.

Back to that dumb ass ad, what also struck me is that Pappy Kemp made the young 'un recite them things about what he’d focus on, like health respect, etc. Kinda smacks of paternalism too, in a way.