Well, you know, I love to read. Actually, I’m looking at a book, I’m reading a book, I’m trying to get started.

Yep, that sure is how people who like to read books talk about books. I’m convinced.

The important question is “What’s he reading?” Got to be something that suits his ability and interests…

To be fair, this is part of the “Who Cares About” series and just has a very poor choice of title.

Well, you know, I love art. Actually, I’m looking at an art, I’m doing some art, I’m trying to get started.

Well, you know, I love French cooking. Actually, I’m looking at a “crape,” I’m tasting a flavor, I’m trying to get started.

Well, you know, I love hiking. Actually, I’m looking at a hike, I’m going to do the hikes, I’m trying to get started.

I was looking to read a good book the other day. So you know what I did? I sat down and wrote one.

Maybe he is looking at Steve Bannon’s reading list…

I never knew they did a board-book version of those.

I miss the days when we had a true bibliophile in the White House.

That man is a national treasure.

Wow, I’m actually in a position to advise the great tRump!

I get the not having a lot of time to yourself thing. I’ve got a six year old, and you can almost never get a moment to yourself. But… Everyone has to take a dump sometime! Leave a book on the tank of le toilette, and you can get a chapter in here and there. Depending on your diet, you can be pretty much assured of a few minutes of quiet and solitude even if you only say that you’re dropping the kids off at the pool.

So wise! Maybe I can have a lucrative cabinet position as well. Well… I’m actually not very good at sucking up… and I don’t have any Russian connections… and I’m not a millionaire… So, I guess no position for me in the new Reich. 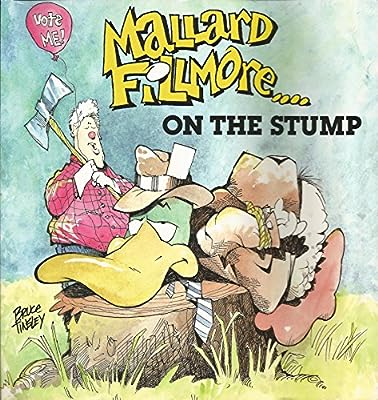 A collection of comic strips from the nationally syndicated series, which appears in more than three hundred newspapers, skewers liberals in government and the media, including President Clinton, expo ...

During the campaign it was striking that all of Trump’s references to books fell into a few categories:

On this basis, I came to the (not at all original) conclusion that Donald Trump probably hadn’t read a book in fifty years, not even those that bore his name.

Edited: when I commented earlier, I didn’t understand that one of the quotes was from an interview with Obama, which was cleared up in a reply to my comment by L_Mariachi, quoted below. Sorry about that confusion, and I’ve edited with a strikethrough appropriately.[quote=“L_Mariachi, post:32, topic:97216”]
The left image in that tweet was from an interview with Obama, to contrast how he talks about literature with how Trump does in the right image.
[/quote]

And then there’s this:

I paid … a lower percentage than somebody that’s working in a factory someplace. And that should not be

The only reason he paid a non-neglible amount of tax in 2005 is the Alternative Minimum Tax - basically a mechanism that looks at large reported gross incomes that are modified by losses and deductions to near-zero taxable income, and demands the filer pay a significant amount on the gross income. Trump has campaigned consistently on eliminating the AMT.

A competent interviewer with a soul would have known that, and skewered him on it. So I guess Tucker Carlson was never going to.

So wise! Maybe I can have a lucrative cabinet position as well. Well… I’m actually not very good at sucking up… and I don’t have any Russian connections… and I’m not a millionaire… So, I guess no position for me in the new Reich.

What are you talking about?! You’re unqualified. That means you’re perfect for the job in tRump’s whitehouse.