It’s not enough to be unqualified. You also have to be dedicated to undermining the mission of your cabinet department, and it helps if you’re a certified jackhole; see the latest example of this.

his use of language is for an American politician (or any American of his generation) very unusually not influenced by the language of the King James Bible, nor does he make references to popular biblical allegories or stories, even in speeches others have written.

meanwhile, in the King Donald’s Translation…

This approach can backfire on you, though.

Edited to add: this idea amuses me. I sense a comic here, along the lines of Trump puts his name in Mein Kampf and sticks it on the back of the john, then Spicer comes along and takes a dump and is like, “Ruh Roh.”

I’ve just come to the realisation that Trump may actually have a reading disability, or just poor literacy. This is exactly the sort of language Trump uses to cover his inadequacies (followed by a double-segue away from the topic of reading), and he has a documented preference for people to read things to him, rather than reading them for himself, including recent things like… executive orders.

“Getting the costs down… The costs of our country are out of control.”

You get what you pay for Donnie. I thought you were going to make the USA great again, a beautiful diamond-encrusted, gold-leaf covered democracy. Now you want a cheap, half-assed, bootleg democracy?

But you know, cutting military spending would be a good start, since the amount your budget increases it is almost as big as Russia’s total military spending. In fact the US spends more on the military than Russia and China combined. 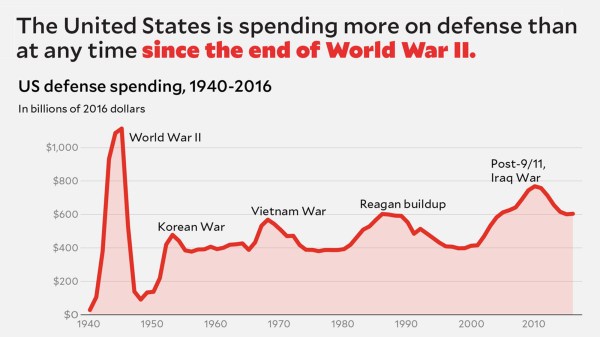 The Pentagon spends 69 times more than the EPA. Guess which one Trump wants to...

Yep, and it’s even worse than that. Americans live inside a giant de facto fortress, the massively armed seat of a voracious yet crumbling empire. It’s no wonder to me that most are scared by the thought of visiting somewhere else.

Obama: US spends more on military than next 8 nations combined

President Barack Obama defended American might in the face of attacks from critics who say the United States has become a weak player on the national stage.

According to Ivana,Donny’s bedtime reading is Hitler’s speeches. Donald Trump's ex-wife once said Trump kept a book of Hitler's speeches by his...

"If, I had these speeches, and I am not saying that I do, I would never read them."

My favorite - or “favorite” - version of this is the refrain from Republicans, especially Republican candidates for President, that we need a larger navy. It’s quite possible we need a very different navy, possibly including many more hulls, but the idea that we need a stronger navy is utterly ludicrous. We’ve got something like 80% of the world’s naval tonnage, all of its biggest and most capable aircraft carriers - and our closest allies have the majority of the world’s remaining naval tonnage!

Never know when a terrist might slip through while swimming onto our shores from the Middle East.

In fact the US spends more on the military than Russia and China combined.

It is actually FAR worse than that.

And here he is, in quite a departure from his previous behavior, claiming to have read Colson Whitehead’s The Underground Railroad - a harrowing series of allegories about slavery, race, and injustice. Needless to say, I assume he’s lying

The left image in that tweet was from an interview with Obama, to contrast how he talks about literature with how Trump does in the right image.

With the disclaimer that I only know what I’ve read, and am not in any way an expert:

The mere number of aircraft carriers doesn’t really convey the imbalance. The American carriers are a lot bigger than other countries’ carriers, carrying many more airplanes, and the American carriers launch their planes using steam catapults the others (mostly) don’t use, dramatically increasing the amount of fuel and munitions the plane can carry at launch. Also, the US has a number of smaller helicopter carriers it doesn’t call aircraft carriers, but that would qualify as such in most other navies.

I wasn’t trying to contradict you. If anything I thought the chart supported your point, albeit not specifically the 80% figure. It excludes all helicopter/VTOL carriers, by the way, regardless of what the navies call them.

I read the Washington post transcript of this interview (I also watched it live on fox) and nowhere in there does he say any of these things. Is this another case of fake news?

That’s a different interview, from tonight. The reading quote is from a previous Carlson interview. I’d link to it but I’m out of free WaPo articles for the month and I don’t know how to clear cookies on iOS. Anyone?

He’s currently reading ‘All Quiet On The Western Front’. It’s a very good book. I’ve watched it too.