Trump: a sticky dingleberry clinging to the desiccated racist hair on the white supremacist asscrack of the American body politic.

Defund the states that are funding the federal government?

Methinks Trump doesn’t realize how the money flows here. It’s a common failing for a man who declared bankruptcy 7 times.

Trump: a sticky dingleberry clinging to the desiccated racist hair on the white supremacist asscrack of the American body politic.

True. At least fecal matter is useful as fertilizer. But it has to know when to go.

(Not trying to be cute with the blurring. I genuinely realize some people don’t want to read revolting metaphors.)

All part of Putin’s plan to cause chaos in democratic strongholds in preparation for the upcoming election. He can then try to send in his “troops” (ICE, Homeland security, and Nazi militias like the buggering-loo boys) to “secure” the election (from democratic voters). Ideally (in his view) he can cause riots in all the places they were not happening previously, so that people are afraid to vote, and so that he can declare curfews to keep people away from the polls. Expect this sort of thing to expand to cities like Philadelphia, Columbus, Chicago… Anywhere that there’s a large urban (D) population in a largely rural ® state.

I expect there will also be a number of firebombings at post-offices in those areas as well. Blamed on the “D’s” of course. Because that’s the kind of thing that will happen if Biden was elected. Or something.

He can do this, actually. The Treasury is Executive branch. He can order the treasury just to stop paying out through an emergency executive order. The Treasury could refuse, but no one has refused him anything yet…

Is it legit? No, of course not. Can anyone stop him? Probably not. I mean, we have to face the fact that almost all of our enforcement capability in the US is executive branch. The Congress has their Sergeant-of-Arms, but their ability to arrest hasn’t been used in… I have no idea. It’s more of a parking and building security role.

Yeah. The senate’s full of a bunch of corrupt cowards.

Maybe those states should look into whether they can intercept taxes from businesses and individuals that are earmarked for the IRS in order to cover the shortfall. I mean, I’d change my withholdings in order to send some to the state instead of the Feds. I don’t want another cent going into the Orange Shitgibbon’s pocket.

TRUMP: “A person was on a plane, said there were about 6 people like that person, more or less, and what happened is the entire plane filled up with the looters, the anarchists, rioters, people looking for trouble. The person felt very uncomfortable on the plane.” pic.twitter.com/VP0idEzLNi 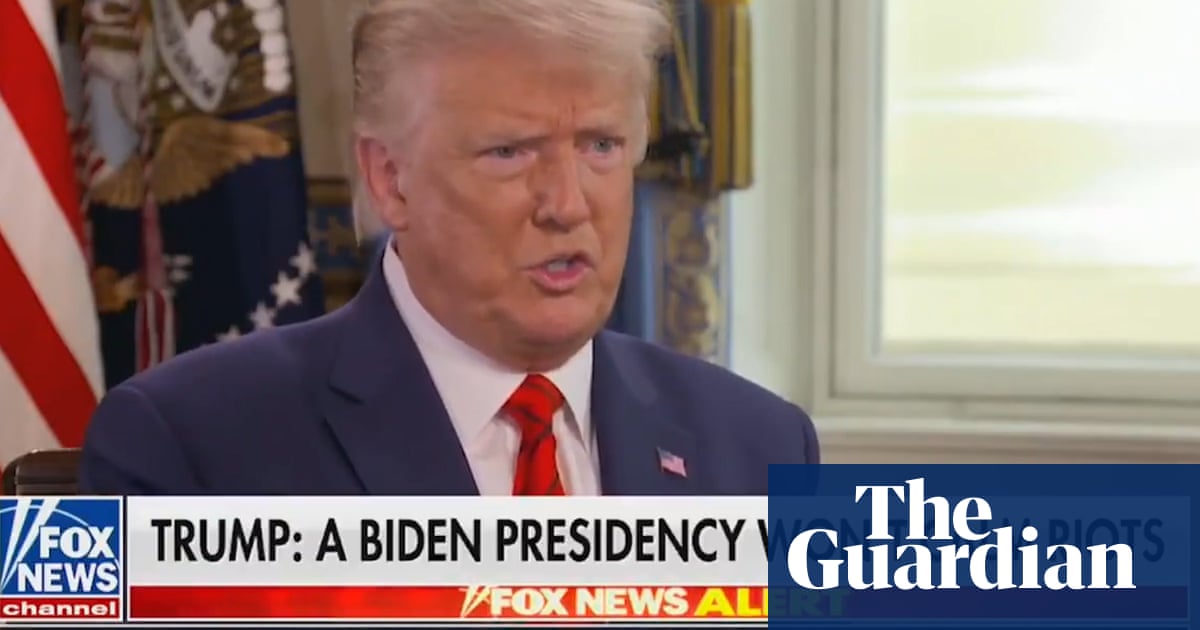 The conversation then took an even stranger turn. “We had somebody get on a plane from a certain city this weekend,” the president said. “And in the plane, it was almost completely loaded with thugs, wearing these dark uniforms, black uniforms, with gear and this and that.”

But he added that his witness, heading to the Republican national convention, had reported seeing “a lot of people were on the plane to do big damage”. Trump’s claim appeared baffling in the absence of further evidence.

PolitiFact - Black-clad thugs on a plane? What was Donald Trump talking about?

PolitiFact is a fact-checking website that rates the accuracy of claims by elected officials and others on its Truth-O-Meter.

NBC News reported similarities between Trump’s remarks and a months-old Facebook hoax in Idaho, that said members of Antifa had boarded a plane to the state to attack residential areas.

We’re seeing a lot of flaws in our system of government, never having had someone this openly evil in power before.

Narrator: Meanwhile trump offers the country nothing for the next four years and nobody seems to notice…

Every time he does this stupid shit it should go this way:

Reporter: Okay, so what’s the evidence, where did that happen?

Reporter: Okay, so the president is lying. Don’t bother listening, go ahead and roll the weather.

Take away that fuckwit’s power

nobody everyone but his fan club & enablers seems to notice…

U.S. House Democrats threatened on Thursday to hold Attorney General William Barr in "contempt of Congress" for not complying with a subpoena to hand over an unredacted version of the Mueller report. What does that mean?

The Supreme Court said in 1821 that Congress has “inherent authority” to arrest and detain recalcitrant witnesses.

In 1927, the high court said the Senate acted lawfully in sending its deputy sergeant-at-arms to Ohio to arrest and detain the brother of the then-attorney general, who had refused to testify about a bribery scheme known as the Teapot Dome scandal.

It has been almost a century since Congress exercised this arrest-and-detain authority, and the practice is unlikely to make a comeback, legal experts said.

Alternatively, Congress can ask the U.S. attorney for the District of Columbia, a federal prosecutor, to bring criminal charges against a witness who refuses to appear. There is a criminal law that specifically prohibits flouting a congressional subpoena.

But this option is also unlikely to be pursued, at least when it comes to subpoenas against executive branch officials, given that federal prosecutors are part of the branch’s Justice Department.

The Executive, if led by someone who simply does not give a shit, and with enough support to avoid being removed from office, seems to have unstoppable power. The other two branches have basically no enforcement capability against the Executive at all.

No, I’m saying increase withholdings. Then send the increased take-home to the state to cover the shortfall.

to the maximum extent permitted by law

“nor shall any State deprive any person of life, liberty, or property, without due process of law; nor deny to any person within its jurisdiction the equal protection of the laws.”

“…in reverse incorporation, the Equal Protection Clause of the Fourteenth Amendment has been held to apply to the federal government through the Due Process Clause located in the Fifth Amendment.”