Trump repeats claim that impeaching him will lead to civil war

The reason why they let that play out was because they were white, and the authorities have more sympathy for their views than other groups.

Let some Black nationalists (or anyone not White and male) try that shit, and watch what happens.

I’d mention what happened with the Black Panthers in Sacramento, but @gracchus already beat me to it.

Funny how quickly white American conservatives change their tune when black people try to avail themselves of those sacred Second Amendment rights.

Honestly, I’m more concerned with the law enforcement. It’s true that a white, armed protest isn’t immediately going to devolve into a stand off (for the reasons I said above), but there is no guarantee of safety going forward. A left wing militia would get much different treatment than a right wing one. Most LEOs who had militia connections it tended to be right wing connections.

That’s the easiest way for them to justify the use of force, honestly. Again, the history bears this out.

MOVE didn’t even go protest somewhere carrying guns. And didn’t take over government property. They were armed on their property.

Right? An city block GONE, because they made authorities uncomfortable.

Let some Black nationalists (or anyone not White and male) try that shit, and watch what happens.

Exactly. White supremacy must be maintained so that the capitalist system can be maintained. White, right wing groups are far less of a threat to that, and can far more easily be employed by the government to maintain both.

Arguably there already is an ongoing cold civil war.

These people aren’t threatening the Government- the executive is Donnie. They’re threatening “leftists” - other citizens that they disagree with - and who they’re saying they’ll kill if they don’t get their way. Calling for Civil war isn’t calling for a debate or having a chat over coffee.

the government went full tyranny on them, but they were labeled as extremists

they can label anybody an “extremist”

You guys are upset, and rightly so - but are you guys serious? You are discussing “the second civil war” as if it’s clear to happen, and contemplating if parts of the executive will be part of a coup? In what kind of failed state do you think you are living? You’ve got some cultural tensions alright, but have you ever left your otherwise culturally homogeneous surroundings for a place which is even remotely as complicated as a city dating back to Babylonian times? What the actual fuck are you talking about, “droning armed antifa”?
The US are not all hunky-dory, and you’ve got a serious mental gun issue in larger parts of the populace, resulting in probably more shot people than even some areas which do have civil war, I get that. But have you lost your marbles actually discussing a civil war like a self-fulfilling prophecy of the beardless baphomet orang in the so-called White House?

I haven’t been so angry about a BBbbs discussion in ages. Fuck me, I’m of to bed. Don’t @ me until I calmed down and you found your marbles again, if they haven’t been dissolved to CO2 in the acerbic and acidic societal discourse-imitating noise. For three fucks sake, vote the reality TV beedlebum out of office. And get your priorities straight again, cause we ain’t got time for that shitshow, and NOBODY in their right mind is going to start a civil war about asshat-inn-charge. Plus, the seriously ill assholes who would try to start a civil war are a minority even if a near-majority has been represented in the last vote for the wailing shitflinger. They belong in prison if they try, and trusting FUCK YEAH AMERICA there will be such an institution (albeit privatised) which will house them if necessary.

Shit, am I angry.
I should re-open my twitter account and rant a bit about how ranting is for loosers, even if they won the presidential election some years ago.

They’re threatening “leftists” - other citizens that they disagree with - and who they’re saying they’ll kill if they don’t get their way.

And they know that the current administration has their back.

are you guys serious ?

When the president of any country starts suggesting there will be a civil war if he/she doesn’t get their way, it’s reasonable to speculate how likely that is and if it does happen, how it would manifest. I think his civil war, if at all, will look like his inauguration crowed. A few lame wacko’s at best. But there is nothing wrong with discussion.

Shit, am I angry.

Try being a marginalized person who is legally a citizen of the US with all the supposed rights that come with that designation, and still being treated like a second class citizen for the entirety of your whole life… just because your skin is something other than White, and because you don’t have male genitalia. Try living everyday feeling as if you’re stuck in a trap that’s growing ever smaller by the day. Then try watching pretty much everything you’ve ever been taught turn out to be a lie.

You might be irate, but I really don’t think you want to get into that particular pissing contest, my friend.

I’ve been angry since EVER.

Literally none of us are arguing FOR a civil war. Most of us are angry that the current president is tweeting that this is a possibility. We, like everyone else on this planet, want to live a life where we can pursue our own personal happiness and not have to worry about violence.

. . . and you found your marbles again, if they haven’t been dissolved to CO2 in the acerbic and acidic societal discourse-imitating noise.

we’re discussing something the volatile and erratic man currently serving as president of the untied states said about his supporters starting a second civil war as if to coerce us to get back in line by threatening us with his armed and dangerous political base and you’re acting as if somehow we’re the ones threatening the country with armed rebellion. your anger makes sense but the target of your anger makes no sense whatsoever. the participants in this conversation are not threatening a new civil war nor are we arguing in favor of a new civil war. the source of this execrable concept is president trump.

i realize that it is rarely useful to simply gainsay someone else’s argument in an attempt to stop a fruitless proceeding but, seriously, stop acting like we’re demanding a civil war. attributing that to us is factually baseless and illogical to the extreme.

A civil war would have some options.

Charles I, or full Romanov?

It should read “our Fathers & Mothers”, but you gotta take what you can find in this World…

Yes, both my mom and dad served in the Army during WW II. And they would have vigorously opposed Trump’s abuses of the Constitution. 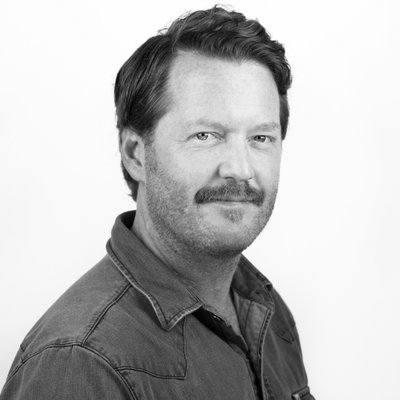 1/ While we’re talking about President Trump's Civil War jibes, we really need to talk about militias like the Oath Keepers and Three Percenters Specifically, their deep ties to American law enforcement revealnews.org/article/the-am…

@POTUS 7/ The communities most at risk from these groups are American Muslims, immigrants (especially non-English speaking) and people of color We’ve already seen the very fringes of the far-right attack these groups Every wild statement from @POTUS encourages attacks against them
12 Likes
CongenitalOptimist October 1, 2019, 1:10am #110

Six people nationwide will protest violently, but Herr Trump will paint that as the largest protests the United States has EVER seen. Period.

He’s said this crap before and I think he believes it. 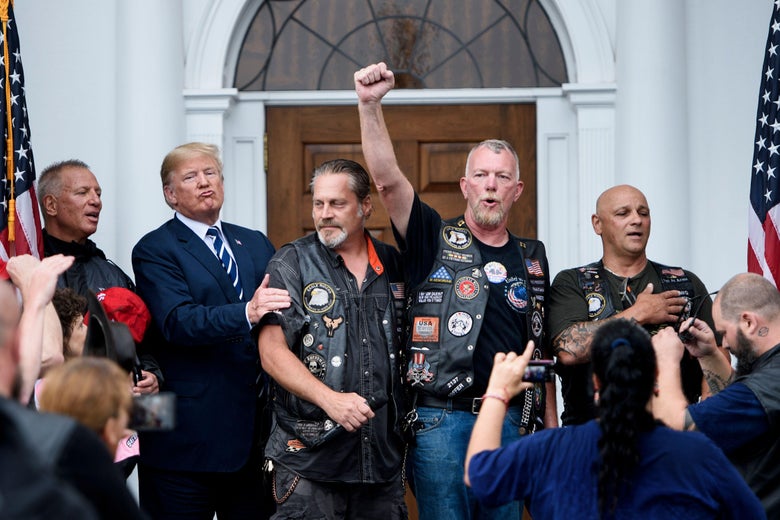 Trump Just Said His Friends in the Military, Police, and a Biker Group Might...

"They don’t play it tough — until they go to a certain point, and then it would be very bad, very bad,” the president said in an interview with Breitbart.

i spoke with some ex military friends about this. no, it won’t. he would be arrested. small bands might shoot off a bit, but they would be crushed. the military takes the whole line of succession thing fairly seriously. 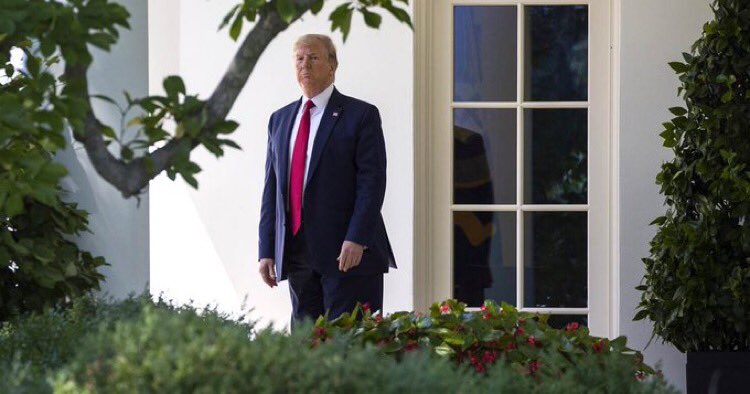 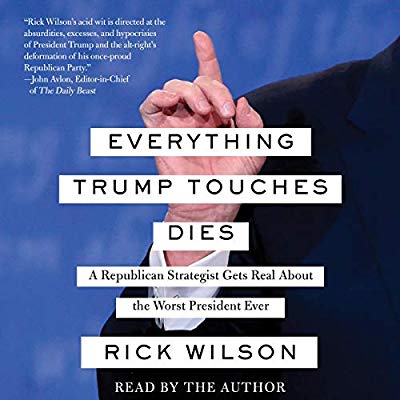 Includes a brand-new afterword read by the author!   A respected, longtime Republican strategist, ad maker, and contributor for The Daily Beast skewers the disease that is destroying the conservative ...

I hear you, but there will be violence. For some people who are really “out there” for Trump (you know who), this will be the ultimate affront. They will not think, they will just react. There will be family members who will be lost to each other forever. There will be intra-familial murder. There will be a redneck apocalypse. Wall Street is already threatening the Democrats if Warren is nominated. It will be system-wide.

The author above is a lapsed Republican on MSNBC almost every day (which is weird enough in itself). It’s a compelling argument for Trump’s survival-at-all-cost mindset. Nothing about our norms and expectations for safety is untouchable, at this point.