Trump repeats claim that impeaching him will lead to civil war

Probably not necessary. I doubt he can put up much of a fight if they just drag him out.

I can’t begin to fathom it.

It’ll be a bunch of gun luv’n neck beards in a cabin somewhere who plan to eventually have sex toys sent to them by “well wishers”.

This sort of logic baffles me. People are pissed off we are droning civilians in the middle east. You think everyone is going to be like, “Yeah, get 'em guys! Drone those bastards!” Will anyone with that opinion have that opinion if it was, say, Trump droning armed Antifa?

Almost no one wants a civil war. And if there is one, thinking that all of the armed forces will be on one side would be the height of naivety. And anyone who thinks a militia force with only small arms isn’t a viable threat, hasn’t read about the war in the last 10 years. Oh sure, we win, but at what cost? We “won” Fallujah, but destroyed the city, killed civilians who couldn’t get out/were used as shields, and the insurgent movement lived on.

Personally I wouldn’t be so boastful of US military might in a civil war, because odds are that might will be used against you. But like I said - almost no one wants it. We need to ratchet the rhetoric down, not up.

Even if the Senate finds him guilty of violating laws, Trump would still blame the Dems… and forget the role of the GOP in the ruling.

We need to ratchet the rhetoric down, not up.

Lincoln’s attitude: We must have a Civil War to save the Republic, even if it kills me.

Trump’s attitude: We must have a Civil War to save me, even if it kills the Republic.

I think there are very much people who would love to see this happen.

Almost no one wants a civil war.

But there are enough people who do to make it a very real issue we need to be thinking about. It’s nowhere near a majority of the GOP or conservatives, or people on the left, but it is a enough to give pause, I think. And the more Fox News whips up the right wing base, the worse it’s going to get.

We need to ratchet the rhetoric down

Maybe tell that to the President?

You misunderstand me. I am personally very much opposed to a great deal of US foreign policy in general, and drone strikes in particular. I am also very much of the opinion that the US needs to cut its military budget by about 90% and maybe take care of its people instead. It will still be the most powerful military in the world.

I do not want nor would I look forward to drones being used against civilians, in or outside the US. As a non-US citizen my life is forfeit if a midlevel officer somewhere decides to label me a terrorist or other threat. Unlikely in Canada, but as a non US citizen I am non-human in the logic of US foreign relations and military action, so it is at least potentially on the table. My grandfather was in the IRA - a slightly different timeline and it could have been my wedding getting droned from the skies.

I was merely mocking the absurdity of the ammosexual belief that their collection of bang bang toys is somehow going to protect them from a tyrannical government. A real tyranny would just vaporize them from the air - in that it would move its own citizens into the same category that your government has already placed all us non-US citizens. And all their fantasies about civil war and a Yeehaw’d uprising would rapidly disintegrate in death and tears.

Given the choice I’d much prefer you guys refurbish your law enforcement systems to something with a higher baseline than armed thugs killing people without consequence while ignoring white collar crime, and then turn that new professionalized version of the law against the lunatics with delusions of liberty through the slaughter of innocents. 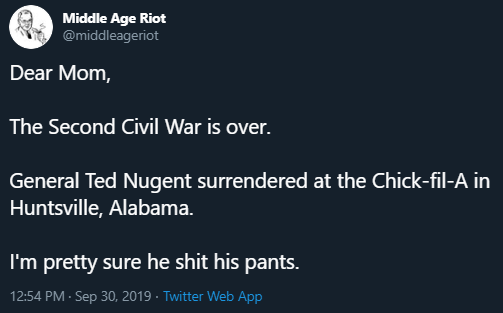 That is very true, but it could be said for pretty much any state. Urban areas trend blue, rural areas red. Population density tracks voting tendencies very tightly. Hence the famous map with blue islands in a sea of red.

As some other people have pointed out before me (possibly even on this website) the second US civil war will more likely resemble the Troubles than a war between two opposing armies. Think more truck-bombs and even more mass shootings as opposed to what happened last time. Assymetric warfare.

And (as @Melz2 points out), the MAGA chucklefucks have already proven their willingness to engage in that kind of behavior. Their mentality is that there are no civilians – except on their side – so if you’re just trying to live your life – especially if you belong to a minority group – you are an enemy combatant, and therefore fair game.

And then there’s the really dangerous ones, the rich fuckers who will be looking for a way to profit, and encourage things to get worse.

I am not saying it’s hopeless. I am saying don’t underestimate who you’re dealing with.

Hell, you have no rights in the US according to these folks in Mississippi. 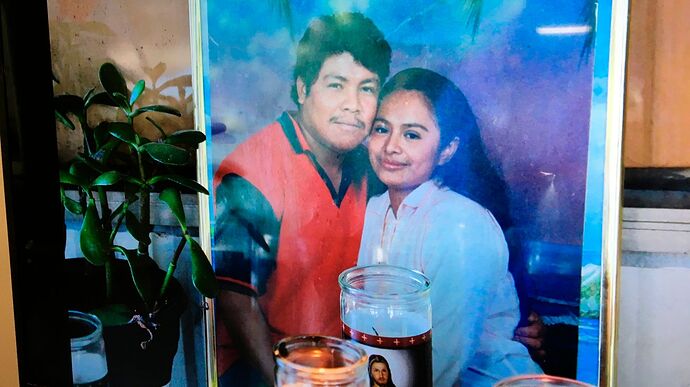 Cops At Wrong House Kill Undocumented Man, City Claims He Had No...

Police in Southaven, Mississippi, killed Ismael Lopez, an undocumented man, in 2017 after going to the wrong address.

And to avoid actual confusion:

Constitutional rights are not strictly limited to citizens, many apply to any person in US jurisdiction, whatever their nationality.

Probably not necessary. I doubt he can put up much of a fight if they just drag him out.

NO SHIT. Ever seen your average Secret Service dude?

You’re right that if the government went “full tyranny” they wouldn’t be much of a match. But that ignores the fact that there are various levels of armed protest that doesn’t end with direct force on force conflict. They have to deal with them in a way that isn’t tyrannical lest the rest of the population begins to protest as well. You’re mentioned the worst case scenario, when there are many other ways such things can play out.

Who doesn’t get tear gassed and kettled? Armed protestors. To say that arms don’t have any effect in the political power dynamic between the government and the people, or that the the power is so lop sided it doesn’t matter, means that one is just ignoring historical examples.

Today’s examples are mostly right wing, but in the 60s there were several left wing armed protests. In some cases the government went full tyranny on them, but they were labeled as extremists.

In the 90s they tried that again and the public backlash resulted in the FBI revising how they handle armed protests and stand offs.

The Bundy Ranch and the Oregon Wildlife centers are two examples where armed protest gave the government pause. It sucks such examples are for such piss poor causes, but they still are examples of armed protest being a factor in the power dynamic.

When one considers more than one worst case scenario, the concept is a little less absurd.

Armed protest is threatening your political opponents with violence- it’s a trial balloon for real violence. It doesn’t even have plausible deniability.

I am not saying it’s hopeless. I am saying don’t underestimate who you’re dealing with.

The Bundy Ranch and the Oregon Wildlife centers are two examples where armed protest gave the government pause.

The reason why they let that play out was because they were white, and the authorities have more sympathy for their views than other groups. They don’t want the optics from Ruby Ridge and Waco again. When the anarchists group MOVE was involved in a stand off with the police, they literally dropped a bomb on them in 1985 in the middle of a major American city, burning down the entire block:

MOVE is a black liberation group founded in 1972 in Philadelphia, Pennsylvania by John Africa (born Vincent Leaphart) and Donald Glassey, a social worker from the University of Pennsylvania. The name is not an acronym. The group lived in a communal setting in West Philadelphia, abiding by philosophies of anarcho-primitivism. The group combined revolutionary ideology, similar to that of the Black Panthers, with work for animal rights. The group is particularly known for two major conflicts with t...

Right wing extremist are far more acceptable than left wing or POC’s militancy. Those will and have been dealt with far more harshly and violently. It’s the Kirkpatrick doctrine in miniature.

Funny how quickly white American conservatives change their tune when black people try to avail themselves of those sacred Second Amendment rights. Even funnier how ammosexuals are completely blind to that history.

The Mulford Act was a 1967 California bill that repealed a law allowing public carrying of loaded firearms. Named after Republican assemblyman Don Mulford, the bill was crafted in response to members of the Black Panther Party who were conducting armed patrols of Oakland neighborhoods while they were conducting what would later be termed copwatching. They garnered national attention after the Black Panthers marched bearing arms upon the California State Capitol to protest the bill. Assembly Bill...

The Bundy Ranch and the Oregon Wildlife centers are two examples where armed protest gave the government pause.

If people want to do it the wrong way, they can do it as you suggest. Domestic terror-seeking violence and threats of starting a civil war also “give a government pause”. Because preventing shit like that is usually “the point” of most of our social contract.

It doesn’t sound like something that should be encouraged as a tactic, when there are other ways to “give a government pause” without threatening violence to bystanders.

Governments don’t fear armed rebellion, not on an existential level. Tooling up against a basically functional government will leave you looking like an arsehole, and you will lose. Bad.

Governments do fear peaceful rebellion, because peaceful actually works. It worked for India, it worked for East Germany, it worked for the Baltic States, and it’s working in Hong Kong. Neither imperial Britain, the GDR, the CCCP, nor China are widely known for their squeamishness, but they were all undone by sustained peaceful protest. Of course, it’s a slow process, getting beaten and gassed really fucking hurts, and there’s a good chance that the security forces will kill some of you, which is why endurance and courage is demanded.

So, if you oppose the government, put your stupid fucking Rambo fantasy down and pick up a book to find out what actually works. Hint: it ain’t the objects of your fetish.