What the hell ever happened to the tie-tacks?

that’s how i took it, too. he’s worried that Comey taped it, and can prove that he never told trump anything about him being investigated or not. it’s a threat.

What the hell ever happened to the tie-tacks?

When you got a tie that long, you flaunt it.

Hanging out with Kissinger, firing people who investigate him, and talk of tapes. Let’s keep the deja vu ball rolling and impeach this sucker. 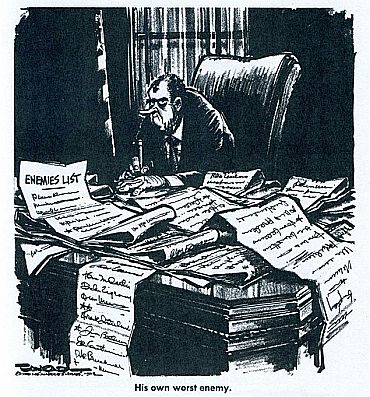 Threat of tapes? I hope Comey has the guts to say “Bring it on, asshole! Bring. It. On.”

This is definitely the kind of thing Trump would say after spending an afternoon hanging out with Kissinger.

But Trump must have his own equivalent since Henry K is past it.

Reputable and stable Western banks? Like Lehmann Bros and RBOS?

For Western banks to stop a property developer from taking out loans would normally suggest a level of smell that would make “scam” seem quite ethical in comparison.

Kissinger is the new Kissinger 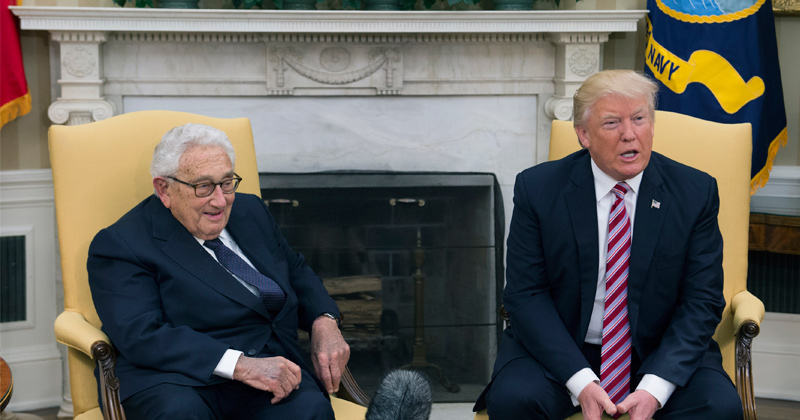 Kissinger is the new Kissinger

There came a point in the early 2000s where only the only Western banks left that would loan him money were Deutsche Bank (which has serious internal problems) and Wells Fargo (no further details required there). At that point, most people in the NYC financial services industry were very aware of what kind of businessman he is.

Alternate theory: He’s worried about something he might have said that he doesn’t remember saying.

Does Trump know that he is threatening the entirety of the FBI ?

Law #19: Know Who You’re Dealing with – Do Not Offend the Wrong Person

Trump tapes, meet subpoena. I hope you have a wonderful evening.

his company started borrowing “bigly” from Russian banks after reputable and stable Western ones stopped lending him money for his scams. Whether he truly grasps how Putin could take advantage of that situation to get Manafort, Page, Flynn, etc. into his campaign and administration is another matter.

The Moscow Project has a video on their front page that presents an overview of Russian ties beginning with these bank loans. Not necessarily new or very detailed info, but a good synopsis.

Not sure how to embed properly, so here’s the link: 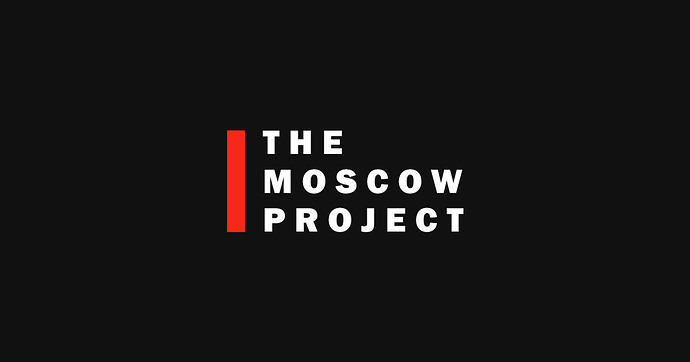 Investigating Trump’s involvement in Russian attacks on our Democracy.

I really don’t read it as implying that Trump has tapes, just that some part of the modern surveillance state might. At a deeper level, only in Trumps imagination could a recording of a conversation with him in it could come out making the other person sound worse than trump.

This was my immediate response: there is no way Trump tapes his conversations because Trump doesn’t want the things he says to be on record.

This was my immediate response: there is no way Trump tapes his conversations because Trump doesn’t want the things he says to be on record.

I actually don’t think he cares. He has gotten away with lying and ignoring any promises or statements that he has made so often that he just doesn’t think that the past matters in any real way. People laughed about the idea of post-reality based policies in the Bush administration, but Trump has doubled down so hard on that he doesn’t even articulate the idea that objective reality doesn’t matter. He just ignores it entirely.

Obviously part of Trump’s problem here is that his administration has given multiple accounts of what happened (either his advisors pointed this out to him, or more likely he saw it mentioned on TV), which explains the whole “no more press conferences, we’ll just put it in writing from now on” bullshit he also tweeted.

...Maybe the best thing to do would be to cancel all future "press briefings" and hand out written responses for the sake of accuracy???

I just don’t have the will to go see what kind of excuses they’re pitching on right-wing blogs, but I know they must be finding some way to justify this crap.

And I’m guessing he thinks if he keeps tweeting this idea, it will make the Russian investigation just go away:

Again, the story that there was collusion between the Russians & Trump campaign was fabricated by Dems as an excuse for losing the election.
6 Likes
Shuck May 12, 2017, 3:12pm #40

Gods, it’s true - Trump is 100% about reacting to the moment, making sure to assert his dominance and get rid of the things he’s seeing on television that annoy him (in this case, presumably a lot of television speculation about what Comey might still say). No strategy and no one to stop him at three in the morning.

He must be really deep in shit on Russia to get that defensive.

I don’t even think that’s necessary - he just reacts to things he sees on the news at that moment that challenge his authority or annoy him in any way. Whatever his involvement in the Russia thing, he probably doesn’t think or worry about it - he honestly doesn’t understand why everyone is making a big deal about it, and it’s annoying him he can’t make them stop and lashes out.

An FBI director with tapes?

I had been thinking that Comey would have been crazy to have private conversations with Trump without recording him.