Trump tweets about recent Iranian missile launch, then US assessment deems it false

I don’t think he could have received an intelligence briefing — this would imply he has some form of intelligence.

I assume that anything that Trummp says… is false.

It doesn’t matter, the trumpanzees have received the Holy Tweet.

Edit: Was Holy Twit. Tweet is clearer, but Twit works just as well.

It was brief, very brief. The briefest.

A must read on why he does this crap: 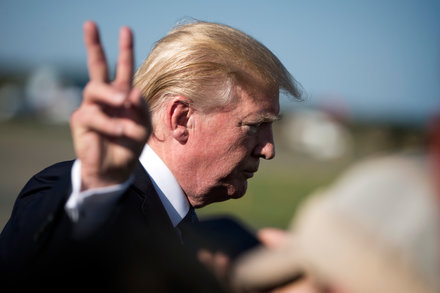 Opinion | The Abbie Hoffman of the Right: Donald Trump

Trump is winning at shredding the dominant American culture.

This is quickly becoming my default question for any “Trump just tweeted” news:

What story was being told on FoxNews about 20 - 30 minutes before his tweet?

Nice description…trumpanzees…Good visual image of a bunch of dullards slumping around like chimps in suits picking stuff out of their ass and proclaiming it to be fresh nuggets of wisdom.

What do you think are the odds he will back down/admit he was wrong? (Oh dear, I do crack myself up).

Guess which of the two things shown is Trump; the dung (tweets) or the beetle.

25th amendment please. This guy is more then a half a bubble off.

This is getting (“getting”?!) seriously troubling.

I don’t think he could have received an intelligence briefing

an intelligent briefing, yes, he is due one of those.

WTF will it take for his base to acknowledge his lies?

This is getting (“getting”?!) seriously troubling.

25th amendment please. This guy is more then a half a bubble off.

WTF will it take for his base to acknowledge his lies?

Trump is not going away until the non-fascist 2/3rds of the USA take to the streets to make him go away. A fascist party will not impeach a fascist President.

And it isn’t about one man; Trump is just the tip of the pustule. The entire GOP needs to be removed from power, at all levels of government. Their ideology is not compatible with a sustainable society.

A revolution is required. There is still an opportunity to make it a peaceful one.

The people of Korea, Iran, Puerto Rico, St Louis…they cannot wait for America to once again demonstrate that the USA is not a genuine democratic state. People are dying, and millions are under threat.