It exists in his head…

Right. Now cue the masses of supporters/pundits saying, “Well, obviously he meant the xyz law, which applies. If you look at it through a prism.”

If someone totals you poor man’s Mercedes, you call Geico - you don’t set fire to the Constitution.

He was being sarcastic. /s

I sometimes wonder if he thinks that simply saying something as president makes it real. Like, does he think he can just tweet a new law and it pops into existence? Or is his thinking some fuzzy idea that he decides how law is interpreted and this is a form of memo? While trying to figure out the methods of some people’s thinking is difficult and tiring I could do this all day… it’s just reductive stupidity.

Well, it doesn’t not NOT exist, right?

I sometimes wonder if he thinks that simply saying something as president makes it real. Like, does he think he can just tweet a new law and it pops into existence?

I don’t wonder. I think that is what he believes

Every day, several times a day really, I mumble to myself, “what an asshole.” 99 days. Can we just make it 99 days…

Unfortunately, so does Barr and John Yoo.

I sometimes wonder if he thinks that simply saying something as president makes it real.

That is the basis of his entire “the emperor has no clothes” existence. If you repeat a lie often enough, it becomes accepted as truth.

I sometimes wonder if he thinks that simply saying something as president makes it real.

You can remove “as president” and that’s still true. That’s what he’s spent his entire life doing. And it has, on the whole, worked for him.

178 days - Assuming he leaves without burning the place down. It’s those days between 99 and 178 that I worry about the most.

and 1.2 million raised by a single bail fund so far. i’m sure if portland’s city council agreed to cut police funding by 50% over the next x years while ramping up community programs – people would be happy to chip in to cover the damage, and chip in to do the labor. 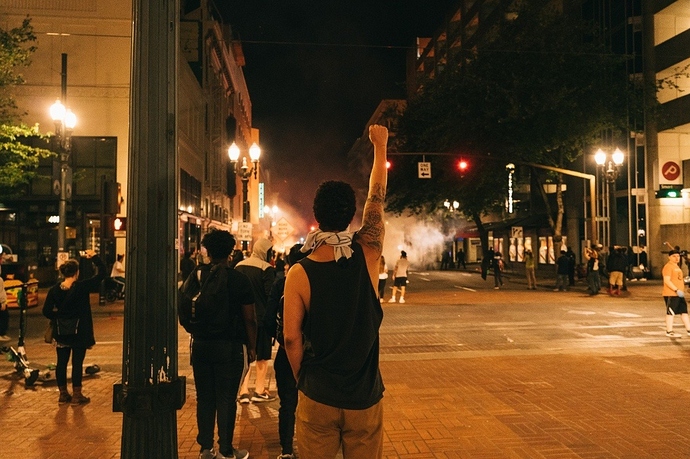 you don’t set fire to the Constitution.

unless you’ve been looking for an excuse to do so since day 1.

will be prosecuted under our recently re-enacted Statues & Monuments Act. MINIMUM TEN YEARS IN PRISON.

His followers do love re-enacting.

Everybody should know by now that the pigs are allowed to lie about what the law is (and pretty much everything else), right?