He wanted to prove he’s good at being a statesman.

I had a taco salad, what more do you guys want?

##Trump’s visit, and Peña Nieto’s failure to hold Trump accountable for his racist comments about Mexican people, were widely protested in Mexico.

I guess the Peña just wanted to say it in person: 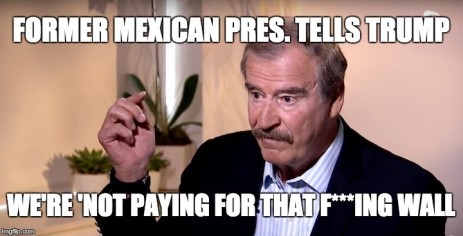 The entire notion of putting up a wall is fucking ridiculous. How anyone can look at the idea and not immediately dismiss it is amazing to me. It’s 2000 miles. I have no doubt that we could pull it off if necessary, but at what cost? And it would be deeply unsuccessful. And on top of the expense to build it, we would have to spend additional money to maintain it and staff it with border patrol. And that’s not taking into account that this is an idea that is so frequently supported by people in favor of free trade (though, admittedly, Trump’s ideas on free trade are more nuanced).

I guess my point here is that supporting a wall is one of the clearest possible signs that you are an absolute fucking idiot whose ideas should be completely disregarded.

What the fuck is it with republicans and walls…

It’s like they need to build them just so they can re-enact Regan’s ‘tear down this wall’ moment. We won the cold war by getting walls torn down - nation of freedom and all that.

The baby boomers can’t seem to be happy unless we have wars to fight and the threat of annihilation - get over it you will never be even as good as your parents - even if we had another world war you are all too old to be great at it - deal with life and move on.

One unburdened by diplomacy or reality, one so blindingly obvious it needn’t even be uttered.

Interesting to see where “negotiations” go from here.

than you can throw him.

It would have been good if they had arranged it so Trump had to get in and out of the building through a huge angry mob, protected by a phalanx of goons. Don’t you love scenes like that? Maybe it would have impressed on him that words have consequences. Maybe he only would have seen a bunch of crazy beaners.

Peña Nieto had earlier extended an invitation to both presidential candidates

Presumably Ms Clinton will go to Mexico some time in the first half of next year.

"It is unsurprising that they hold two different views on this issue,

It’s amazing how often that happens when Trump is involved.

and we look forward to continuing the conversation."

Good luck with that!