Number 12 is probably why

(I try to tell myself that it’s mostly visibility bias - decent governments that cede power peacefully don’t get the news coverage.)

The slave begins by demanding justice and ends by wanting to wear a crown.

These words are constantly in my head, they are why I fear having power over people.

Turkey didn’t block Wikipedia. Wikipedia just wandered off into the desert one day. No-one knows why.

Nice. Throw in a few book burnings, will you? European colonization of the Americas Ethnic cleansing in the Soviet Union The Armenian Genocide (Armenian: Հայոց ցեղասպանություն,[note 3] Hayots tseghaspanutyun), also known as the Armenian Holocaust, was the Ottoman government's systematic extermination of 1.5 million Armenians,[note 2] mostly citizens within the Ottoman Empire and its successor state, the Republic of Turkey. The starting date is conventionally held to be 24 April 1915, the day that Ottoman authorities rounded up, arrested, and...

Erdogan’s efforts are directed towards an enfranchisement policy of “One Person, One Vote.”

However, he esoterically interprets it to mean he’s the one person to get a vote.

The slave begins by demanding justice and ends by wanting to wear a crown.
-Albert Camus

I’m not sure how many of them even have to go through the transformation that ‘end up’ suggests; though there are certainly some naive do-gooders who learn the hard way that things can get out of hand so very quickly.

More than a few who view the existence of the heap as inevitable(or even desirable); just think that it’s time for their people to have a shot at the top. Plus, unless you are a particularly tolerant sort of pluralist; it’s not at all uncommon to interpret “outsiders can just disrespect us and our sacred cows with impunity!” being one of the unpleasant side effects of social powerlessness to imply that success will include putting a stop to that; by force if necessary.

When you are lucky enough to have a leader who embodies The General Will, any additional polling activity just creates the harrowing risk that the votes of the people will interfere with the policies they truly want.

Really, how could any decent person trust the sort of deracinated technocrat who would substitute abstruse statistical grovelling over boxes of multiple choice tests for an authentic, organic, understanding of a people and nation’s unique historical and social character?

ughhhh Turkish politics is a fucking mess don’t remind me
my mom and my brother were watching a movie about Kurdish refugees last night and it didn’t have subtitles so my mom asks my dad to come in and translate (he is part Kurdish and knows some from his parents)
dad: Well if it’s a PKK movie it’s full of lies-
mom: SHUT UP ABOUT POLITICS AND WATCH THE DAMN MOVIE

I’m not gonna defend the PKK so I didn’t want to say anything but I think he hates them for the wrong reasons and he defends Erdogan a lot too (e.g. "people are exaggerating this whole ‘tear gas’ thing) so I was just 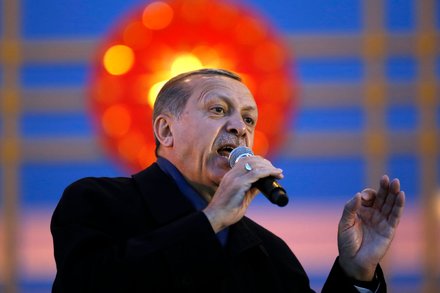 A phone call between the two leaders did not mention concerns that the referendum in Turkey would erode the country’s democratic institutions.

It’s interesting that Erdogan rode this train to domination on the back of a religious party that was a counterreaction to the secular, albeit somewhat authoritarian, state.

Then the “Deep State” itself reacted and tried to purge him (doing the right thing, the wrong way) and were unsuccessful.

And now, here he is, Turkey’s Franco, the beneficiary of a legal coup. Arguably, Turkey is now in a much worse place with him at the helm, than if the military had been successful in the 2016 coup attempt. [It’s very curious that we still don’t know who sponsored the attempt-- it certainly wasn’t Gulen.]

Nr 6 made me laugh.
Nr 5 seems perfectly reasonable. And funny.

Upvoted for sharing the weirdness; would have enjoyed it more if it hadn’t been a vertical video. Stop V V S !