Its wrong how much 13 year old me LOVED this song and video. Despite being super heavily into Valley Girl-ism. Bag your face!

My memories of high school just became that much more awkward. Middle age had nearly purged my brain of my metal-head past, but now they’re back. Argh!

As long as you sold or tossed those Winger albums, you’re fine.

Dee Snider was on an the Humble and Fred Show a couple months ago… It was a super fascinating interview. He told the story about how the Christmas song he wrote for Celine Dion paid for his house.

One of my favorite HR Dept toons.

I think this might have been one of the first videos I saw on MTV. I’ve never been much of a fan, but I really liked his book for surviving teenhood when I was going through all that. 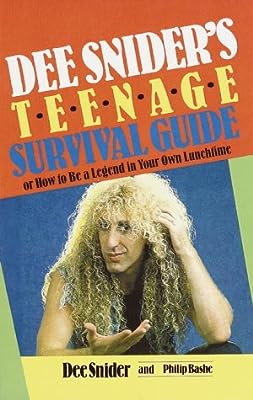 Gives advice to teenagers on a variety of topics including friendship, self-esteem, parents, sex, pregnancy, and abortion

I remember hearing a story about Dee Snider attempting a stage dive but everyone moved and let him hit the floor.

He told the story on Letterman back in 1987 (Dave’s line of questioning about hecklers - he was stage diving to chase after a heckler that threw a bottle at him - starts at about 1:37):

(PS - isn’t the internet awesome? Took me less than 5 minutes to find that)

Fuck yes. My band definitely used to play this (at about 30-50% higher tempo, because that’s what we did).

I’m partial to this version, myself. In fact, it might be the only version I was familiar with until just now.

Is that short brown hair that keeps peeking out from under a blonde wig?

I can clearly remember back in 85 or so, thinking he was the ugliest woman I’d ever seen.

Dee Snyder lives in the next town over. He has a reputation locally as a good guy.

my mom bought me this.

not sure it helped me “survive” my teens, but it was an entertaining read. going by the stories contained, the actor in the video is a stand-in for Snyder’s own jerk of a dad.

@Boundegar, he jokes in the book that all that stage costumery was just trying to cover up how ugly of a dude he is.

Sounds like a stand up bit I heard once regarding the difference between rap concerts and rock concerts.

I made jokes about him too when TS flourished. But actually the real Mr. Snyder was & is, not a bad looking guy - great musician/actor too. Additionally, he voted for Obama & is a public supporter of womens’ right to choose.

The above info was retrieved from WikiP a few moments… go here’s the link:

Daniel "Dee" Snider (born March 15, 1955) is an American singer-songwriter, musician, radio personality, and actor. Snider came to prominence in the early 1980s as lead singer and songwriter of the heavy metal band Twisted Sister. He was ranked 83 in the Hit Parader's Top 100 Metal Vocalists of All Time. Born in Astoria, Queens, New York, Snider grew up in nearby Baldwin, Long Island, and graduated from Baldwin Senior High School in 1973. His father, Bob, is a retired New York State Trooper an...

I read these factoids years ago. Also, years ago, I read an article or interview that said he and another TS member had some background in classical music as youths – I can’t find the time to find the reference right now - I did look for about a minute tho.

.
Here’s a brief bio on Mr. Snyder on allmusic. There are others - but this looks good enuf for a quick comment:

I wasn’t a TS teen-fanboy in the '80s - for me, TS was too kid-teen friendly to keep my teen-delinquent attention. I do remember thinking they were pretty good musicians who selected a target audience, had a rapport with that audience - and made a nice living for their efforts.

This is the Trump campaign’s theme song, played at all their public events. Snyder has supposedly donated a free license so the campaign doesn’t have to pay royalties even for events at non-licensed venues. I’m kind of surprised to see this endorsement of a Trump-led revival on Boing Boing