Gonna need a biohazard suit to go in there.

What a petty tyrant.

how are roombas at emptying trash cans and cleaning toilets? Christ, elon is the world’s pre-eminent asshole and that is really saying something these days.

Twitter only leases three floors of the building. Wouldn’t they be required to have cleaners as part of the lease, and who has the contract for the rest of the building (i.e. the union)?

Looks like Musk is using Restaurant Management styles at Twitter now.
Anyone else work in a Restaurant and hear “IF YOU’RE NOT BUSY, CLEAN SOMETHING!”

Gonna need a biohazard suit to go in there.

Seriously. Techbros aren’t known for their good hygiene under the best of circumstances.

Imagine how disengaged from reality you’d have to be to think this is remotely feasible. The complete ignorance of how “cleaning” works, what “cleaning” entails.

From the beginning of his life in S. Africa, I doubt he ever considered how that work was done. Cleaning is something that “just happens” when you throw money at a problem, and is not worth further consideration.

The whole Technocracy movement his family was involved him let him go the extra step toward imagining that the right engineer could completely replace that pesky human “domestic help” with robots.

Like I said in a different thread. It’s gonna get real gross, real quick over there.

And roaches, mice, rats, and with shared sleeping spaces, bedbugs.

Wouldn’t they be required to have cleaners as part of the lease, and who has the contract for the rest of the building (i.e. the union)?

Yes, and in fact the cleaning staff are usually supplied by the building and your lease includes paying into that service (along with trash removal and other things that aren’t metered per-tenant).

It’s surprising that he could even do that, but I believe their union is now suing.

Which is true, to a large extent. Most people don’t realize how much automation is going to replace a lot of jobs, very soon. Elon Musk is one of the people who understand that. The reality is, anyone who is in those jobs needs to start working on new skills.

Elon Musk certainly is brutal in his pursuit of efficiency. That doesn’t win many friends, but does result in… efficiency.

Musk apologists are taking to social media to proclaim that living at a filthy office is just the way the tech industry normally works.

I mean, maybe if it’s a couple 20something coders trying to get their new startup off the ground, but for an established company theoretically worth tens of billions of dollars? Freaking delusional.

their jobs would be replaced by robots

Which is true, to a large extent.

It is incredible how much willful ignorance some techbros have of the world outside their narrow specialty.

Heck, anyone who cleans their own home on a regular basis without paying someone to do it knows that robots can only do so much.

It is incredible how much willful ignorance some techbros have of the world outside their narrow specialty.

It’s another of that group’s affinity points with Libertarianism. 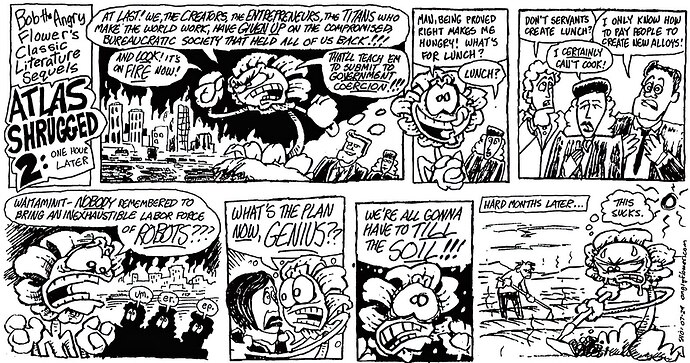 And even the cleaning tasks robots can perform often don’t save that much human effort because somebody’s gotta empty out the robots and whatnot.

And the costs involved. Cleaning robots are expensive.

By the time you have all the robots required to clean your house properly you’ve spent a fortune. The Jetsons set unreasonable expectations.

That Tesla robot can’t even walk on its own. It’s not even full self walking.

Never mind cleaning a room and knowing where you want to put things away or making a decent martini.