Using card tricks to find the truth about Trump

Well, this has certainly changed my vote. And I’m guessing it’s changed many others here on boingboing.com

it’s a Trump suit cause it looks cheap and ill-fitting.

The winning bid in this game is one no trump.

Seems to be a trend…

This reminds me of a discussion I had with a Trump supporter I know.
They were far more inclined to believe the lies Trump tells than the ‘facts’. Particularly the 90 million unemployed number. “But… that still leaves at least 30 million people, those people don’t just not exist,” “It was a lie,” “No,” “I’m just telling you the numbers,” “Your numbers are wrong,” I dropped it after that and switched to another issue 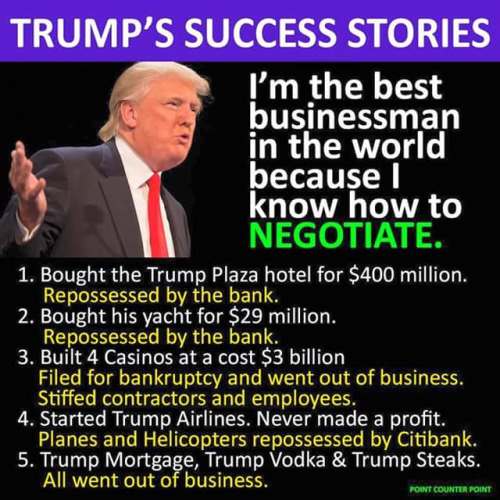 Yes, but he always made a profit!

Wow. So it only took a simple card trick to “destroy” Donald Trump.

Well, we can all rest easier now.

There are those of us who know folk who favor Trump. They don’t read Boing Boing.

They read ‘honest’ news like Breitbart. And they listen to ‘truthful’ commentators on Fox News

Anyone know why Penn’s got one nail painted?

As far as Trump, Clinton or any other politician in the world today, that lies and deception are a prerequisite for the job.

Anyone know why Penn’s got one nail painted? Speculation arises from Jillette's red fingernail on his left hand. From the FAQ from Penn & Teller's official website, there are three common answers:

So I guess we know he’s voting for Gary Johnson.

If our (ex) friends and family members who are voting for Trump aren’t put off already by his open racism and casual disregard for facts, they’re going to have a pre-existing resistance to a video ‘[blah] destroys trump with [bleh]’. This videos have an intended audience of people who already dislike trump.

The card tricks are done well but the conceit behind the video is boring.

Trump voters KNOW he’s full of crap and don’t care. They respond to the emotional draw of regaining privilege - of being great again, of cashing in the promises of unearned reward for where and how they were born. I have no idea how one addresses that in video form, but I doubt it involves card tricks.

Nnnnot every experience is universal. I’d also say the validity of the conceit (which I kind of enjoyed; firmly roots the trick as an outgrowth of storytelling), is largely subjective.