Everything about this video is depressing.

If the video is staged (which it most likely is) it’s just unfunny, far from clever, lazy, and offensive in all the worst ways a comedian can be. I don’t mind a comedian being offensive and pushing the boundaries of what the audience will laugh at, but this is just a poor excuse of a bit. Fuck this guy.

Ugh, what a moran. Why is this bit of shite coming back to haunt us again?

EIDMAN:Yeah, I can see that. But, in my mind, even the glasses are just so comical looking that it’s like I don’t know how people can watch it and not see I’m doing a joke.

I am so tired of these idiots not understanding that we get that it’s a joke, it’s just that we don’t care because being racist while being funny (let’s pretend for a moment that there was funny here) is still fucking well being racist.

Right, this kind of crap has been going on for a looooong time.

I am so glad I have this little voice that sometimes whispers, “no, that joke is not funny. STFU.” I usually listen. Not always, but I’m getting better.

Ugh, what a moran. Why is this bit of shite coming back to haunt us again?

Erin Moran would not have appreciated that.

Is that better? I don’t know. I always gave it a pass, even though it made me cringe a bit.

Or Caitlin Moran (for the more UK-centric Moran spotter)

(Not that I can tell whether or not you know that. My apologies to all Morans.)

Is that better? I don’t know. I always gave it a pass, even though it made me cringe a bit.

I don’t think he should have been given a pass. Ironic racism that trots out old stereotypes nevertheless promulgates those stereotypes. His staff apologized, and I agreed with those who said they should have done so. 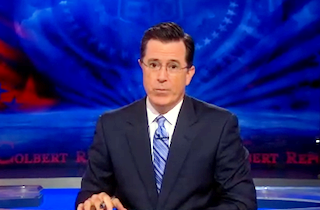 After a tweet from The Colbert Report's account outraged the Asian-American community and sparked a #CancelColbert campaign, both Stephen Colbert and his employers at Comedy Central apologized, with the latter taking responsibility for accidentally...

. . . for only one incident, a tweet, whereas he did it multiple times over the course of the show, as noted in the link:

To note: “Ching Chong Ding Dong” has been a Colbert Report staple since the show’s launch in 2005, and is a fairly meta bit wherein Stephen Colbert’s pundit character pretends to be anothercharacter (a bucktoothed Chinaman stereotype), and sees nothing wrong with it because “there’s a difference between me and a character I’m doing.”

And then there’s the incident with Michael Richards at The Laugh Factory.

The quotes in the title should be around “comedian”, not “punched”.

I think one of the important takeaways here is that there often is absolutely no need for racism to make many funny bits work.
My case in point would be comedian Bill Dana, who used to do the character of José Jiménez on the Steve Allen show in the 50s/60s. After a few years of doing this character (and after public protests by Hispanics), Mr. Dana appeared to have grown a conscience, and later made a public apology at a cultural pride festival.

The thing is, the bits work great without the racism! There was never any need for it.
You simply have a character playing the fool - and I don’t even mean mentally challenged - and it works.

Ed Sullivan: "Well, now I see you have some of your space equipment with you. Uh, what is that called, the crash helmet?"
José Jiménez (as an astronaut): “Oh, I hope not.”